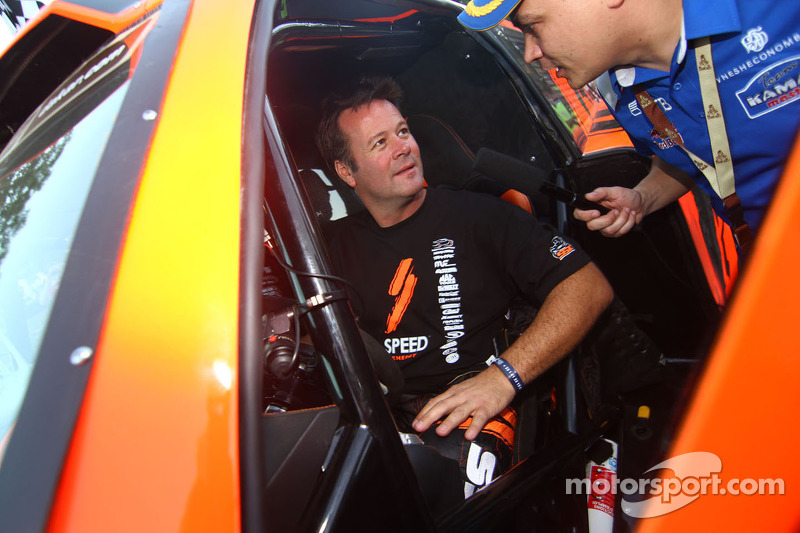 Apdaly Lopez of Tecate, B.C. Mexico entered racing’s history books Friday at the Indianapolis Motor Speedway by capturing the win in the second of two Menards at the Brickyard by TRAXXAS races and securing the overall win with the highest average finish in the two races. It marked the first time in the 105-year history of the famed Brickyard that trucks raced on the property.

Lopez, 19, driving the VisitMexico.com/RPM Off-Road truck was making his eighth start in the Formula Off-Road Presented by TRAXXAS series. He is second-generation off-road specialist and is an up-and-coming star in the TRAXXAS series and the deserts of Baja.

Robby Gordon (in photo) won the first of the two races at Indianapolis in the Menards/SPEED Energy truck and finished fourth in the overall standings given his sixth-place finish in the second race. Lopez finished third in race one before winning race two.

“I just kept looking in my mirror and would see the guys behind me start racing,” Lopez said. “I wasn’t going to make a mistake and when they got close I just gave it a little more and pulled away. What an honor to win a race at Indianapolis.”

On the warmup lap for race one, Charles Dorrance of Austin, Tex. aggressively hit the second of two 36-inch tall ramps on the course and nose-dived his truck into the infield grass of the Speedway and tumbled end-over-end for several hundred yards before climbing out of the destroyed Stadium Super Truck under his own power. He was transported to Methodist Hospital in Indianapolis and treated for a rib injury.

The Formula Off-Road Presented by TRAXXAS series moves to the Detroit Belle Isle Grand Prix for three races May 30-June 1.