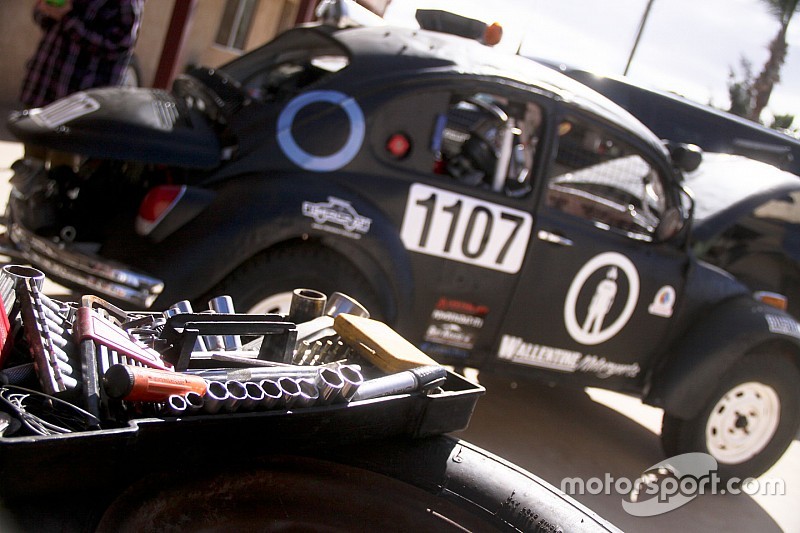 In our battered and beaten up 1970 VW Beetle we had a plan for the Baja. The Baja laughed! Actually, I think it just scoffed nonchalantly.

For most of the 239 competitors the Baja is by far the biggest race of the year and every team is stretched to the limit to get their car fast and reliable and to run all the seriously complicated logistics. But there are some crazy fools out there who try to take the 1000 on with totally unsuitable vehicles; the Class 11 masochists who enter in pre-1973 Bugs with only minimal modifications. I know they’re crazy, because I am now one of them. This is the story of the Desert Dingos attempt to take on toughest off-road race in the world… in a 45 year old road car.

All the news and Youtube video clips from the big boys, the Trophy Trucks with their 850bhp V8s roaring and 40 inch tyres kicking up huge plumes of dust, and Shannon Campbell in his Ultra4 car getting 15th overall after only deciding to race the week before. These are all super-sophisticated purpose-built trucks, and yet only half managed to survive the 820 miles. Our car was the Mad Media sponsored 1107… designed in WW2 for ferrying Nazis around occupied Europe…

Pre-tech is an opportunity to make sure that everything is right with the car before taking it to the main scrutineering and there was a top Class 1 car in front of us. After a couple of days of thinking that 1107 is a race car it looked (and sounded) like a spaceship. Its $500,000 pricetag was out of this world too. But the coolest thing… the driver came to us to say that we are the real Baja drivers! That put a smile on our faces.

Jim Graham is the man behind this mad adventure. He watched Dust to Glory, the movie about the race in a slightly to impressionable mood and as the end credits rolled up decided that he wanted to win the Baja, in what he mistakenly thought was the cheap class. There is no way to do the Baja on a reasonably budget. That long dreamed of victory has eluded him since he started the team in 2007, but this was to be the year…

What should have been a quick pre-race check up turned instead into a flash of panic when a big puddle of petrol began spilling underneath. A dead fuel sender on top of the tank was the cause… but with petrol all over the floor pan we knew how close we’d come to a really big mess up. We got it going again but then the brakes were soft… so another important mechanical element had to be fixed. Fortunately Beetles are popular cars in Mexico and parts are much easier to find for us than any other car in the event. Instead of needing to get things machined in specialist workshops we could go shopping in breakers yards!

All (hopefully) fixed and it was time to visit our host Dennis Hollenbeck’s project, the Casa Esperanza orphanage, where all the kids got their hands painted and put them on the car. Then they put on cardboard boxes decorated as cars and had a race around the garden, which was brilliant fun… But then it was our turn. Grown men with boxes on their shoulders and around their waists running for all they were worth was just pure gold. And they did better than 1107. It would get in gear… so it was back to the yard with a sense of resignation where the engine and gearbox were pulled out. The problem was found with the worn selector. Everything was OK, we had seven hours to go before the start what could go wrong?

I spent some time practicing changing the fan belt and spindles, both Class 11 issues and then learned how to work the GPS unit which was going to be my main job as co-driver. Oh, and getting the Maxtracks out ready for the car swallowing silt beds.

Raceday. Up at dawn to try the disaster in a pot that Jim manages to call coffee with a straight face… There were three jugs of fuel, 91 octane, race fuel at 111 and a mix of both at the optimum 101. 101 should have gone in… It was an easy run to the start and the team stood around handing out flyers (or hero cards) as Jim calls them. I saw the first cars head off, Robby Gordon flat out, sluing along the famous, but foul smelling wash, just feet away from the deathwish spectators. An hour or so later the queue of cars in front thinned out until it was driver Romy Frederik and his co-driver wife Jenn’s time to start. The crowd of excited onlookers pressed in against the T-shirt stands and the podium with Pantera's Walk thumping out of the Monster Energy stand. Surely a good omen. We were first in the class to go. Roger Norman reached in through the missing windscreen to shake Romy’s hand and then the green flag was lifted. All 75bhp were unleashed and the little car bimbled off around the first corner. If it was a full 3 minutes before we managed to get to the chase car where reports of the problem came in. The Bug was pinking, *pinging in American) then backfiring. And the bad running was causing a lack of power and serious overheating.

Preparing for the race and being out on the course is only half the Baja, it's the guys in the chase cars and manning the pits that have as much responsibility to keeping the car going as the drivers. Some chase crews have more work to do than others. Cyrus Roohi was the man for this and he jumped into action straight away.

Bugs are apparently quite sensitive to bad fuel so it was obvious to the experienced guys that the wrong fuel had been put in so Gil and I changed direction from heading to the planned driver change at Race Mile 70 and went to buy as much octane boost additive as we could. 20 miles up the road we found Romy and Jenn next to a dead Trophy Truck and poured all 15 bottles of boost into the VW’s tank. All sorted! They set off again on the rough, sandy track a bit faster than I thought would be possible, cheered by the locals who'd stayed to watch the absolute backmarkers. 15 minutes were lost. That might mean a lot to the top runners… but not so much for us. There was still everything to fight and hope for. We were still well in the race!

A little more stressed than we would have liked we drove at about the speed limit to the change point… but with some furious crackling of the VHF race radio we understood that something still wasn't right. Communication in the wastes of the Mexican wilderness is pretty hit and miss, so not knowing what was going on Gil and I put our suits on in anticipation… and waited.

A cool system we had this year was Iridium Go, a satellite connected app that connects phones via in-car Wi-Fi and we got some news from Jim's wife Roxanne who was manning the live timing on the internet back in the US. Car misfiring, car stuck, car dying… Romy used to work for the US Army as a mechanic so the back of the Bug is not so much of a challenge, but the middle of the Baja 1000 is not really the best place for fault finding via a process of elimination. The fuel pump was changed, the timing reset, carburettor cleaned… And then we got a strange message. Scooping the gloop out of the fuel tank. It didn't make much sense until they worked out that a chemical in the octane boost had reacted with the baffling foam in the tank and blocked the fuel system with a chemical morass.

Time ticked on, darkness fell, but Gil and I were still expecting to get in for the next stint. It wasn't to be though. The first checkpoint closed and we were still 40 miles away from it. Some of us paced up and down, some slept, I listened to the random mariachi band that had turned up to play the upbeat theme tune to our defeat. Then CP2 was closed. Done. Race ended by a chemical reaction. Science, bitch! We pulled into a roadside cafe, walls and windows decorated with the stickers of other losers who'd only got this far in years past. We weren't the first to fail and even got further than some Trophy Trucks but there was no sense of achievement, just a bit of team bonding in our bitterness. The achievement goes to Paul Nauleau in the CBCFS Racing car, Dennis Hollenbeck and my friend JT Taylor's crew, who despite the odds (and there are many for the Class 11s) spent some 40 hours out on the course and pulled back into Ensenada to an empty car park, long after the organisers had packed up and left. No Class 11 is officially finished again, just these three out of seven starters made it back.

The car is ready to go again though, so the plan is to mount a devastating attack on the Mint 400 and shower ourselves in glory back in Mexico next year.

Special thanks to Dennis for the bunkhouse and the yard, his wife Debbie for the cookies and JT for the race suit.