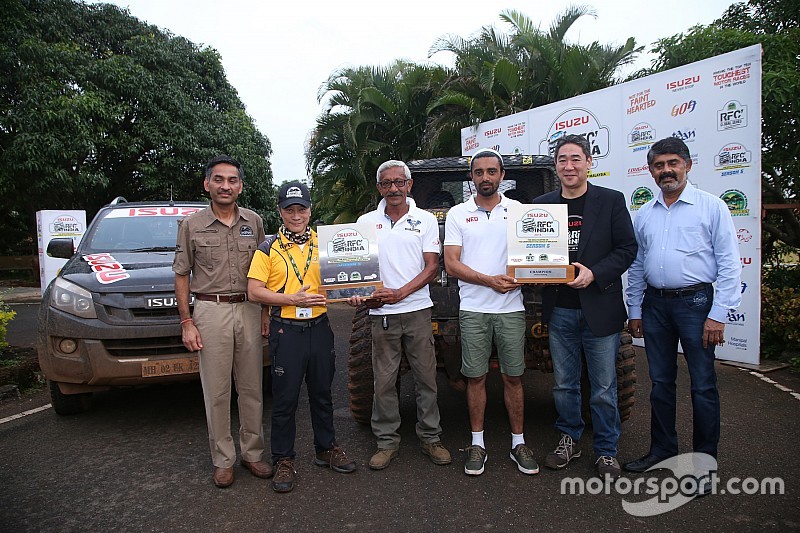 V5 Offroaders’ Nanjappa, who is ably assisted by co-driver Chetan Changappa, seized the lead on Wednesday and extended his advantage from there on, eventually finishing 157 points clear of the rest of the field.

Having lost the 2017 title narrowly to Gerrari Offroaders’ Gurmeet Virdi, Nanjappa will now get to represent India at the RFC Mother Event in Malaysia later this year as part of a $10,000 (Rs 6,80,000) reward that includes the entry.

“This is an incredible feeling. I would like to thank my co-driver, my service team and my buddy – the Jeep – all of whom put up a fantastic performance,” he said.

“We enjoyed every moment of this competition, specially the challenging ones. We were prepared for a tougher and more competitive event this time and we knew that we had to maintain the lead from the very start.

“The conditions of the competition were highly unpredictable and kept varying from contender to contender. In the end, I think these conditions worked in our favor and piloted us to the victory.”

Malaysian driver Mervyn Lim (co-driver Alex Tan) of Team G.O.A. made major in-roads during the latter stages of the event, overtaking Virdi on the final day to secure the runner-up spot.

Lim and Virdi (co-driver) ended just 49 points apart after nearly a week of gruesome off-roading in the southern region of South Goa.

Behind the podium finishers, Sanbir Singh Dhaliwal (co-driver Gurpartap Singh Sandhu) of Gerrari Offroader claimed the fourth spot with 1742 points, 264 down on winner Nanjappa’s tally of 2006, while the top five was completed by  Chaitanya Challa (co-driver Shabarish Jagarapu) of G.O.A. Fairmont.

Chow Ujjal Namshum and his co-driver Ingpeng Mein finished sixth and bagged the Rookie of the Event award, while the Team Award was presented to Gerrari Offroaders.

Mr Aashish Gupta, Direct of Cougar Motorsport which now owns the right to organise the Indian edition of RFC until 2022, said: "We witnessed an unprecedented intense level of competition this year. Given that we continuously upgrade the toughness quotient of the Special Stages every year, with a supplementary addition of night stages this time around, I had expected the competition to be highly challenging.