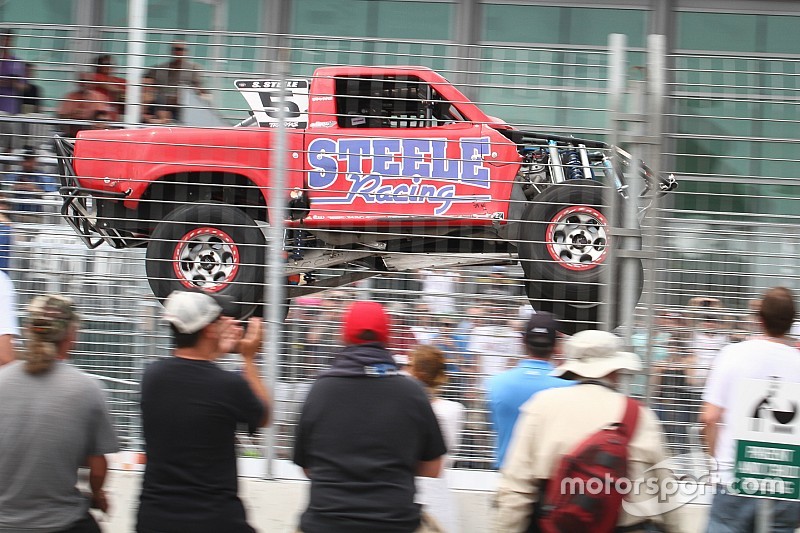 Six days after a hospital stay following a crash.

Steele inherited the lead on the first lap from TRAXXAS driver Keegan Kincaid and led every lap. Just as the race got started in front of a large and enthusiastic crowd that came to watch the SST trucks fly off of the three-foot-tall man-made ramps, Toronto’s Russell Boyle failed to negotiate a ramp on the front-stretch and ended up on his side. While the young Canadian driver was unhurt, he did retire from the race which was his first career SST start. Boyle finished ninth.

While Steele made the race look easy from the front, veterans Sheldon Creed and E.J. Viso battled fiercely for second behind the red LIVE/Think Loud Entertainment TRAXXAS truck, with the position decided only when Viso lost control of his own LIVE/Think Loud Entertainment truck and flipped the truck bringing out the second red flag of the event. Viso was also unhurt in the accident and was credited with the eighth finishing position one lap down to the field.

The ramps launch the trucks as much as 20 feet in the air and 150 feet down course. The series features identically prepared trucks made to resemble their scaled-down Traxxas radio-control-car counterparts, and like their Traxxas namesake are designed to take flight and stand up to rough driving. However, unlike RC trucks, they produce 600 horsepower generating speeds upwards of 130 miles per hour and race on DOT approved Toyo Tires.