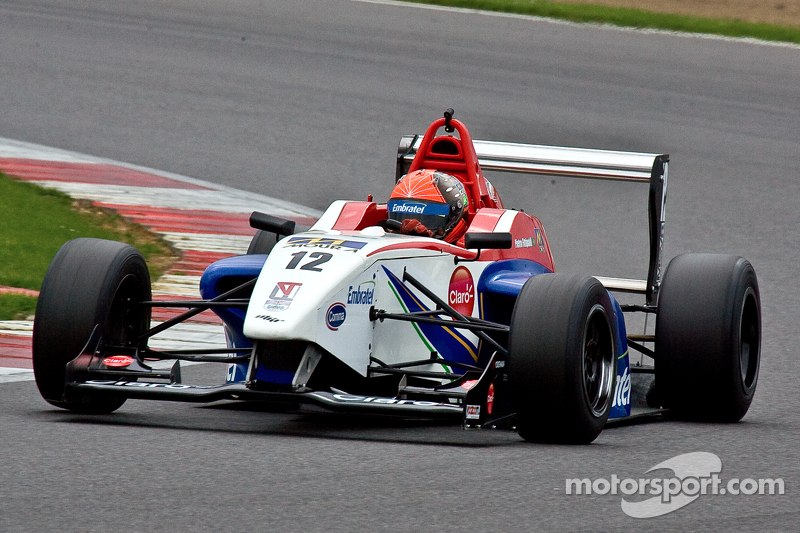 On the final lap at the Brands Hatch Grand Prix circuit, Pietro Fittipaldi took his first victory in the BRDC F4 Series.

He had been running in a comfortable third place having started second, but moved past Charlie Robertson late on, and then passed an ailing Jake Hughes on the last lap to claim his first win. Fittipaldi follows in the footsteps of his grandfather who also claimed his first win in Europe at Brands Hatch in 1969 in Formula Ford 1600.

"When I saw the chequered flag I couldn't believe I was the first one to cross it, it was awesome!" he exclaimed afterwards. "I just kept my cool on track and was really consistent all the way around and I can't believe I've got this win in my first year!

I'm following in his footsteps in a way so it's really nice.

"I thought it was going to be a learning process which it still is, but I just can't put this into words!"

When reflecting on the symmetry of taking his first win in cars on the same circuit that his grandfather did, Fittipaldi reflected: "That is so cool. I'm following in his footsteps in a way so it's really nice.

"It's going to be tough now starting from eighth on the grid for race two tomorrow, but I'm looking to keep it on track and keep working on my consistency which was pretty good during this race. If I can get a top five finish I can hopefully get a good lap for the third race."

Seb Morris claimed second for Hillspeed, with Robertson third for HHC Motorsport despite suffering a gear shift issue that left him stuck in fifth gear. Lanan Racing's Jake Hughes had led the race for the majority of the event, and was seemingly on course for the championship lead, before being scuppered by a late race mechanical issue which dropped him to fourth on the last lap.

Fittipaldi, Morris and Robertson were all presented with their trophies on the podium by BTCC star Tom Onslow-Cole.