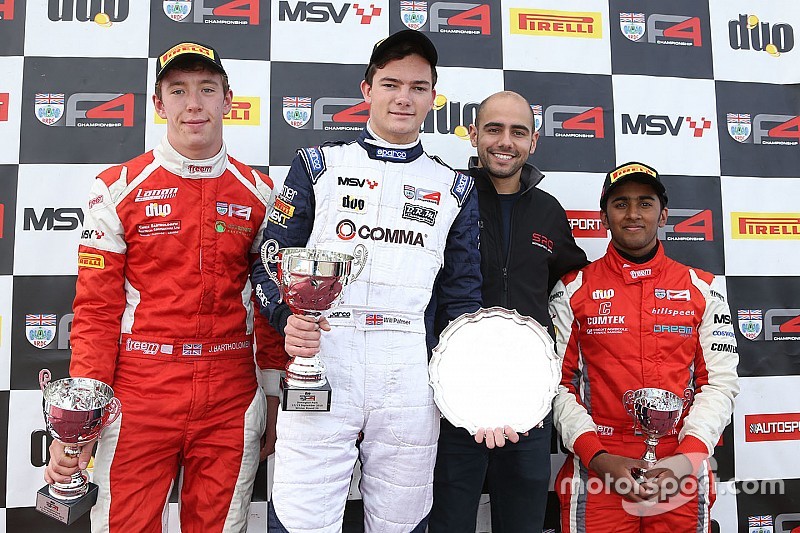 A double delight for Hillspeed's Ameya Vaidyanathan in the seventh round of the BRDC F4 championship as the Indian driver notched up two podiums at Donington Park circuit.

Heading into the weekend, Rabindra was 14th while Vaidyanathan 17th in the standings, headed by HHC Motorsport's Will Palmer.

The Hillspeed driver carried the momentum into qualifying as he finished fifth, only 0.299s off polesitter Newey. Vadiyanthan clocked the second-fastest time, but it was disallowed due to exceeding track limits.

Rabindra, on the other hand, under wet conditions, ended 12th as Palmer took second behind Newey and Chris Dittmann Racing's Tom Jackson ended third. The Indian was provisionally fourth but lost out as the track dried.

Podium for Vaidyanathan; points for Rabindra

A calculated drive from Vaidyanathan saw him achieve his second podium as Newey claimed his first win of the season while Palmer ended second and the Indian driver third.

Vaidyanathan gained a place at the start but dropped two positions thereafter, running majority of the race at fifth until the last three laps when Omar Ismail (Chris Dittmann Racing) and Chris Mealin (Lanan Racing) collided which allowed the Hillspeed driver to move to third.

"It felt as good as the first one," said the Indian after the race. "It was about keeping up with the people ahead of me and then pouncing when they made a mistake.

"That is exactly what happened so it is a really good feeling. I kept my vision forward as I didn’t want to go backward, so I just kept the momentum up and took third," he added.

Rabindra finished ninth in the first race after having started 12th. The Indian gradually made places and move up and finish ninth to take home some valuable points.

Another for Vaidyanathan; incident with Rabindra

After a solid first two days, the Vaidyanathan continued his good run in the penultimate round clinching another podium as Palmer took the win while Lanan Racing's Jack Bartholomew finished second.

The Indian started sixth but lost a place at the start, dueling with Ciaran Haggerty (Graham Brunton Racing). Both drivers gained places when their rivals got penalised for exceeding track limits.

The back and forth battle saw Vaidyanathan winning the place from Haggerty on the final lap moving him on the podium and finish third.

"It was a little confusing with the time penalties, but I managed to keep up with those in front and make overtakes where I needed to," said Vaidyanathan after the race.

"There was a lot of dicing going on and the last corner was very tight so it is all a bit of a blur, but it is a great result with another podium," he added.

However, it was a disappointment for Rabindra after an incident with MGR Motorsport Michael O'Brien on lap nine.

The British driver lunged on Rabindra going into the Melbourne hairpin which ended O'Brien's race and pushed the Indian down to 16th in the second race.

Points for Vaidyanathan and Rabindra

The final race of the weekend saw Vaidyanathan starting sixth and finishing seventh, rounding off three point scoring races for the Indian.

The Hillspeed driver was again involved in a battle with Haggerty but this time, the Scottish driver managed to pass Vaidyanathan on lap five Thus, he finished seventh after failing to go past Haggerty.

With the win, Palmer clinched the BRDC F4 title as Rodrigo Fonseca (Lanan Racing) finished second and Newey third in the final race of the weekend.

Rabindra had a gritty race starting from the back of the field. The Douglas Motorsport driver moved to 14th in the opening few laps.

With constant battles, he made his way up to finish 10th to score more points. "It was a decent weekend barring the unfortunate incident, I hope to do better at Brands," said Rabindra.

A fantastic weekend for Vaidyanathan saw him jump to 11th in the championship with 187 points while Rabindra stayed at 12th with 183 points and Palmer sealed the title with 503 points as they head for the final race at Brands Hatch in two weeks time.