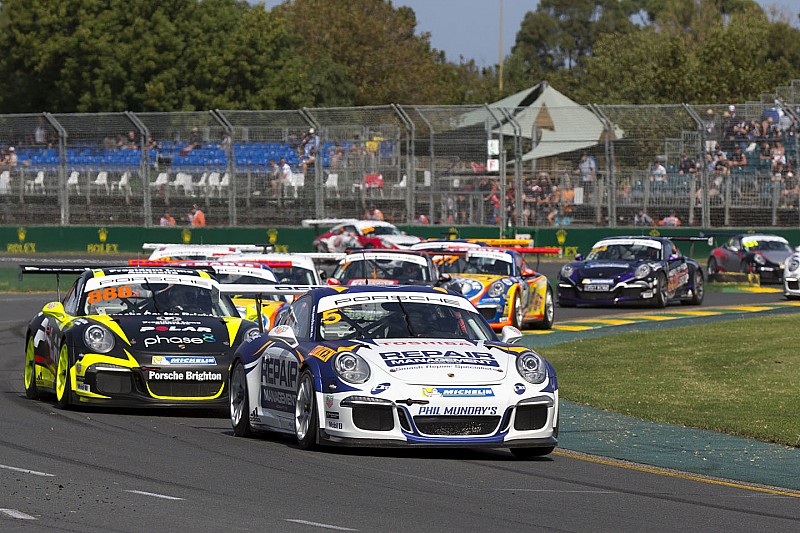 The Australian Carrera Cup series will impose a limit of 10 ‘professional’ drivers when the new 911 GT3 Cup car is introduced for the 2018 season.

The move comes as Porsche looks to bolster its stock of amateur drivers in the one-make series, following a dip at the semi-professional and gentleman driver end of the grid thanks largely to the Australian GT boom.

The limit will mean there will be no more than 10 front-running professionals on the grid next season, with effectively just nine 'Pro' spots up for grabs thanks to the graduation programme through the GT3 Cup Challenge series.

“The pros will come and go, the pros will use Carrera Cup as a stepping stone to further their career. But the semi-professional drivers will be the backbone of Carrera Cup, they’ll stay one year, two years, three years.

“We’ve built everything around them, so we need to have a maximum number of those types of customers. We need to make sure the numbers are right.”

The relative lack of amateur participation has taken its toll on grid sizes this season, with an average field of 14.5 cars so far, and an average of just four non-professionals.

The limit on the pro drivers is one of several measures being put in place to woo amateur drivers back to Porsche racing. Another incentive is a third tier in the category, with non-professional drivers set to be classed as either Pro-Am or Am depending on past success and experience.

The non-professional drivers will also be able to use an ABS system with the brand new 911 GT3 Cup car, something not available on the current-spec car and a move clearly aimed at GT3 drivers.

That won’t be category-wide, though, with the pros not using the ABS.

Ellis also reckons simply having the new car – which was unveiled at Phillip Island on Friday evening – will help win back a portion of the gentleman driver market, attributing this year’s downturn to a lack of excitement over the existing package.

“That’s because the current car is in its fourth year. It’s not the sexy new girlfriend anymore, so we lost some of the semi-professionals that went to other series like GT,” he said.

“So we anticipate that we’ll get some of those customers coming back.

“If you want to grow any business you need new customers. You can’t keep recycling existing customers, because eventually they’re not there any more.

“So the actions we’ve taken are designed to bring new customers into Porsche motorsport.”

Ellis added that he’s confident of filling a full 24-car grid for next season, although admitted that it will only be now that the new car is on sale that interest can be properly gauged.

“You never can tell. Talk is cheap,” he said. “Out of all the people that tell you they want to go motor racing, one in 100 actually does.