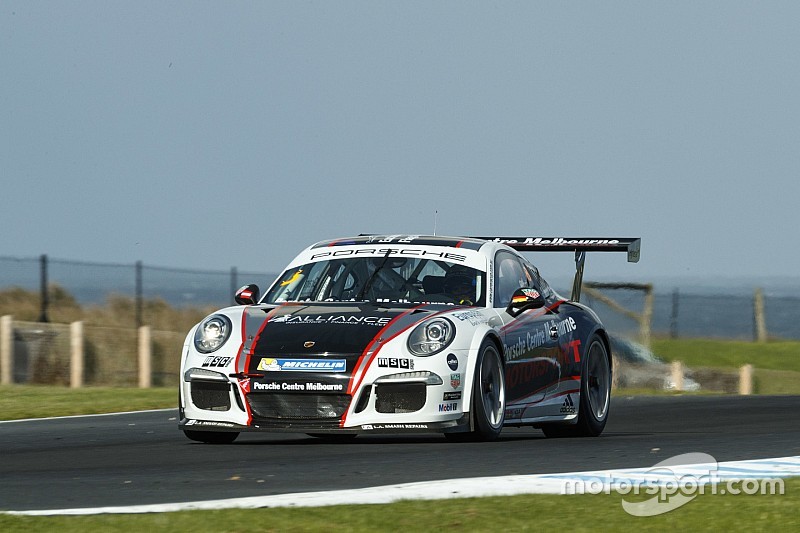 Supercars driver Holdsworth and co-driver Grant had to come back from being more than a minute down in the first stint to take over the lead, while Holdsworth was also forced to nurse wet tyres on a drying track for the entire second to claim a six-second win over Alex Davison and Geoff Emery.

It was Daniel Gaunt that put in the most extraordinary first stint of the race, going from starting in pitlane right at the back of the field to having a 25s lead within four laps.

The Kiwi only ended up back in the lane as the race started thanks to making a last-second call to switch to wet tyres – and it proved to be a genius move. While those that started on slicks wobbled around and all had to head back into the pits under green conditions, Gaunt streaked through the field and off into the distance.

The lead went from a quarter of a minute after four laps to 31s after five laps, and almost a minute on Lap 9.

Unfortunately for Gaunt and co-driver Sam Shahin, that’s where their luck ran out. When Tim Miles and Anthony Gilbertson got together coming onto the main straight, leaving Gilbertson in the wall, the Safety Car appeared, and the massive advantage disappeared.

Gaunt did manage to quickly pull the gap back out to 12s over Rob Woods and Dean Grant after the restart and before the stops, but it wasn’t enough. With Shahin in the car, and the likes of Lee Holdsworth and Duvashen Padayachee taking over in the second and third-placed cars, the lead didn’t last long.

Within a couple of laps Holdsworth took over the lead, and this time it was the Supercar star that was able to pull a quick gap. With 20 minutes of a now time-certain race to go he had a 16s lead over Padayachee and Shahin, while Alex Davison (who had taken over from Geoff Emery) was a little over a minute back in fourth.

However, while the leading three cars were on wets, Davison had made the bold gamble to switch to slicks at the stops. And with the track drying, he was flying. However, he was still over a minute off Holdsworth in the lead.

Davison’s progress was rapid, moving into third with 13 minutes to go, and then second with a few minutes remaining. But he couldn’t quite catch Holdsworth, who held on to win by just six seconds.

Andre Heimgartner pulled a similar move to Davison, a big large stint on slicks after taking over from Aaron Ireland leading to third spot. David Wall did likewise, finishing fourth with Shane Smollen.

Padaychee dropped to fifth in the end, while Shahin slipped all the way back to ninth by the finish.

Yesterday’s race winner’s never really got going, Dylan Thomas stalling while trying to launch from pole position. He was clipped by Adam Gowans, which led to a lengthy stint in the pits.

Thomas eventually got back on track, albeit 10 laps down. Nick McBride then took over the car with the hopes of salvaging a few points, but was ultimately not classified.