New cars take to the track in Adelaide

Warren Luff and Shane Smollen were setting the pace.

Porsche Carrera Cup Australia formally introduced its new fleet of Porsche 911 race cars to Australian motorsport at the opening day of the Clipsal 500, with Warren Luff and Shane Smollen setting the pace. 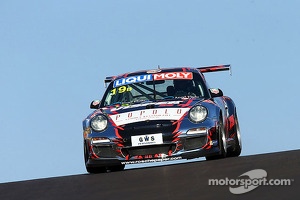 Pace-setter Luff was pleased with his pace, though he believes there is the potential for vast improvement in lap times as the event progresses.

“I’m really happy with today’s pace. The 2014 GT3 Cup car really suits this circuit; it’s a fair bit faster and the times showed that today. I think it will be interesting to see how much faster we all go in qualifying,” said Luff.

“Everyone is still trying to get their head around what they’ve got to do to get the most out of the car. It is an on-going learning process but the good thing with these cars is that it’s not what you can do with them, it’s more up to the driver. That’s what makes the category so good.”

“The new car is an evolution in every aspect to the previous Carrera Cup car. A lot of people say that it’s more like a GT car; to me it just works a little bit better in every way. I think we’re all still looking for a set up that’s ideal for the characteristics of the car,” said Smollen.

“I think we made good progress. We’ve really only had the shakedown and a half-day test so I’m really happy to go out there a post some good times.”

Porsche Carrera Cup Australia, which welcomes Michelin as Event Partner for the Clipsal 500, will hold Qualifying and Race 1 on Friday, Race 2 on Saturday and Race 3 on Sunday.

Almond graduates to Carrera Cup in 2014

Percat to partner with Smollen at Phillip Island

Porsche Cup Brazil to be broadcast on Motorsport.tv