Ste Agathe, QUEBEC, Sept 9, 2012 - After taking a lead on the very first stage of the 2012 Rallye Defi, Ken Block (Park City, Utah) and Alex Gelsomino (Park City, Utah) drove through bright sun, heavy rains and over rough roads on their way to victory. The Monster World Rally Team pair led the rally from start to finish, thrilling the fans at the fourth round of the 2012 Canadian Rally Championship.

“It wasn't all that easy, but it was a lot of fun,” said Block after the rally. “These roads here are quite amazing, so I really enjoyed myself.”

These roads here are quite amazing, so I really enjoyed myself.

On the very first stage of the rally, Block set the fastest time, beating his closest rival by 19 seconds. Over the following three stages, the team opened up a lead of nearly a minute.

Block and Gelsomino continued to maintain their lead trading times with Antoine L'Estage (Ste-Jean-sur-Richelieu, Que.) and Nathalie Richard (Halifax) through the second day. Although L'Estage has won the Rallye Defi six times, he did not have an answer to the pace of the leader and finished the event on the second spot on the podium.

“There were a lot of different challenges this weekend,” said the reigning Canadian rally champion. “We knew Ken would be really fast. I think he's improved a lot as a driver, and they have basically a World Rally Championship car. We have to be realistic, our cars are not quite like that. 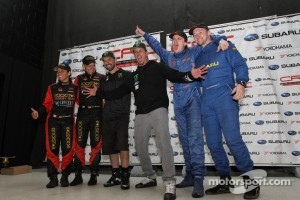 “I thought on my own turf I could match him, and I was driving really hard. It's always good to have good competition. It's always very fun to drive as hard as we could on Friday.”

Driving at the limit all weekend took a toll on L'Estage's car. Suffering two flat tires with seven kilometres remaining in the stage, L’Estage was forced to drive without stopping, losing more than 90 seconds and dropping even further back. Problems in the transfer case meant the crew had to rush to replace the part during the midday service.

“Today was not a great day, but at the end we're in second place,” said L'Estage. “It's very good points for the Canadian and North American championships, so it's not bad. I don't like to be second, but if we look at the big picture, it's not bad.”

“I've never been this tired at the end of a rally, to be honest,” said Urlichich, who is second in the Canadian points standings. “I feel very happy. We were off the pace a bit this afternoon. I don't know how much is the driving and how much is the car.”

On the very first stage, the pair suffered driveline problems, losing power to the right rear wheel of the car. The pair had to contend with the problem for another three stages before they could have the service crew attempt repairs.

As a result, further components suffered damage, while at the same time, the car began to overheat, a symptom of failing head gaskets.

After a furious effort by the team to replace both the gearbox and the engine overnight, things appeared to improve for the team. But failure of a shift cable meant they had to take a penalty for leaving service late.

Despite these issues, the team was able to keep a secure hold on third place, rounding out the podium.

The first four stages of the rally were so rough, that they claimed ten cars. Saturday's difficult conditions cut the field down even further, with only 13 of the original 29 cars arriving at the final time control. 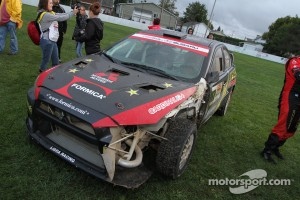 Pat Richard (Squamish, B.C.) and Alan Ockwell (Toronto) were one of the teams eliminated early, when mechanical problems sidelined the team just a few hundred metres from the finish of the third stage. It was a devastating blow to the team, who needed a strong performance to revive their championship ambitions.

In two wheel drive, only one car – the Ford Fiesta R2 of Ed McNelly (Dalton, New Hampshire) and Ole Holter (Long Beach, California) – made it to the finish. Even so, the rally was not easy, with the pair having a light roll on Saturday. With spectator help, they righted the car and made it to the finish.

“Friday morning, those stages were really really rough,” said McNelly, who was competing in his second Canadian event, having won Rallye Baie Des Chaleurs in July. “We picked our way through it. We made it to start today.”

The Rallye Defi was dramatically changed from last season after competitor input. New roads were found to add to the stage distance and the challenge, and were widely praised by the competitors at the 2012 edition.

“We had a great event this year,” said rally organizer B. Gilles Lacroix.“Partly it was the weather, and partly it was the new stages we put together. I think the first four stages made a big difference.”

Russell: Hamilton gets better with age "like a fine wine"