Kreim and Young content with APRC season despite defeat to Gill 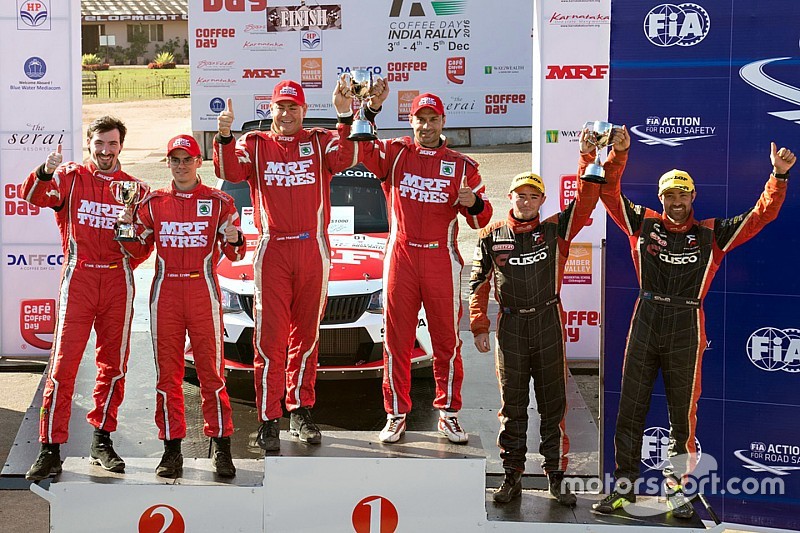 While 2016 marked Kreim’s first rally outing outside of Europe, Young had to deal with a Subaru that is increasingly nearing the end of its cycle.

Given the circumstances, neither were too discontent with losing the title to India’s Gaurav Gill, who swept the season with six out of six wins.

“I would say the whole season has been good,’’ Kreim, who finished runners-up in the standings with 138 points, told Motorsport.com.

“It was my first season and New Zealand was my first rally [outside of Europe]. I’ve never been to a gravel rally before. It’s really low speed.

“With every rally were going faster and faster. In the final round in India, we had the best speed. But unfortunately I made a mistake in leg 1.

“Overall, It was a good step in the right direction and a very good experience to rally in Asia-Pacific.”

Young, likewise, was pleased with his personal performance - and felt he was able to show his potential in some of the high-speed rallies of the season.

“It’s been very good season for me,’’ the New Zealander told Motorsport.com having ended up third with 119 points in the standings.

“I’m very happy with the pace I had most of the time. Especially in the faster rallies I was able to push more and take some stage wins.

"We have been third all the time, with just one DNF this year. I didn’t make too many mistakes either,” he added.

When asked on the future programme, Kreim said it rests entirely upon backers Skoda, with the German not having enough funds to take things in his own hands.

“I cannot decide [where I would be driving next year] because I don’t have the money [to do so],’’ he said.

“If Skoda decide we take part in APRC again, then I will be back for a second season. If they only have money for the German championship, then I would be happy to defend my title.”

Meanwhile, Young’s future looks more secured than his German rival, with the 23-year-old looking forward to another year in APRC.

And alongside it, the Kiwi is aiming for occasional appearances in New Zealand and Australian Rally Championship. He, however, has no plans to move to Europe in the near distant future.

"At this moment I’m are not really sure, but hopefully there will be something," he added.