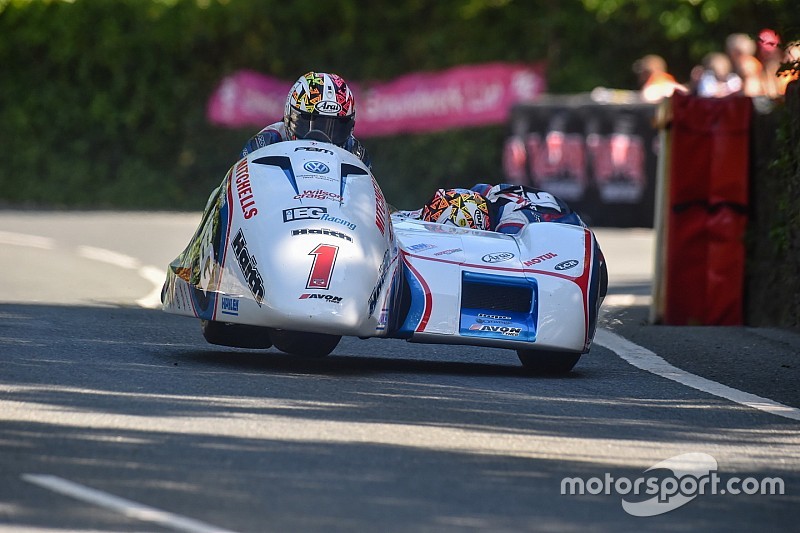 The 50 entries that have been accepted for the two three-lap Locate.im Sidecar TT Races at this year’s Isle of Man TT Races fuelled by Monster Energy include five former race winners in the field who have no less than 27 victories between them.

The high quality field includes 14 teams that have already lapped the Mountain Course at more than 110mph, and the top thirty have all lapped at more than 105mph.

Ben and Tom Birchall will again line up at number one and having taken a double victory last year, as well as improving upon their own outright lap record, they will start as race favourites. The Nottinghamshire brothers now have six wins in total, including the last three in succession, and will be confident they can add to their tally of wins.

Dave Molyneux and Dan Sayle, the most successful driver and passenger in TT history, will set off 10 seconds behind them. With 17 and eight wins respectively, the Manx duo have an outstanding record and will be keen to get back onto the top step after just one podium finish in the last two years, with Molyneux’s last victory in 2014.

The evergreen John Holden, who again lines up on the Silicone Engineering-backed outfit with Lee Cain in the chair, goes at number three. Competing together for the first time in 2016, the pair secured a brace of seconds with Holden having now finished on the podium in the last eight races. A winner in 2011 and 2016, the Blackburn driver will be aiming to take win number three.

Alan Founds who finished third in 2016 and fourth twelve months ago, moves up the order to number four. Backed once more by former TT driver Brian Gray, the Cheshire runner lapped at an impressive 115.11mph last year and continues with Jake Lowther in the passenger’s chair. The duo are more than capable of getting on the rostrum - at least - this time around.

Multiple World Champion Tim Reeves is fifth on the grid. The Kent driver, who will again be partnered by Mark Wilkes, who made his debut last year, only has one TT win to his name to date - winning the opening race of 2013.

The second Founds brother, Peter – who joined the 114mph Club in 2017 becoming the ninth fastest driver of all time in the process – will follow Reeves down Glencrutchery Road. With Jevan Walmsley on board for a third successive year, they will be hoping to repeat their podium finish of 2015.

Local driver Karl Bennett takes the number seven plate having taken two top 10 finishes a year ago - the best of which was fifth. He continues with Frenchman Maxime Vasseur in the chair with the father and son duo of Steve and Matty Ramsden next to set off down Glencrutchery Road.

Gary Bryan, returning after a year’s absence, goes at number nine.   The Lincolnshire driver had no less than eleven top eight finishes between 2010 and 2016 and with Phil Hyde on board, will again feature heavily towards the top of the leaderboard.

Conrad Harrison is the last of the seeded riders at number 10.  The Bradford driver won the opening race of 2014. He took a strong third place last year, after a disappointing 2016, and with ten podiums to his name, both he and Andy Winkle have a great chance of adding to that tally.

France’s Estelle Leblond/Melanie Farnier, the fastest female driver ever, Mike Roscher/Ben Hughes and Michael Grabmuller/Sebastien Lavorel lead the overseas challenge while Gary Horspole, a podium finisher in 1998, 2000 and 2003, returns for the first time since 2007. He has the experienced Robert Biggs in the chair.

Newcomers include Michael Jackson who teams up with Harry Payne and French rider Paul Leglise while there are also four passengers who will be tackling the TT Mountain Course for the first time.

Your one-stop shop for the Isle of Man TT races