(Petaluma, CA) - April 2nd - The recently announced partnership of Aston Martin Racing and TRG made waves throughout the motorsports world, and the Vantage GT4 of TRG-AMR North America has already made appearances testing and racing around the country. Next season, TRG-AMR N.A. is scheduled to debut the GT4 Challenge of North America "One-Make" series. Today, the company announced that the future of that One-Make series is in good hands with LisaKay Golde taking the reins as the Race Series Director. 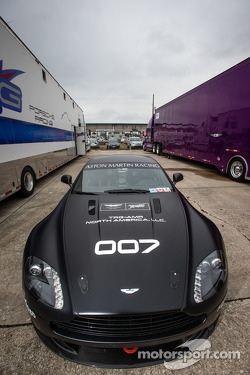 With the Vantage GT4 race car being one of the hottest racing platforms and its popularity globally, Golde's wealth of knowledge on running a successful One-Make race series will bring further excitement to the budding plans of TRG-AMR North America. Golde was Race Series Manager for the Panoz Racing Series, and prior to that was heavily involved in the business development of the racing school. When Dr. Panoz sold the school and series in 2008, Golde stayed with Skip Barber Racing, and has since honed her skill with Robertson Racing, Ranger Sports Racing, and most recently, the North American Road Racing Association (NARRA) as Series Event Manager. In addition to her impressive resume, Golde holds an SCCA National License in Timing and Scoring, as well as experience controlling the pit lane for Formula 1 and MotoGP. As a result, she has gained valuable insight into the operation of series owners, teams, and most importantly, drivers.

The Vantage GT4 Challenge of North America is scheduled to begin in 2014, featuring the Aston Martin Vantage GT4 that can be seen at the TRG-AMR North America booth at the New York International Auto Show this week.

Golde on being named Race Director:

"When Kevin Buckler and Kenneth Greenberg approached me about this brand new venture, my mind went back to the 'Panoz days' and that One-Make series. It was the most rewarding job I'd ever had. I worked hard but the contacts and friends that I made while running that group plus keeping my hands in the business since then seemed to have certainly paid off with this new opportunity. I'm very pleased to be joining TRG-AMR as the director of this new series. Buy an Aston Martin so you can join in the FUN!"

Golde on what she’ll bring to the one-make series:

"The people that know me in 'the business' appreciate that I'm both tough AND fair. I can prioritize and shift focus easily from one effort to the next. That's actually where I'm at my best."

Kevin Buckler on the appointing of LisaKay Golde for the Series:

"We are so very fortunate to have someone with LisaKay's background, knowledge and experience with running a One-Make series, join our organization. The GT4 Challenge of North America is a huge priority for us, particularly as more and more drivers step forward and purchase the amazing Vantage GT4. It is the perfect car. She is the perfect choice. She's done this successfully before. She knows the key players and she has their respect. We all have a terrific opportunity in front of us and the response we have seen regarding the popularity of the upcoming One-Make series is beyond anything that we expected."

Aston Martin Racing continues its tradition with the advent of TRG-AMR North America, proudly taking the reins of its North American motorsport operation. The Racer's Group (TRG), with headquarters in Petaluma, California, was founded in 1993 and has competed at the top level of motor racing for nearly 20 years. The team has competed in all of the major series and holds victories in the ALMS GT Class, the Rolex Series DP Class, the Rolex Series GT Class, the ALMS GTC Class as well as the Grand American GS Class. The team won Rolex Series GT championships in 2005 and 2006 and holds the record for the most wins in GRAND-AM with 32.