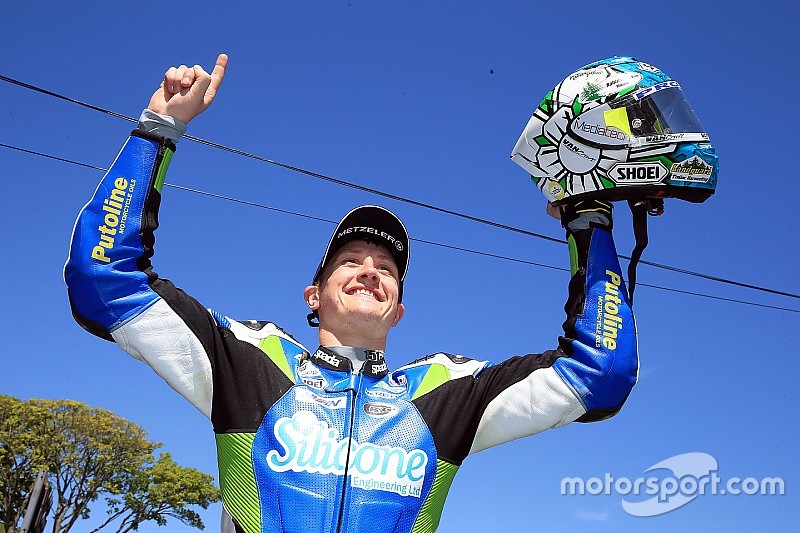 Dean Harrison dominated the 2019 Southern 100 with six victories, including the Solo Championship race, while Michael Dunlop endured a difficult return.

This year's Isle of Man Senior TT winner Harrison notched up his 24th victory after winning all six races he entered at the Billown circuit, with a dominant display in the final contest netting him his third-successive S100 Championship title.

Racing began on Wednesday evening with Harrison guiding his Silicone Engineering Kawasaki to victory in the opening Superbike race by 11 seconds over Tyco BMW's Dunlop, returning to the event after a year out. Harrison doubled up on Wednesday with a win in the first Supersport race of the meeting, though he had to fight for this one.

Prez Racing's Jamie Coward, who was third in the earlier SBK race, led for the first four laps aboard his Yamaha R6, though was eventually overhauled by Harrison at Iron Gate on lap five. Coward kept him in his sights, but was pipped to the chequered flag by 0.416s, while Michael Evans completed the podium after Dunlop's MD Racing Honda broke down early on.

In the following 650/250 race, Coward was set to make amends aboard his KTS Suertwin machine. But a heavy crash at Church Bends denied him, with Dominic Herbertson moving through to take his first S100 win aboard the injured Paul Jordan's Devitt Racing bike.

Herbertson doubled up in the class on Thursday, cruising to victory by 19s, while Coward was a non-starter due to his bike sustaining too much damage in his spill the previous night. Harrison's stranglehold on the '19 S100 continued on Thursday in the SSP race, as he once again out-duelled Coward to seal victory by the slender margin of 0.268s.

Dunlop was a non-starter, with a crash at Castletown Bridge on lap two of the following SBK race forcing the 19-time TT winner to sit out the remainder of the day's action due having suffered a broken pelvis. This is the latest in a run of injuries Dunlop has suffered this year, after he hurt his wrist in a testing crash prior to May’s North West 200, and was reported to have sustained “serious injuries” in a smash while competing in last month’s Donegal Rally.

Before his crash, Dunlop gave chase to Harrison early in that race, with his crash releasing the Silicone Engineering rider into a dominant lead he would not relinquish to win for the fourth time in the meeting ahead of maiden podium finisher Sam West and Coward.

Once again beating Coward in the final 600cc race, Harrison headed into the final solo race of the meeting favourite. He delivered on expectation, immediately building up an advantage of over 10s by lap three, and eased to his third-straight S100 Championship victory to ahead of Ryan Kneen (Charmers Builders BMW) and JGH Racing's Rob Hodson.

Wednesday's racing was cut short by an accident in the first Sidecar race involving two outfits, with four spectators injured. One had to be airlifted to Nobles Hospital on the Isle of Man, but no-one involved is reported to have suffered life-threatening injuries.

The race was re-run on Thursday morning, with Tim Reeves and passenger Mark Wilkes (Team Berlin Express) pipping the Cloud Vapers outfit of Alan Founds/Jake Lowther. In the Championship race, Reeves and Wilkes's hopes of a second victory were dashed by a jump start.

Though dropping to the back immediately, they were still hit with a 10s time penalty. A mechanical issue late on would force them out.

John Holden and Lee Cain (Barnes Racing) and the Rowtec Engineering outfit of race one podium finishers Peter Founds/Jevon Walmsley battled hard in the closing laps, with the latter prevailing by 0.131s for their first win.

Michael Dunlop “back on my feet” after breaking pelvis in crash