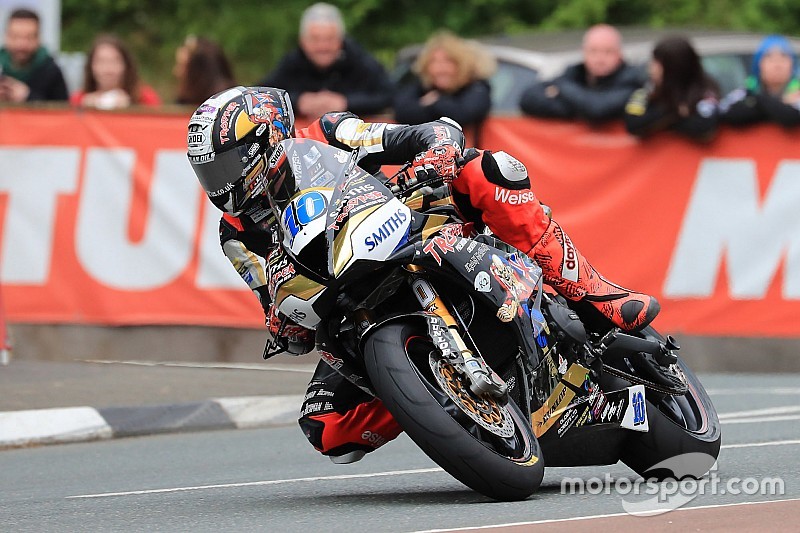 A packed five-race Thursday schedule due to weather cancellations on Tuesday and Wednesday meant the second SSP encounter was shortened from four laps to two, with Hickman and Harrison dicing for the lead across both tours.

Hillier led initially into Glen Helen on the Bournemouth Kawasaki, but was overhauled by Hickman by 0.061s. Harrison, who was fourth in the first SSP race, took over the lead by half a second from Hillier at Ballaugh Bridge, with Hickman dropping to third.

The Smiths Racing rider guided his Triumph to a 0.038s lead at Ramsey, which he extended to 2.3s across the mountain section and back to the Grandstand start/finish area.

Harrison dug deep on the run to Glen Helen on the second lap on his Silicone Engineering Kawasaki, but was cast three tenths adrift of Hickman at Ballaugh.

That gap remained stagnant on the run to Ramsey, but Hickman opened this up to close to a second over the mountain, and emerged onto the start/finish straight with a 3.3s lead to secure his fourth TT win and his first in the SSP class.

Harrison remained second, with Hillier adding to his second-place in the first SSP race with a third-place finish.

Conor Cummins was a very early factor in the podium battle, but faded on his Padgetts Honda and was 8.5s away from the rostrum in fourth ahead of Devitt Racing's Jamie Coward.

Gary Johnson was the only official Honda-entered CBR600 across the like in 10th, after teammate Ian Hutchinson pulled out at Quarterbridge on the opening lap.

John McGuinness made a marginal improvement on his performance in the first SSP event, guiding his Padgetts Honda to 15th.