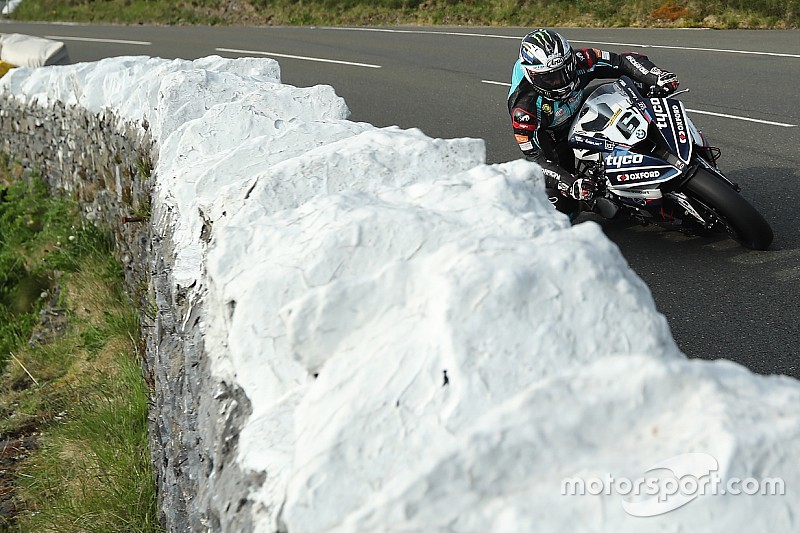 Michael Dunlop topped a fragmented final Superbike practice for the 2018 Isle of Man TT ahead of Tuesday pacesetter Dean Harrison.

Due to get underway at 1820, the combined Superbike/Superstock/Supersport session was delayed until 1855 due to part of the course needing to be cleaned following an earlier road traffic accident, with a drone illegally flying over Bray Hill also adding to the delay.

Laptimes were someway off of the best from Tuesday's running, as the riders were cautioned to take it easy over the mountain due to a lack of adhesion from the earlier clean-up operation.

Tyco BMW's Michael Dunlop set the initial Superbike with a lap of 17m06.429s at 132.331mph, with Harrison six seconds adrift on the timesheets in second on his Silicon Engineering Kawasaki.

Peter Hickman focused exclusively on his Superstock Smiths BMW on Friday, as he was happy with the work he did on his Superbike on Thursday, while his Trooper Beer Triumph Supersport bike developed a technical issue.

The session was brought to another brief halt at 1915 due to an incident at Hailwood Heights. The rider involved was reported as uninjured, but a substantial amount of oil had been dumped on the road.

Once back underway, Dunlop improved on his earlier standing start lap with a 132.659mph in 17m03.888s, and carried on for his first flying lap of the week.

JG Speedfit Kawasaki's James Hillier completed the top three by virtue of his second flying lap, with Johnson and Padgetts' Conor Cummins on his Honda Fireblade rounding out the top five.

Hickman only planned on doing two laps on his Superstock machine on Friday night, and cemented top spot in the class on his final attempt with a 130.829mph tour in 17m18.212s.

McAdoo Racing's James Cowton was the top runner in the Supersport class on his ZX-6R with a lap of 123.378mph in 18m20.911s. Gary Johnson and Adam McLean shadowed him on the timesheets.

John Holden and passenger Lee Cain topped the Sidecars timesheets with their one and only lap on Friday night of 19m33.790s at 115.717mph on their Honda-powered Silicone Engineering outfit.

Alan Founds and Jake Lowther were second quickest with a lap of 19m56.123s, while Founds' brother Peter and his passenger Jevan Walmsley completed the top three.

Thursday's fastest duo Ben and Tom Birchall did start the session, but never intended to complete a full lap and pulled out at Ballacraine having run through some changes to their EG Racing Honda machine.

Once again in practice for the Zero TT machines, it was a Mugen that led the way, though this time it belonged to Lee Johnston as teammate Michael Rutter pulled out at the 13th Milestone having been fastest up to that point.