Back to the future: Newgarden wins in Formula F 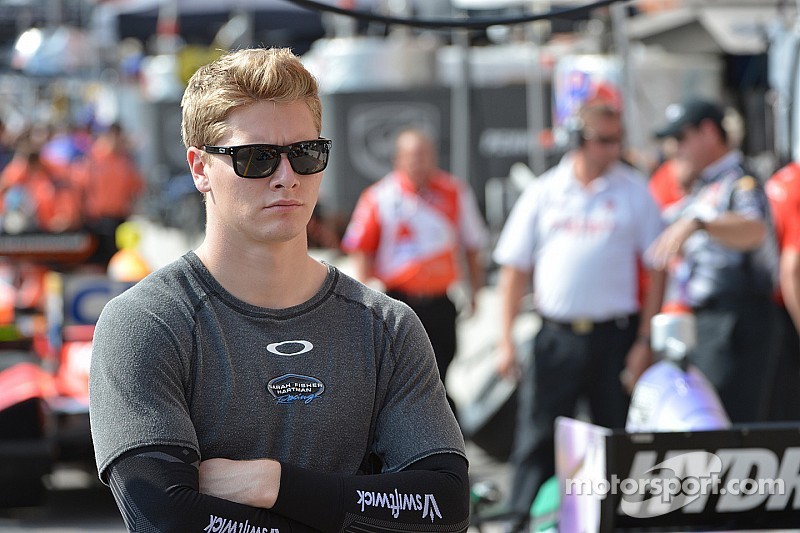 Sunday morning provided Newgarden, the only American to ever win the prestigious Formula Ford Festival in England, an opportunity to run a few laps in the car. He became the first driver all weekend to run a sub 1:33 lap, serving notice that, despite starting 11th and last on the grid, the IndyCar ace would be a force with which to be reckoned.

Polesitter and three-time SCCA Runoffs Formula F Champion Tim Kautz got the jump on field to lead early in his No. 88 Braeburn/Two Dogg/Hoosier/Euroquipe Piper DF-5/Honda. Kautz and Mallinen’s No. 1 Spectrum 014H/Honda were never more than one second apart in the opening stages of the 21-lap, 49.98-mile race, but Newgarden was on the charge.

“This is the most fun I’ve had this racing season,” Newgarden said. “You just can’t race any better than this. You can drive the car sideways. You can go three-wide into the brake zones. You can race the guys for two- to three-corners at a time. It’s just the most fun you can have in an open-wheel car.

“Tim [Kautz] and Max [Mallinen] were really good—they drove really clean. I ran them really hard. I had to. They were strong at latching on, and it was hard to get rid of them once I was up there. I knew if I could break away, we’d be in good shape, but I just couldn’t. They kept battling. Really clean, good drivers. It was fun to mix it up with them.”

As Newgarden was beginning to pull out a gap, Kautz had an issue and ran off on lap 15, leaving Mallinen, of Liberty Lake, Washington, by himself and leaving Johnson, of Stilwell, Kansas, solidly in third.

“Today was really cool,” high school junior Mallinen said. “We were all fighting really hard, but still respecting each other. There were a lot of opportunities to catch wheels, but I’m glad that everyone was able to keep it clean. At one point, the three of us went three-wide into the chicane. That was exhilarating!”

Formula F veteran Johnson stayed close, but was just off the battle for the lead.

“When I was running fourth, I could see that they had just a little more talent than I have,” Johnson surmised. “I just tried to keep up with them, but they’d pull me by little bits here and there. I’m okay with finishing third today. This is a tough crowd!” Bob Perona, of Indianapolis, Indiana, drove his Piper DF-3 to a fourth-place finish, followed by Kautz.

Newgarden set a new track record for Formula F at 1:32.440 (92.687 mph). After the race, he noted the class’s importance in the motorsports development ladder.

“Formula F is one of those training grounds that should never go away,” he said. “I think it is the best open wheel training ground for a young driver. If you want to get the best experience and training, Formula F is the place to go. Honda is obviously very involved in this and for them to invite me down here to do this, I can’t thank them enough. They’re always so good to me. I hope that I can do this some more.”

W. Clint McMahan, of Covington, Georgia, dominated Formula 500, beating Thomas Edwards in his Nova KBS/Honda Formula 600. Chris Forrer, of Pensacola, Florida, doubled up on the weekend in Club Formula Ford, winning in his Scurvydog Motorsports Tiga/Ford. In the opening race of the day, Kevin Ferah, of Montreal, won in Spec:RaceAtom, driving his Ariel Atom.

SCCA Majors season just one race from finish in Topeka