This event marked the first national-level SCCA race at the four-year-old facility.

This event marked the first national-level SCCA race at the four-year-old facility. Drivers, Majors staff and members of the host Arizona region were all extremely excited to see what the circuit and facilities, in general, had to offer. 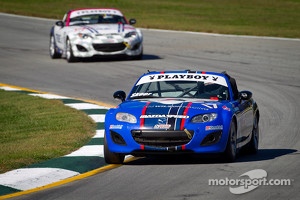 During the Friday test day, a problem with an intermittent timing loop at the 2.22-mile, 18-turn circuit was discovered. The track staff and SCCA officials worked tirelessly to remedy the problem, fixing the issue midway through Saturday morning’s six qualifying groups. After a repair to the timing wire, itself, and replacing the transmission wire, the system worked well for the rest of the day.

Following the yeomen’s work performed on the timing system, it was time to settle the races on the track. Six groups of 30-minute races were to set to battle it out.

Spec Miata proved to be the closest race all day. Clement Lee, of San Diego, Calif., kept his win streak in Western Conference competition alive, taking home his third win of 2014. He edged out fellow Californian Elliott Skeer to the line by 0.007-second.

Skeer, 2013 SCCA Pro Racing Mazda MX-5 Cup Championship runner-up, led the class to the green. Driving the No. 77 Rush Motorsports Mazda Miata, Skeer held onto the lead until Lee, in the No. 28 RM Autosports Mazda Miata, got around him in the final complex of corners on lap seven. Skeer spent the remainder of the race just off the rear bumper of Lee, but was unable to make a pass.

As the leaders approached the finish line nose-to-tail for the checkered flag, with Lee in the lead, lapped traffic forced both the leader and Skeer to slow and take evasive action. Lee chose to dive to his right which allowed him preserve his momentum, while Skeer went left. The momentary decision proved to be the decisive factor in Lee’s race win.

Group Two was Spec Racer Ford, but the much anticipated battle was shortened by an early checkered flag. John Tipton, of Lake Oswego, Ore., (No. 23 Pro Drive Racing/Flatout SRF) was the Round Three winner following a full-course caution brought out when the No. 4 SRF of Steven Pulliam, of Portland, Ore., made contact with the concrete barrier outside of Turn Two. Pulliam’s collision came on lap one, as he tried to avoid a spinning car.

At the scene, emergency personnel determined that Pulliam had sustained injuries to one ankle and his collar bone. Pulliam was transported to the University of Arizona Medical Center as a precautionary measure.

The high-downforce, high-speed formula cars and prototypes were the feature in group four. Jose Gerardo, of El Paso, Texas, took the overall group win, driving away from the remaining 18 cars in the class. Behind the wheel of his No. 14 General Labels and Printing, LLC Stohr F1000, Gerardo finished with a 53.112-second lead over the field.

In Formula Mazda, Doug Nelson, of Tucson, Ariz., took advantage of the top three drivers in Western Conference standings not being present at this weekend’s race. After taking the win, it should boost his rank in the points. Howerver, Nelson (No. 07 Raptor Motorsports/Hawk Performance Formula Mazda) also has to perform well during Sunday’s race to make the most of the opportunity.

In Prototype 2, David Ferguson, of Paso Robles, Calif., continued his assault on the Conference Championship. Behind the wheel of his No. 75 Veracity Racing Data/Hoosier Stohr WF-1/Suzuki, this was his third conference win, in as many races.

The production classes made up group five. Paul Whiting, of Pahrump, Nev., drove his STL-class No. 151 Next Victory/Hawk/Hoosier/Honda Performance Development Honda CRX to a class and group victory. Like many earlier winners Whiting was able to jump to an early lead and drive away while the drivers behind him fought for position.

Eight-time National Champion Joe Huffaker, of Petaluma, Calif., brought out his F Production-classed No. 77 Huffaker Engineering MG Midget. Huffaker showed why his is an eight-time Runoffs Gold Medal-winner by driving to an uncontested class victory.

Lee Niffenegger, of Santa Clarita, Calif., was the third driver at this weekend’s event that has kept his win streak intact, so far. With one more day of competition, Niffenegger will need to have another strong run in his STL No. 42 Honda Racing/HPD/BFGoodrich Tires Honda Civic Si come Sunday.

Defending Western Conference GT-1 Champion Michael Lewis, of Poway, Calif., drove the No. 12 Goodyear/Cyclo/Redline Oil Jaguar XKR to an overall victory in group six. However, some of the best racing was behind him battling for the GT-2 win.

Michael Von Quilich, of Pahrump, Nev., and Spencer Trenery spent 16 laps in a close-quarter fight for the win, which eventually went to Von Quilich. Trenery was directly in the tire tracks of Von Quilich looking to pounce on any mistake made by the driver of the No. 19 Apartments247.com/RVParks247.com/Storagerentals247.com SRT Viper ACRX. Lapped traffic ended up being the only thing that would allow Von Quilich to create some breathing room, allowing him to cruise to victory.

Each of the six race groups hosting the 26 Runoffs-eligible classes return to the track for Sunday’s races, beginning at 9:00 a.m. (MST). Sunday’s races are 25 laps or 40 minutes, whichever comes first, followed by victory laps and podium ceremonies.

O’Connell doubles up at Sonoma