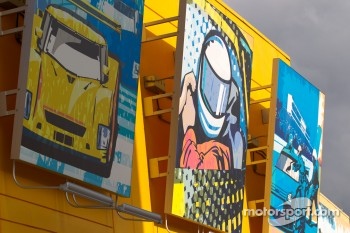 Timing/Scoring: Live Timing & Scoring and lap notes via the SCCA Pit Board are available for all sessions through www.mx-5cup.com

Track Records: This is the first visit of the Playboy Mazda MX-5 Cup to Homestead-Miami Speedway.

The SCCA Pro Racing Playboy Mazda MX-5 Cup begins its sixth season with a mix of familiar and new faces to the series, each trying to make their mark on a wide-open championship.

The returning team with the most familiar faces in the paddock is ALARA Racing. Led by owner/driver Ara Malkhassian, the Series' all-time leader in starts, fastest race laps, and top-five and top-ten finishes, returns in the ALARA Racing/ALARA Garage MX-5 after a seventh-place finish in last year's Championship.

Expecting to join Malkhassian on the grid are two drivers who have spent time in an ALARA racecar during the past two seasons each, Tim Probert and Harrison Williams. Joining the trio this year is Jeff Mosing, who earned a career best runner-up finish last year at Miller Motorsports Park and could challenge for podium finishes all season long in his ALARA Racing/Frank's International MX-5.

Across the paddock returns a familiar team with new drivers. Atlanta Motorsports Group has captured the MX-5 Cup Drivers' Championship the past two seasons, first with Todd Lamb and last year with Brad Rampelberg. This year, the team has plucked Justin Hall to carry on the tradition in the No. 4 Mazda MX-5. Hall was the 2005 Pacific Tour Champion in the Mazda Miata Cup, a precursor to the current series, and a five-time winner in that series.

He'll be joined at AMG by this year's MAZDASPEED Ladder Shootout winner, Scott Shelton. Each year, Mazda selects champion amateur racers to participate in their year-end "shootout," with the winner receiving a ride in the Playboy Mazda MX-5 Cup. Shelton follows previous winners Rampelberg, Justin Piscitell, and Nick Evans, all of whom are race winners in the series. Shelton will drive the No. 3 MAZDASPEED/Mothers/iRacing/PurePower/BFG Mazda MX-5.

Returning to AMG this year is Michael Cooper. As a rookie, Cooper chased the championship until the final events, winning once at New Jersey Motorsports Park and surprising people with strong runs along the way. This season, he'll drive the No. 6 VEND3.com MX-5 for AMG racing. Scott Dollahite also joins the AMG stable for this season.

Making a big splash in his move back behind the wheel in the series is 2007 MX-5 Cup Champion Jason Saini. Saini will drive the No. 28 Autobarn Mazda of Countryside/New Balance/Phiten/SunTrust/CJ Wilson's Children's Charities MX-5 for the newly formed C.J. Wilson Racing. The joint project between Saini and Wilson, the Texas Rangers pitcher, will make its debut at Homestead-Miami Speedway.

Joining Saini at C.J. Wilson Motorsports at Homestead is young racer Spencer Pigot. Pigot is a MAZDASPEED ladder series driver, capturing the 2010 championship in the open-wheel Skip Barber National Series and the Team USA scholarship, and plans to contest the full season in the USF2000 Series in 2011.

Three single car teams are also participating in the opening round. Dean Copeland, who was involved in one of the most thrilling races of last season before falling to Rampelberg by just 0.024-second at VIRginia International Raceway to Brad Rampelberg, returns in the No. 7 Copeland Motorsports/Sync Speed MX-5.

Beth Chryst makes her MX-5 Cup debut in the No. 2 Chryst Brothers Construction MX-5. Kevin Kopp will do the same in the No. 22 Piper Motorsport/Brimtek Motorsports MX-5 at Homestead.

The beauty of running a spec-series is that driver talent really has a chance to shine through. In MX-5 Cup, however, the additional alluring aspect is the car; the nimble, dependable and undeniably fun Mazda MX-5.

Mechanically, all MX-5 Cup cars will remain essentially stock, as delivered from the dealer, with only bolt-on modifications to the intake and exhaust systems. While the stock MX-5 Miata produces 170 hp, an MX-5 Cup car will produce in excess of 200 hp. All MX-5 Cup vehicles will be equipped with a six-speed manual transmission and may be run with the optionally available limited-slip rear differential.

Suspension will incorporate a fully-adjustable coil-over kit with double-adjustable shock absorbers and specified spring rates, as well as adjustable anti-roll bars front and rear. All cars will run a 17x8" wheel of a specified weight -- again, to level the field and minimize costs, as well as the spec BFGoodrich g-Force R1 Tire. Additionally, brake pads, fluid and lines will be upgraded to racing components.

All MX-5 Cup cars will run with full safety equipment, including an eight-point roll-cage welded into the car, a racing seat, racing seatbelts and will incorporate a fire-extinguishing system.

As always, all components for the cars will be sold directly through MAZDASPEED Motorsports Development, which also supports the program monetarily with contingency awards to successful drivers.