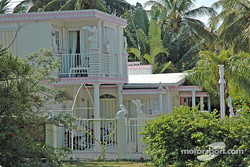 Mosing established a new qualifying lap record with a 1:36.110 (86.151 mph) early in the 30-minute qualifying session. As a result, he will start from the pole in the No. 10 ALARA Racing/RaceNowForAutism/Frank’s International MX-5 Cup.

“It’s real important not to do anything bad for the first few laps,” Mosing said of his qualifying effort. “I went against that. [During the] second lap, I dropped a couple of wheels. Tried to gather myself back together for the third lap and then ran the 36.11.

“Honestly, I’m in shock right now. I’ve been working in the Playboy Mazda MX-5 series for three years now and I’ve always done well. I try to finish in the top-10. [But] would never expect to do this well. I wanted to give ALARA Racing their first pole of the year. I am really honored to be able to do that.”

This is the first time the Playboy Mazda MX-5 series has competed at Homestead. As a result, all of the times and speeds set this weekend will be new records.

Cooper will start on the outside of the front row in the No. 6 AMG Racing/VEND3.com MX-5 Cup. He turned his fastest time on his eighth circuit around the 11-turn, 2.3 mile course with a 1:36.266 (86.011 mph). Cooper was an MX-5 Cup rookie last season and recorded a win at New Jersey Motorsports Park. He finished 2010 with a win, four podiums and eight top-five finishes.

Ara Malkhassian, of Houston, will roll off the grid third in the No. 11 ALARA Racing MX-5 Cup. He turned his best time early in the session with a 1:36.674 (85.648 mph). Malkhassian looks to record his second-career win this weekend.

Spencer Pigot, of Orlando, Fla., turned the fourth fastest qualifying lap (1:36.710, 85.616 mph) in the No. 27 C.J. Wilson Racing/MAZDASPEED Motorsports MX-5 Cup. This car is part of C.J. Wilson racing stable that is owned by Major League Baseball player C.J. Wilson. Wilson is currently at spring training with the Texas Rangers.

Dean Copeland, of Bowie, Md., will start fifth in the No. 7 Copeland Motorsports/Synch Speed MX-5 Cup. His best time was a 1:36.718 (85.609 mph). Copeland was the fastest in today’s combined practice sessions. He was an MX-5 Cup rookie last season and recorded a win at New Jersey Motorsports Park. He finished 2010 with a win, four podiums and eight top-five finishes.

Results are available at www.mx-5cup.com