With the sun shining and the track dry this afternoon at the 2003 Valvoline Runoffs, another group of SCCA Club Racers lined up for their chances for a National Championship. After a steady rain all night and into the morning warm-ups and even race ...

With the sun shining and the track dry this afternoon at the 2003 Valvoline Runoffs, another group of SCCA Club Racers lined up for their chances for a National Championship. After a steady rain all night and into the morning warm-ups and even race one of the day, the beautiful weather was a welcome break.

The first race after lunch, race 4 of the weekend, was for the Formula Atlantics, SCCA Club Racing's fastest category. Rennie Clayton took the early lead from the outside of the front row in his rebuilt Ralt and the second row starters Ben Beasley and Daniel Selsnick followed him through ahead of polesitter Keith Lively. 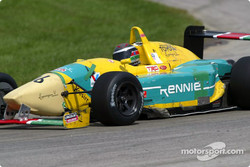 Rennie Clayton.
Photo by Bob Meyer.
Clayton's car looked a bit ragged, as his crew had to patch it together after a hard crash earlier in the week, but it was fast. He pulled ahead to a healthy lead in the early laps while Beasley and Selsnick fought over second place.

By lap 6, Lively had gotten his car up to speed and passed Selsnick for third place and started trying to pass Beasley for second. Beasley proved harder to get around and it took Lively several laps to get the pass made, but it was a dramatic outside pass in the Keyhole that got it done.

By lap 13 (of 20), Clayton's car was starting to come apart. In particular, the car's rear wing was starting to collapse. It was tilted and wobbling and looked like it might not stay attached for the rest of the race. More importantly, Lively was making progress on Clayton's lead. On lap 18, however, with Clayton in reach, Lively spun down the hill in Thunder Valley and backed into the tire wall and out of the race.

Clayton's wing stayed attached and he won the National Championship for Formula Atlantic.

Race 5 was for the modified stock cars of Touring 2. Fred Baker's Porsche Boxter took the lead from the pole into the Esses, but carried too much speed into the third turn of the complex and had to brake hard. Stan Wilson was following closely and punted Baker into the gravel trap. Baker was able to continue, but was at the tail of the field.

Jordan Sandridge took the lead in his Pontiac Firebird with his father (Mark) following closely in a matching red and white car. Phil Croyle was third with Wilson holding 4th, both running Chevrolet Camaros. The Sandridge cars pulled ahead a bit and TC Kline tagged along behind the Camaros in his Nissan 350Z.

Behind the five leaders, a massive crash happened in the Esses on lap 2. Ten cars were involved, and five of them were eliminated from the race.

On lap 6, Jordan Sandridge's great race went away when he spun off the track in the Carousel turn. He got going, but could not complete another lap, retiring with clutch trouble. 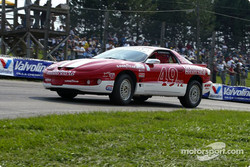 Mark Sandridge.
Photo by Bob Meyer.
Mark Sandridge held the lead; with Wilson following closely in second, Croyle in third, Kline fourth and William Moore joining the front pack in fifth. On lap 10, Kline got around Croyle for the final podium place, but otherwise, the race finished just that way.

"I had to pick up the pace," commented Mark Sandridge. "Stan (Wilson) was pressuring me and fortunately I was able to hold him off. It seemed like the race took forever to end. It went lap after lap. I kept asking 'How many more, how many more.' It was mentally the hardest thing I've ever done."

The highly modified small sedans of GT4 were next up. Keith Grant had the field covered with his Nissan 200SX, leading from pole to checkered flag for his second National Championship in the class. He last won way back in 1990. Warren Montague (the 1996 GT4 champion, in a Toyota Tercel) and Michael Maziotti (Honda CRX) briefly squared off for second place, but after a bit of side-to-side contact between the two, they ran the rest of the race in that order. 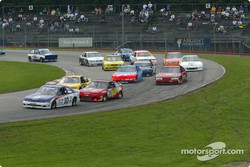 Start: Keith Grant leads the field.
Photo by Bob Meyer.
Behind the top three, few of the rest of the contenders could keep their cars running and on the track. Hubert Deprez (GT4 winner in '91 and '93) was as high as fourth, but his engine soured and he faded back to 11th place before retiring at mid-race. Jamie Houseman (GT4 winner in '01 and GT5 champion in '96 and '97) held fourth for a few laps too, but his car quit soon after Duprez'. Finally, Keith Gillespie got into fourth place and kept his car running to the end.

For race seven, the identical rotary-powered Formula Mazda class got the green flag. Doug Peterson led from the pole, but he had to work to keep it. Second placed James Goughary Jr. had his brightly painted hot pink and yellow car tucked right under the rear wing of Peterson's paler yellow car. And kept it there. For lap after lap! Unfortunately, Goughary spun off into the gravel on the approach to the Carousel turn on the 14th lap and his race was done.

Chris Schanzle had an uneventful run to finish second. Robert Kaminsky took the final podium spot on the strength of a great start that saw him jump from 8th to 5th in the first series of turns. He got by Kyle Kelly on lap seven and held off a determined charge by Fabio Castellani for most of the race.

Editor's Note:
The Formula Mazda race results have been revised showing the winner, Peterson (No. 87) and the fourth-place finisher, Fabio Castellani (No. 77) as being disqualified per the Chief Steward. If the DSQ is upheld, Schanzle will be the National Champion, followed by Robert Kaminsky in second and Keith Roberts will jump up two positions to the final podium step.

The real excitement was yet to come. For the eighth and final race of the day, the GT2 cars were back for what is often one of the best races of the week. This year's race could have been the best ever!

The GT2 class has had a stable group of competitors in the front pack for many, many years. Duane Davis (13 National Championships) and Bill Reid in Toyotas, James Goughary Sr. (1998 GT2 champion), who races Nissan ZXs, David Finch (5 time GT2 winner) with his impeccable Porsche 944, and Tom Patton (GT2 champion in 1999) in a Sunbeam Tiger, have come to the Runoffs with their fast tube-framed machines to fight over this crown annually for a decade and a half!

The excitement started early. Finch had the pole this time, but Davis and Goughary got a good jump at the wave of the green flag. Davis nosed ahead for the lead, while Goughary and Finch slammed together as they went over the hump of Madness, the middle turn of the Esses. Finch's car suffered damage to the front suspension and he was out of the race on the spot, but Goughary continued. Behind them, Patton spun while braking to miss the crash and he was last on the track by the time he got turned around.

When the dust settled, Davis had the lead, Reid was second, Gerald Mason (in a Nissan 300ZX) was third and Goughary fourth. When Mason's engine quit at the end of lap 4, a great battle was set up for the remaining top 3 runners.

On lap 12, Reid passed Davis for the lead with a stunning outbraking move at the end of the back straight. A lap later, Goughary used his car's horsepower advantage to move Davis to third in fast turn 1. Three laps after that, Goughary used the same move to take the lead from Reid. Despite flapping bodywork and a damaged wheel from his first lap crash with Finch, Goughary looked to have the race in hand at this point. But the real excitement hadn't even started!

On the penultimate lap, Reid used his car's superior braking to take the lead back from Goughary at the end of the back straight. On the final lap, Davis went back to 2nd place at Goughary's expense with an outside pass in Madness! Race over, you think? Not a chance.

In the Carousel, the race's final turn, Reid ran a little wide and Davis tried to duck inside for the lead. Reid slammed the door and both cars slid into the grass, locked together. Goughary, thanking his luck, drove past them for the win. The two Toyota drivers spent well over 30 seconds trying to get their cars separated and finally limped them across the finish line to finish second (Davis) and third (Reid), just barely filling the podium ahead of - Patton! After his first lap spin, Patton had gotten past everyone but the top three and nearly snagged second place despite starting the last lap 45 seconds behind the three leaders.

With that, day one was complete at the 2003 Valvoline Runoffs. What kind of excitement is ahead in the next 16 races over the next two days? Stay tuned!