Steve Sargis won his fourth SCCA National Championship gold medal today, but his first in F Production. He put a bigger engine in his familiar red Triumph Spitfire this year and moved up from G Production, where he has been a fixture at the front ...

Steve Sargis won his fourth SCCA National Championship gold medal today, but his first in F Production. He put a bigger engine in his familiar red Triumph Spitfire this year and moved up from G Production, where he has been a fixture at the front of the pack for years. He left no doubt that he will be a similar force in FP with the pole position and a flag-to-flag win.

Michael Pinney, back in national racing after a hiatus of over twenty years, was trying for his second National Championship. He too got his previous medal in GP, but is now using the FP Midget that Joe Huffaker has been dominating the class with in recent years. Pinney started behind Sargis, and fell to third on the start behind Dick Davis. 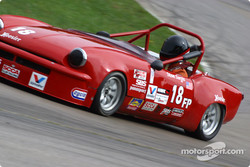 Sargis pulled away from Davis and Pinney, but a crash on the start put David Kicak's MG into the wall and a long caution period was needed to pull him out. Pinney got past Davis on the restart and started applying pressure to Sargis. After Sargis got his tires up to temperature again, he was able to pull steadily away to a dominating win.

Behind the leaders, though, an exciting race broke out. Charles Guest, in another Huffaker-prepared MG Midget, had an incident filled race. The excitement started at the entrance to the esses on the second lap. Dieter Griesinger tapped Guest under braking at the end of the back straight, causing a wobble that he used to set up a pass attempt. The pass wasn't clean and Griesinger then drilled Guest's car hard in the side at the apex of the turn - so hard that Griesinger's car drove over the top of Guest's fender. Both continued at speed with no major damage apparent.

After the field bunched up for the early caution flag, Guest's odyssey continued. He overshot the Carousel and drove off in the grass, losing several positions. This put him into a fight for 5th position with the Fiat X1/9s of Daniel Snow and Mark Irwin and the Midget of Jamie Blust. Ahead of this group, Davis and Griesinger were sparring over the third spot. 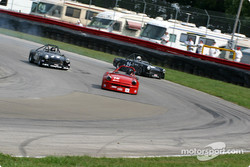 On lap 9, Snow hit Guest with a body block at the exit of the Carousel as Guest went past into sixth place, then Irwin tried to force Guest into the grass on the pit straight as Guest went for another position. Later in the lap, Irwin and Blust made contact that took Blust out of the race and Irwin out of contention.

In the next segment of the race, Griesinger, Davis, Snow and Guest were trading places for the third position and back. On lap 11, Snow passed Davis in the back straight braking zone. One lap later, Snow passed Griesinger and Guest passed Davis in the same place. On the next time through the esses, Griesinger took third back from Snow and Guest slipped by Snow as well on the next turn. Snow, whose car had been getting looser and looser, finally spun in turn 1 at the start of the 14th lap, and he pulled into the pits and parked it at the end of the next lap. 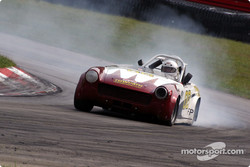 The final pass in this intense battle brought it all back around to the first incident between Guest and Griesinger. This time, Guest made a clean pass going into the esses, and Griesinger tried to stay on the outside of Guest. Guest, not willing to leave any extra room after his harsh treatment by Griesinger lap 2, took the hit on the other side this time and Griesinger spun into the grass. He continued, but retired to the pits before the end of the race.

With everyone watching these exciting battles, Sargis strolled off to an easy win and Pinney had an uncontested run to second place. Guest finished third, an amazing result after a hair-raising race.