Richard Spicer won his second consecutive SCCA National Championship in the Spec Racer Ford class after a race-long battle with Mike Davis. Many of the previous races at this year's Valvoline RunoffsÂ® have featured good competition behind ...

Richard Spicer won his second consecutive SCCA National Championship in the Spec Racer Ford class after a race-long battle with Mike Davis. Many of the previous races at this year's Valvoline Runoffs® have featured good competition behind the leaders but most of the winners have had smooth, unimpeded runs. It was good to see an exciting race for the lead. 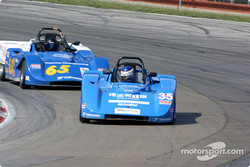 In the very equal Spec Racer cars, the start is crucial, so the cars spread out to four and five wide on the straight leading to Mid-Ohio's esses after they got the green flag on the back straight. Amazingly, there were no big collisions and the field fell into line behind the polesitter, Spicer. Davis got a good start and dropped in behind Spicer, getting around the third and fourth qualifiers, John Black and Lee Fleming. Behind them, Fleming got third ahead of Black, with Paul Marino taking fifth by going around Greg Reinacker. Jeff Beck was seventh, making a good start from ninth place.

On the second trip through the esses, Davis used the braking area to take the lead from Spicer, and behind them Black passed Fleming for third. Beck used a good launch from the Keyhole to pass both Marino and Reinacker.

In the early laps, Cliff White was making the most progress through the field. He started 10 and fell to 13th at the green flag. White was making most of the passes in the race, getting up to eighth place by the 7th lap. Unfortunately, he was one of the first to drop out when his car slowed on track on the next lap. 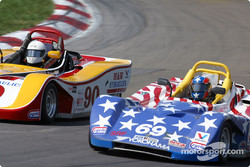 In the middle section of the race, the top part of the field had broken away into several good races. Spicer and Davis continued their duel at the front; Fleming held a very small advantage on Black for 3rd. Beck was having a lonely race in fifth and Reinacker, Marino, and Johnny Meriggi were following Beck, all spaced one second apart from one another.

A fun-looking race was developing for 9th through 13th places, with Jim Marinangel leading Nathan Offutt, Bill Jucha, Scott Goolsby and Kyle Kelley. Goolsby seemed to have the best car of the group and worked his way through this group over the course of the last 9 laps. This entire group caught up to Reinacker while they battled, and soon they were all going for seventh place when Marino spun and rejoined behind them.

Up front, the race lead was in constant turmoil. On lap 11, Spicer outbraked Davis at the end of the backstraight to go out front again. Davis stayed right being Spicer, though, seemingly stuck to his tail. On lap 14, Davis tried to pass under braking for the esses, but didn't have enough draft to pull it off. A lap later, the same move got him the lead. 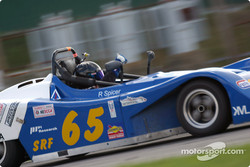 In the same braking area on the 18th lap, Spicer took the point again, but couldn't hold it, letting Davis in front two turns later. Finally, on the last lap, Spicer made the same move again, but kept Davis behind to get the repeat win. Behind them Black put the same move on Fleming to reach the last step on the podium.