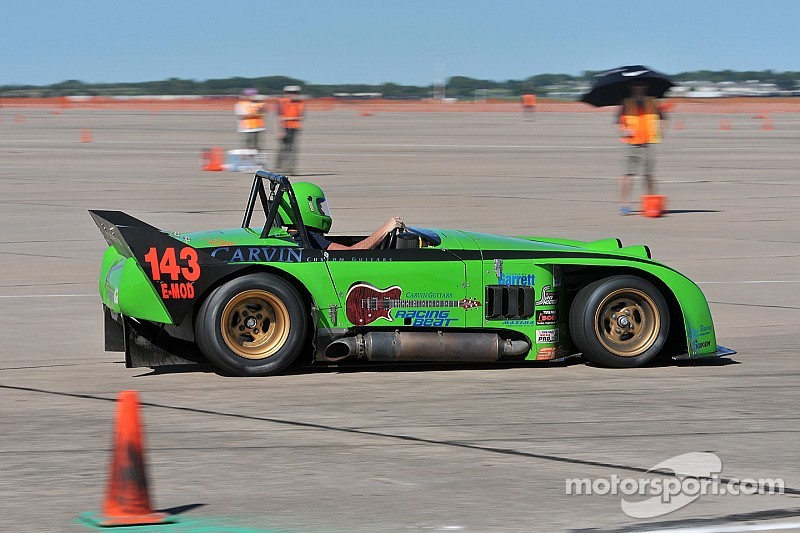 Nearly 1,200 competitors looking for a trophy.

The 42nd Tire Rack SCCA Solo National Championships got underway on Tuesday at the Lincoln (Neb.) Airpark, and though the air temperatures were high there wasn’t a cloud in the sky as the first classes of the nearly 1,200 autocross competitors set to run this week ran their first heats.

Thirty-six classes ran for the first day of the Tuesday/Wednesday sessions. Drivers are scored in their best of three runs on each of two courses, running on one course per day.

On the East Course, Jeff Kiesel, of Poway, Calif., is halfway (in photo) through extending his National Championship winning streak to nine years by taking the day one lead in E Modified. Kiesel holds a 2.357 second advantage in the No. 143 Avon Tire/Roger Kraus Racing KFR Turbo Sprite.

“We’ve been really busy at work at Carvin Guitars, and the day to day operations have been growing,” Kiesel said. “We haven’t done any development on the car, and barely any maintenance – after my wife ran this morning, we had a throttle position sensor go out and we just fixed it in time.

“We’re enjoying being out here, it’s a lot of fun. I try to always go for a personal best. That’s all I look for, I don’t worry about what everyone else is doing. I put everybody out of my mind and if I’m happy with how I drove and feel like I got everything out of it, that’s good enough for me. That’s what I’m looking for tomorrow, I just want to get out of the car and feel like I’ve done my best. The guys are all getting faster in this class, and it’s fun.”

In Kart Modified, Paul Russell – hot off a Tire Rack ProSolo win and season-long Championship – led the way in the No. 101 Seventh-Gear.com Tony Kart Honda by 0.602-second over Daniel Wendel (No. 44 Pinkies Out Racing Top Kart Racing Speedy TM), with Larry MacLeod (No. 81 Because Left Hand Honda Energy) just another 0.112 behind.

Their counterpart in Kart Modified Ladies, Kate Regganie, drove her No. 21 Honda kart to the top of the class charts by 0.204-second over Neva Hoover. More impressively, it’s the first full year of a shifter kart for the 17-year-old Regganie, who came through the Formula Junior program.

“It’s kind of crazy,” Reggenie said. “I grew up in the karts, but I never thought I’d be leading. Last year was my first year in the shifter. The biggest change is shifting, and the clutch. I’m still getting used to that. The shifting you do out there is insane, but I love the speed difference.”

“I’m nervous. I’m always nervous, though. We’re all so close, and all such good drivers, that it should be very interesting.”

Street Touring R is no longer the largest class in Lincoln, but with 41 cars is amongst the tops and the competition is just as fierce. Nick Barbato’s No. 191 Karcepts/Adidas Motorsports Honda S2000 led the way by just 0.244-second on the longer East course, with Ken Montonishi’s No. 192 OS Giken/ARE/Winmax/bjoinfilms. com Honda S2000 and Matthew Braun’s No. 98 PowerPlug Honda S2000 both within a half second.

Heat one on the tighter, and more technical, West Course was highlighted by close competition for the top spot in E Street Prepared. Billy Brooks (No. 78 Subaru WRX), of Austin, Texas, finished the first day of competition with a 0.047-second margin over Greg McCance in the No 178 Fastndrunk Subaru WRX. In the No. 199 StranoParts.com/Evolution School Chevrolet Camaro Z28, Dave Ogburn III claimed the third position.

Super Touring Xtreme was the largest class of the day, and the largest of the meet. Among the field of 67 drivers were some of the top competitors in SCCA Solo, including former National Champions Steve O’Blenes, Craig Wilcox, Andrew Pallotta, Mike Simanyi and Bryan Heitkotter, who all finished the day in the top 15.

It was Lance Keeley, of Brookfield, Wisconsin, the 2012 champ, who took the class lead in the No. 108 Nameless Performance/Bartuned/Link Garage Subaru BRZ. His 0 079-second gap back to second-place Jason Ruggles (No. 51 Awesome Fossum’s Hair Care Mazda RX-8) is not secure, by any means, as Heitkotter (No. 18 Team KW/K1 Motorsports/AIT Nissan 200ZX) lurks close behind, in third.

More information on the Tire Rack SCCA National Championship is available at www.scca.com/solo.

SCCA Majors season just one race from finish in Topeka