Taking on the world's toughest off-road event in a scrapyard Range Rover.

Being a 'Rover'ing reporter for LRW is an amazing job and I spent last year travelling the world with my notebook and camera to cover Land Rover exploits in some of the world's most iconic off-road events; Gigglepin's Jim Marsden winning the Croatia Trophy, Kari Sihvonen taking the Proto class by storm in the legendary Ladoga Trophy in Russia, a works-supported Philippeno 90 in the Rainforest Challenge in both Malaysia and China... not to mention Bowlers in the Abu Dhabi Desert Challenge, Desert Warriors in the Egyptian Pharoans Rally and a Nemesis on the Africa Eco Race to Dakar...

But my favorite story came from the other side of the world, the rocky wastes of Mexico's Baja Peninsula... and an unlikely group of heroes...

In my opinion the quintessential Land Rover story needs to include several key ingredients; an old work horse that has been christened with a new name, a group of close friends, a lot of beer, some spare parts, a large hammer and an impossible dream... and at the start in the northern Mexican town of Ensenada the 'In Search of Experience Racing Team' in their very standard '89 3.9efi Range Rover Classic ticked all those boxes. 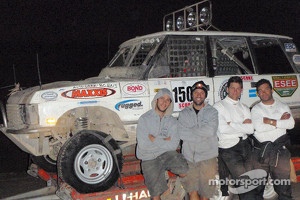 A beer-fuelled evening a few months before had led to a trip to a scrapyard to drag out an accident damaged write-off which they for some reason called Steve. With not a lot more race preparation than taking the glass and upholstery out, they rolled up to the start of what many say is the world's most gruelling off-road event... This is surely the stuff of LRW legend!

Held in Mexico's Baja Peninsula since 1967 the Baja 1000 is unquestioningly one of the world's ultimate and toughest off-road events. It consists of just one single stage... but it is 750 miles long and constantly winds from sea-level up to 2000 metre mountain passes, crosses deserts, dried up lakes and endless rock beds...

There's not much found on standard vehicles that can take such extreme punishment and that's the reason why this event has spawned the extreme engineering masterpiece Trophy Trucks it's famous for... 850bhp V8s bolted into spaceframe chassis' with incredible suspension set-ups and massive 40 inch tyres.

The best half-million-dollar trucks take some 14 hours to get around the course at an average speed of about 45mph, and if half the field makes it back before the 32 hour time limit... then the organisers promise to make next year's event harder! Basically, only very serious applicants need apply...

I do have to confess though, that even though they were the only Land Rover based vehicle in the whole 278 car field I was a little disappointed that there wouldn't be enough material to make a story as it seemed pretty obvious their hopes would fall to pieces with the rest of the car just a few kilometres from the start... 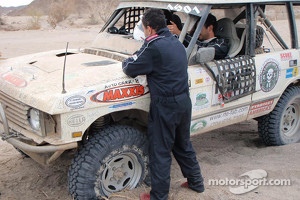 Ready to get back on the demanding route

I wished them luck but as I pushed my way through the thick throng of local spectators I didn't really have much hope that I'd be seeing them again...

But that is not what happened...


Back in Ensenada a couple of days after last seeing them at the start I found the team waiting for breakfast at a road side cafe and wandered over to see what had gone wrong and to offer my commiserations... but the glassy-eyed guys were all high with excitement.

With dust-matted hair and blood-shot eyes the four who'd been driving had permanent wide smiles and the service and chase crews looked equally as wrecked and as the breakfast burritos arrived, team kingpin Elias Christeas burst out with the story.

“Man!” he sighed with a huge smile on his grimy face. “How amazing! Right near the start some $400,000 Trophy Trucks with rear wheel drive were stuck in the sand and up the steep tracks doing 1mph with 4000rpm going 'Rrrrrrrr' and with our 4x4 we just sailed right by.

They were watching us go by like we had some super-truck that they just couldn't believe. They were quite embarrassed! OK, so the Rangie is not quite absolutely standard... We have excellent Rovertym Engineering suspension mounting hardware that performed brilliantly! Urm... what else... 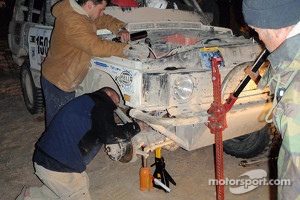 There's a Crower camshaft in the engine, it has a Disco low box and a Disco 2 double cardan front prop, Bilstien shocks and a Protronics ignition system that does away with the points, but apart from that and the roll cage we made ourselves and the Maxxis tyres, it's stock! Oh, and the bonnet scoops are from a '82 Nissan 280Z!”

When he'd caught his breath I asked him to start from the beginning and to tell me some of the highlights. “Well, right near the start we were heading up to the summit of a mountain pass at 5800 feet, this was pretty much a straight up boulder crawl.

On the steepest part I can see this VW Bug stuck right at the top so was thinking how to get around it, but if we lost momentum that would be it, stuck as well.

It was like 33 degrees up, banging over these huge rocks, and the Bug was stuck at a 45 degree angle leaning over toward us, but he was waving us passed even though there was the wall on one side and then the ledge on the other.

But we thought 'This is the Baja where God smiles on the brave.' We were so close, the wheels were in the air, but we made it!

At night the silt dust from the dry lake beds is like talcum powder, it's a blackout, you can't see anything, but you have to keep going. We got stuck once, so Rob got out, ripped the sunroof off and we used it to drive on!

But the terrain was so hard that we couldn't tell we had a flat tyre and a broken wheel. The team radioed and asked how the truck is and we said, “Yeah, its fine!”

But when we got into the pit what was left of the tyre was almost on fire. We must have gone dozens of miles on it without being able to tell! 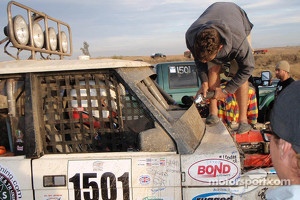 Not a good sign but the crew deals with the breakdow

But one of the most amazing things is that at one point we were actually leading the class! There was a guy in a $100,000 Ford Bronco and we were ahead of him... in a Rangie from a scrapyard!

But then we had a problem with the engine mounts disintegrating and the only thing we could do was ratchet the engine down to the chassis.

Also the suspension is absolutely great on the rocks where we were crawling along at 1mph it gave us a great advantage, but on the fast stuff, the open tracks where we were pushing 90mph, we found that it's not good at high speeds and we got shook to bits.

The shock mounting sheared off and the top of the shock was thumping against the inside of the bonnet for a while. We had to stop to weld the turret back on... but it came off again.

But we were still going after 29 hours though, but it was starting to get dark for the second night and then on the radio we heard about cars falling off the track on the mountain trail ahead and we were still a long way from the finish, another 8 hours or so, so even though it was before the 32 hour limit we decided to call it quits.

But we were still going! We just ran out of time that's all, so actually the whole experience was pretty damn amazing... And the biggest memory I'll walk away with is how the Baja community is very much like the Land Rover one, because the best of human nature comes out here. 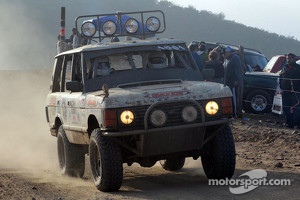 There is always next year

Total strangers help each other out so that you can keep going. I tell you, every hardship and difficulty is worth that and I can say that I have fallen in love with the Baja now.

We're all still bruised and properly sleep deprived but we're already talking about next year!”

As I scribbled down my notes it started to think it sounded like something out of a Hollywood script, poor boys with a dream, going through hell but coming out as heroes... but Hollywood isn't exactly too far away from what it was!

Elias is an actor in Los Angeles! Any script writers reading this?

And so this is a story for true Land Rover fans. A tale of a strict budget, beer, friends and a beloved old Range Rover... putting them all together and managing to achieve much more than you ever dreamed. The 'In Search of the Experience' team... the stuff of legends!

But the story doesn't end here. “We've got some serious upgrades coming for Steve,” Elias smiles. “We're focusing on the suspension which was our weak point and all the Baja veterans say that the Baja is always about suspension.

We'll keep the great Rovertym links but will trash the turrets and go with rigid, chassis mounted hoops... the same set-up the million dollar guys use.

But we're a very small team, only 4 guys and what we gain in intimacy we lose in capacity for massive logistics... which is what the 1000 requires.

King of the Mountains - Ultra4 Europe (Day One)