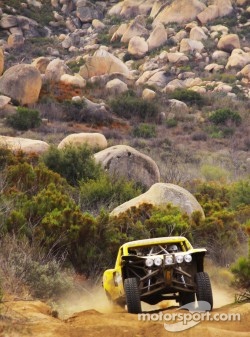 LOS ANGELES—Racing all season long with a maturity level well beyond his years, Las Vegas rookie Bryce Menzies closed the books on the 38th year of Sal Fish’s SCORE Desert Series, the world’s foremost desert racing series, relishing in his first season in the marquee SCORE Trophy Truck racing division by earning the Overall and SCORE Trophy Truck point championship by one of the closest margins in the 18-year history of the sport’s most spectacular racing class.

Menzies, just 23 years old, will receive his awards Saturday in SoCal at the Atrium Hotel, located adjacent to John Wayne airport in Irvine, during the annual SCORE Awards Night celebration honoring the 2011 SCORE Desert Series point champions, the winners of the 2011 SCORE Off-Roadsman of the Year awards and the 21 winners of the 2011 SCORE Toyota Milestone Awards. A total of 497 racers competed in the 2011 season, covering 1,762.02 dusty, dirty, grinding and grueling desert racing miles during the five-race season.

Coming out of the starting gate swiftly to win the first race of the season, Menzies led the season point standings from start to finish, winning two races overall and in the featured SCORE Trophy Truck division, and finishing third in two more along with one sixth-place to earn his first SCORE championship by 17-point margin over Las Vegas veteran Rob MacCachren, 46, a former mentor to Menzies when they were on the same short-course racing team for Menzies Motorsports.

Menzies opened the season by winning the SCORE Laughlin Desert Challenge in January, drove to a penalty-free victory as well in June’s 43rd Tecate SCORE Baja 500 to pull further ahead in the SCORE Overall and SCORE Trophy Truck point standings in the No. 70 Menzies Motorsports Ford F-150. Sandwiched between his first two career SCORE race wins in the marquee racing division for high-tech, 850-horsepower, unlimited production trucks, Menzies finished sixth in SCORE Trophy Truck at the 25th MasterCraft Safety Tecate SCORE San Felipe 250 in March. On Sept. 10 Menzies finished third at Tecate SCORE San Felipe Challenge of Champions and ended his championship season with a solid third-place podium finish at the 44th Tecate SCORE Baja 1000, the granddaddy of all desert races.

SCORE points are based on starting, finishing, placement and number of official starters within each class. Menzies, who had only raced the 2010 SCORE Baja 500 where he finished seventh in his first start in SCORE Trophy Truck, finished with 445 championship points in the five-race 2011 SCORE Desert Series. SCORE Trophy Truck has had the largest starting field for all five races with 32 in Laughlin, 24 in San Felipe, 28 in the first Ensenada race, 13 in the second San Felipe race and 29 in the season finale in Ensenada.

"I have been living a dream and I don’t want it to end, this is truly unbelievable and I owe it all to my father and the amazing race team he has put together,” said Menzies regarding his championship run. “We have been consistent, we have been fast and we beat the best desert racers in the world. I don’t know what I can do for an encore, because this class and the SCORE Desert Series is so super competitive. Maybe I surprised some people this year, but I won’t surprise anyone next year. I learned a lot this year and we had great success. Hopefully, I will be a good student of the sport to help me and our team improve even more in the future.”

With three impressive class wins, a second and a seventh this year, second in overall points and winning the unlimited class 1 is Justin Davis, just 18, of Chino Hills, Calif., finishing just five points behind Menzies with 440. Davis, last year’s SCORE Lites point champion, won Class 1 in Laughlin and San Felipe and was a close second in Ensenada in June, seventh in the September San Felipe race and won his class again in the season-finale in Ensenada driving the Green Army Motorsports Chevy-powered ESM open-wheel desert race car.

Finished second in Class 1 and fifth in overall points this season bolstered by his third place Class 1 finish in the Tecate SCORE Baja 1000 is Brian Parkhouse, Long Beach, Calif., in a Jimco-Chevy.

The McMillins also have two SCORE Trophy Truck entries in most races, one driven by Mark McMillin, Luke and Daniel McMillin’s father, and the other shared by Jessica McMillin’s brother and father, Andy McMillin and Scott McMillin. Andy and Scott actually split the driving with Jessica McMillin during the September San Felipe race, helping her win her fourth Protruck race of the season and finish an impressive 14th overall in the No. 1331 McMillin Realty Ford F-150. Jessica McMillin was the only racer to win her class in all five SCORE races in 2011.

Neither of the McMillin SCORE Trophy Trucks raced in September’s San Felipe race but both had strong performances in the season-finale with Andy and Scott winning the overall 4-wheel and SCORE Trophy Truck title for the second time in three years in the No. 31 McMillin Realty Racing Ford F-150 and Mark and Daniel finishing fourth overall and in SCORE Trophy-Truck in the No. 23 McMillin Racing Ford F-150. Daniel McMillin ran the first four races of the season in Class 1 including winning his class in the September San Felipe race.

RPM Off-Road earned 11 class wins in the 2011 SCORE Desert Series on the way to winning an unprecedented five SCORE class season point titles. Matney, 26, as one driver of record for the team, won season crowns in Class 8 (Chevy Silverado), Class 11 (Stock VW Sedan) and Stock Mini (Ford Ranger) while Stacy, 66, the team’s other driver of record who also finished eighth in his first season in SCORE Trophy Truck, won the 2011 SCORE class championships in Class 4 (PSD-Chevy) and Class 17 (Jeep Wrangler). Stacy won Class 4 in four of five races in 2011 and Matney won Class 8 and Class 11 each three times during the 2011 campaign.

Following a season-ending second place finish in the Tecate SCORE Baja 1000, Phoenix’s Nick Vanderwey ended the year sixth in Overall and fourth in SCORE Trophy Truck points with 392 points in the No. 84 Flying Dutchmen Chevy Silverado.

While it is the first SCORE class crown for Bevly III, for Chamlee it is his seventh SCORE Class 7 season point title and sixth straight. It is the ninth career SCORE Class 3 championship for Moss, second straight for Hanna, and third straight for Carr.

Among the other 2011 SCORE point champions in car and truck classes after are Rafael Navarro IV, Temecula, Calif. (SCORE Lites, Jimco-VW) and Sergio Salgado, Mexicali, Mexico (Class 10, Jimco-Honda). With one class win each during the 2011 season it is the first season title for the rookie Navarro IV and the second straight for Salgado.

With motorcycles and ATVs racing in the three traditional SCORE Baja races, the overall motorcycle and Class 30 (riders over 30 years old) point champion with 280 points after winning all three races this season is the team led by Mike Johnson, El Paso, Texas on a Honda CRF450X. It is Johnson’s third straight Class 30 and SCORE Overall motorcycle title, although last year he was a co-rider for rider of record Francisco Septien, who was a co-rider for him in this year’s season-finale in Mexico

Winnning the open Class 22 title for the first time and second overall among motorcycles is the JCR/Honda team led by Colton Udall, San Clemente, Calif., with 273 points and one race win this season on a Honda CRF450X.

Following their third consecutive Class 24 ATV class win of the season at the Tecate SCORE Baja 1000, winning the overall ATV and Class 24 point championship with 294 points is the team led by Brandon Brown, Umatilla, Ore. on a Honda TRX450R. Brown and his team won both the Class 24 and SCORE Overall ATV point title for the second straight season.

Insley, a former All-America football player for the University of Nevada and former NFL player who has the all-time collegiate record for yardage in a single season, won his first SCORE class season point championship after winning Class 21 in two of three 2011 SCORE Baja races. Kaplan, who won his first SCORE class point championship in 1979, has been part of this Class 40 championship team that has won four of the last five titles, Dizney picked up his third SCORE class title and first on a motorcycle and Lewis, 67, won his age group class for the fourth time in the last five years and second straight.

In addition to season class point championships, the racers also competed for part of the nearly $400,000 in cash purse and contingency postings each race. Drivers in the Pro car and truck classes also attempted to earn prestigious SCORE Toyota Milestone Awards given to all car and truck class drivers who complete every required mile-1,762.02 miles-of the five-race season. Being presented by Toyota Motorsports for the 26th consecutive year, a total of 21 drivers earned the awards for the 2011 SCORE Desert Series.

Racers are also competing for the annual SCORE Off-Roadsman of the Year awards, including the MasterCraft Safety SCORE Rookie of the Year award. All categories, except Engine Builder and Original Buggy Chassis Manufacturer, are determined by public on-line voting while Engine and Buggy awards are determined by season points. Winning the 2011 Engine Builder Award is Kroyer Racing Engines while the top Original Buggy Chassis manufacturer is Jimco.

Riding with the Desert Assassins in the Baja 1000