Saddle up because Craig Dollansky is set to make his season debut with Big Game Motorsports this weekend.

Inside Line Promotions - WINDOM, Minn. (April 8, 2014) - Dollansky and the Big Game Treestands team will kick off a schedule of approximately 50-to-60 events this Saturday with the Midwest Open Wheel Association at 34 Raceway in West Burlington, Iowa, where Dollansky dominated last season's World of Outlaws STP Sprint Car Series event. 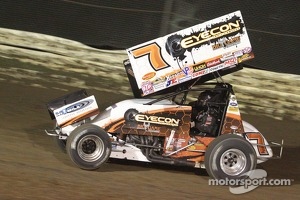 "I'm chomping at the bit and feel like a caged animal looking forward to get after it," he said. "I can't thank Tod and everyone at Big Game enough for the opportunity this season. This is something different for myself and my family outside of what we've done the past few years. We're looking forward to it and embracing it. There's a lot of benefits to it."

Following the race at 34 Raceway, Dollansky will compete weekly at the famed Knoxville Raceway in Knoxville, Iowa, which opens its season on April 19. Dollansky hasn't raced for the Knoxville Raceway championship since 1995, when he placed third in the standings.

Adding to the prestige of winning at the premier track along with the $20,000 prize to the track champion, Knoxville Raceway and MAVTV have partnered to showcase the weekly racing on national television. In addition to highlights of the racing, the television program will include features on several drivers.

"First of all I think TV is the driving force behind any sport," Dollansky said. "Unfortunately in sprint car racing there hasn't been a whole lot of TV coverage. It's great to see Knoxville put a package together with MAVTV and we're very excited to showcase the Big Game Treestands brand on television each week."

Dollansky, who ranks 10th on the World of Outlaws all-time wins list, will also compete in approximately two dozen Outlaws events this season. Highlighting that schedule will be the 54th annual Knoxville Nationals (Aug. 6-9 at Knoxville Raceway) and the Ironman 55 (Aug. 2 at Federated Auto Parts Raceway at I-55 in Pevely, Mo.).

While Dollansky has claimed the past three Ironman 55 events, he is seeking his first career Knoxville Nationals title. Dollansky has seven top-five finishes at the Nationals, which is the most of any driver who hasn't won.

Dollansky is banking on the weekly experience to help him prepare for a run at this year's Knoxville Nationals title.

"It's difficult to go in there prepared properly when you're racing on the World of Outlaws tour," he said. "For our Big Game Treestands team it's going to be beneficial racing weekly and I think I'll be more prepared than I've ever been."

Saturday at 34 Raceway in West Burlington, Iowa, with the Midwest Open Wheel Association