Momentum continues to build for Derek Hagar, who improved to 3-for-4 on the season with another victory last Saturday at I-30 Speedway.

Inside Line Promotions - LITTLE ROCK, Ark. (April 8, 2014) - Hagar charged from ninth to capture the feature win on the quarter-mile track, which hosts the Lucas Oil ASCS National Tour this Saturday.

"I think we're going to have good momentum going into the ASCS National Tour race this weekend," he said. "We have a real good feel on the car. Hopefully we can go out and get another win, which would be our first with the ASCS."

After advancing from third to second place during his heat race last Saturday, Hagar earned enough points to start on the inside of the fifth row for the main event.

"On the first lap they had a red flag and a couple of cars in front of us crashed," he said.

That moved Hagar to sixth for the restart and he capitalized by quickly maneuvering into fourth place.

"Then we ran third for the first part of the race and the track started coming to me," he said. "We were doing slide jobs for the lead. It was a fun race track. It was probably the raciest I've ever seen Little Rock." 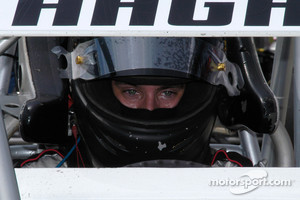 After restarting second near the midpoint of the main event, Hagar powered into the lead entering turns one and two.

"I was expecting (the leader) to block the slide job and he didn't," he said. "I slid him going into turn one and took the lead and never looked back from there. When we came around to get two to go I was coming off turn four when Matt Covington blew a motor so they threw the caution. I had to make sure I tippy-toed real nice on the restart so I didn't hit any holes where it messed me up."

Hagar executed the closing laps on the slick track to perfection en route to his third win of the season. It also marked his third win at I-30 Speedway since 2010.

Saturday at I-30 Speedway in Little Rock, Ark., with the Lucas Oil ASCS National Tour