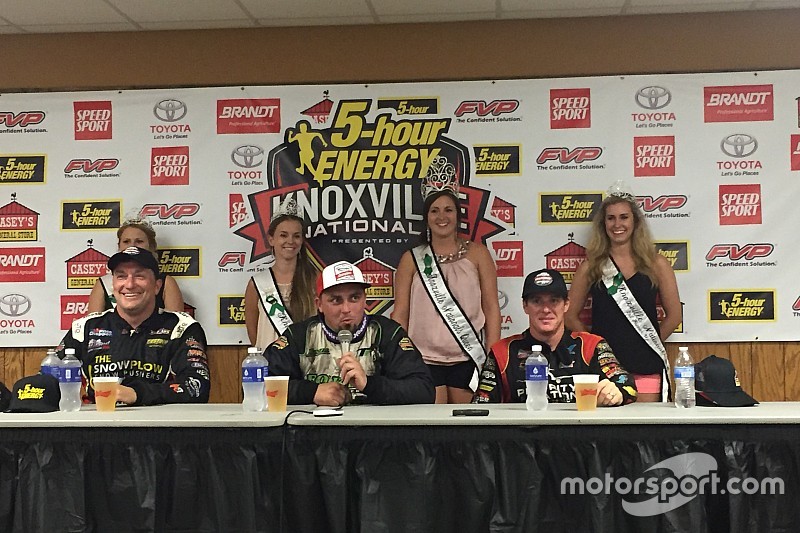 Tim Kaeding won the A main in the 5-hour Energy Knoxville Nationals on Thursday night at Knoxville Raceway.

After Ricky Stenhouse Jr. led the 24-car field on the parade lap in Bryan Clauson’s No. 17w sprint car in a tribute to the fallen driver, it was a mad dash for driving racing each other — and the approaching rain.

Dale Blaney started on the pole and led before Kaeding took the lead on the third lap. He held off Blaney until the caution on Lap 14 when Justin Henderson, who was running third at the time, lost power with 11 to go. Kaeding held the point when the race returned to green with Blaney, Jason Johnson, Terry McCarl and Kerry Madsen rounding out the top five. But Blaney quickly faded and Johnson moved to second.

Kaeding easily held off Johnson at the checkers by 2.273-seconds. Local favorite McCarl completed the podium followed by Madsen and Blaney rounded out the top five.

Kaeding dedicated his win to Clauson, who passed away from injuries sustained last Saturday night in a wreck in the 2016 Belleville Midget Nationals.

“I know I’m ready for a beer, because this is way too warm inside this thing,” Kaeding said in the winner’s circle. “I’m usually qualified about 28th right now and for me to qualify 13th at this race is a feat within itself. We’ve worked hard to get here. Took her a few steps away from racing here week in and week out.”

“I told my car owner I just need to stay away from this place as much as possible, because I do better when I just show up and race. I proved that tonight, and now we’re definitely going to be drunk.”

Johnson’s 481 points were the most earned on Thursday night. Daryn Pittman, who finished fourth in Wednesday night’s A main, had the most points (485) after both nights were tabulated and will start first in the A Main on Saturday night with Johnson alongside. Kerry Madsen and Jamie Veal with comprise the second row followed by nine-time Nationals winner Donny Schatz, Chad Kemenah, Brad Sweet and Shane Stewart.

NASCAR’s Kyle Larson finished 14th in the No. 57 car. He'll start third in the B main on Saturday.

With severe weather in the area, officials warned prior to the evenings events that the track was in “rain mode” and competitors rushed through the mains, heats and time trials before rain hit the track around 10:15.

Polesitter Brad Sweet battled Joey Saldana in the B main on the opening lap in the 12-lap race.

Saldana passed the No. 49 car in the fourth turn to take the lead. However, Sweet came back with three laps remaining and regained after making contact with Saldana between Turns 1 and 2.

Sweet held off David Gravel at the line by 0.06-seconds with Kyle Larson and Gary Taylor moving on to the A main. Danny Lasoski, a four-time winner of the Knoxville Nationals finished fifth. Saldana was sixth.

Jon Agan went flag-to-flag in the C main to win with a 0.642-second advantage over Tim Shaffer

Shaffer started seventh and cruised up through the field passing Greg Wilson for second on Lap 8 in the 10-lap race. Wilson ended up third and DJ Netto, who finished fourth, transferred to the B main.

Rager Phillips won the first 10-lap heat race with Clint Garner, Justin Henderson and Terry McCarl transferring to the A main. McCarl had engine issues and had to make a change prior to the feature.

Ryan Bunton was the top driver in Heat 2. Dale Blaney, Chris Martin and James McFadden rounded out the top four.

Brent Marks was victorious in the third heat. RJ Johnson, Tim Kaeding and Cap Henry joined Marks in the A main.

Jac Haudenschild took the checkers in Heat 4. Jason Solwold, Mark Dobmeier and Kerry Madsen moved on the A main.

In the fifth and final heat, Brooke Tatnell was victorious with Bill Balog, Dustin Selvage and Jason Johnson earning the last transfer spots in the A main.

Brad Sweet posted the top time early in qualifying with a lap of 15.465-seconds. Sweet collected 200 points for posting the fastest lap.