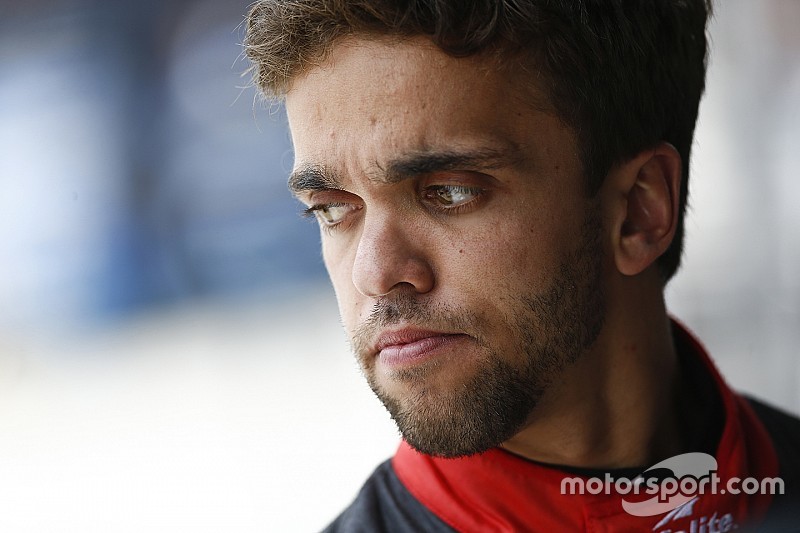 Rico Abreu won his first feature in the Knoxville Nationals on Friday night.

Abreu came from to a field of 77 contestants to become the 196th feature winner at Knoxville Speedway. His victory in the 410 A Main allowed him to transfer to the Saturday's A Main in the Knoxville Nationals.

“I had to park it for BC,” Abreu said as he climbed from his car.

Abreu shot to the lead on the first lap with Danny Lasoski in chase followed by Brian Brown and Lucas Wolfe. Abreu led 25 laps and finished 1.536-second ahead of Greg Hodnett.

"I was just trying to pick and choose (spots in lapped traffic)," Abreu said. "My wing valve brole , so my wing kept going back down the straightaway, and I'd get in the corner and it's go back down.

"But Paul Silva built a great car tonight. It takes great track position, it takes good decisions, it gets all put together in one night and that's how you win these races."

The only yellow flag came with four laps remaining, when Brown, who was running fourth at the time, hit the stalled car of Trey Starks in between Turns 3 and 4. When the race returned to green, Abreu shot out to the lead followed Hodnett, Lasoski and Wolfe — all who transfer to Rows 9 and 10 in Saturday’s feature.

Does Abreu believe he has a shot to win the Knoxville Nationals on Saturday?
"I know we've got a good car," Abreu added."It'll just be how bad I mess it up Tonight was a good confidence-booster, just because we've struggled so much here.
"I wanted to win. I was just bad-ass and I felt it. You know when your car's good and everything goes good, and this one's for our buddy BC tonight."

Justin Selvage won the AB Feature leading all 12 laps. Paige Polyak started on the outside of row but dropped to third after the first circuit. Kraig Kinser moved to second followed by Randy Hannagan, Trey Starks and Polyak holding onto fifth.

On Lap 7, Starks passed Hannagan for the third and final transfer spot. Selvage held the point by a 1.231-second advantage over Kinser.

Jacob Allen went flag to flag in the second B Main. Cap Henry, who started second, followed the No. 1A for all 12 laps with Cory Eliason in tow. While it appeared the top-three would transfer into A Main, Davey Heskin passed Eliason in Turn 4 on the final lap for third.

Allen’s beat Henry to the checkers by 2.233-seconds.

Danny Smith led the field to green in the C main, but didn’t hold the point for long. Parker-Price Miller came from in side of the second row to take the lead with Danny Smith moving to second followed Ray Allen Kulhanek and Kody Kinser,

Working Lap 7, Haudenschild had moved to second but then hit the cushion in Turn 2 and spun up by the wall. Price-Miller and Kulhanek led the field to green with Chris Martin and Smith behind. As the field was coming to Lap 8, Kody Kinser spun in Turn 4 while running 12th.

Price-Miller led the field coming to the green but Bob Weuve lost a tire into Turn 2 — which rolled down the backstretch to ignite the third caution on Lap 7. With three to go, Price-Miller, Kulharek, Martin and Smith were in the transfer spots. On the white flag lap, Brian Paulus challenged Smith which allowed Byron Reed to pass the No. 28AM for fifth.

Price-Miller held on to win the 10-lap race by 2.502-seconds over Martin. Kulhanek and Smith earned the final transfer spots.

Group A, Heat 1: Dave Blaney had the lead at the flag but was passed by Sheldon Haudenschild before completing the first lap. Lucas Wolfe passed Blaney on the second lap. While Blaney made a charge for Wolfe, he held on to second (-1.903) and Blaney finished third to earn the final transfer spot.

Heat 2: Bill Blalog moved out to the lead on the first lap with Rico Abreu moving pass Kraig Kinser for second. Stevie Smith came from the second row for third after the first circuit and the top three held position throughout the eight-lap race with Blalog finishing 1.036-seconds ahead of Abreu.

Heat 3: Brady Bacon jumped to the lead on the first lap with Tasker Phillips in tow. Joey Saldana came around Dustin Selvage for third to earn the final transfer spot. Bacon took the checkered 1.441-seconds ahead of Phillips.

Group B, Heat 1: Rager Phillips took the lead on the first lap followed by Dakota Hendrickson. Danny Lasoski passed Hendrickson for second in Turn 3. As the leaders came around to the front stretch, the race was red-flagged when Jacob Allen, who was running fifth, flipped in Turn 3 before completing Lap 5.

Officials red-flagged the race with Phillips in the lead and Hendrickson second. Allen’s crew repaired the car and he hoped to restart 12th, but officials deemed the car not safe to race.

When the race returned to green, Hendrickson took the lead from Phillips and Lasoski moved up to second. Matt Moro, who restarted fifth passed Phillips for the final transfer position with two laps to go. Hendrickson held a 0.187-second advantage over Lasoski at the line.

Heat 2: Willie Croft led all eight laps to win the second heat in Group B. Cory Eliason held onto second for the first four laps until he was passed by Greg Hodnett. Logan Schuchart, who fell to fifth on the second lap, passed Davey Heskin and Cory Eliason by Lap 5 to finished third. Croft’s advantage over Hodnett was 0.450-seconds.

Heat 3: The drivers had completed the second lap when Tyler Courtney spun in Turn 3. Brian Brown, Tim Shaffer and Matt Juhl were the top three when the race returned to green. Fourth-place Cap Henry challendged Juhl, but the No. 09 held on for third. Brown checked out to a 4.518-second lead over Shaffer at the finish.

What off-week? Kyle Larson gearing up for Knoxville Nationals