Mark Burch Motorsports and driver Danny Lasoski kicked off this season as strong as the program ended last year.

Inside Line Promotions - GREENWOOD, Neb. (April 7, 2014) - The team combined to score a victory on Sunday during the finale of the ASCS Midwest Region season-opening doubleheader at I-80 Speedway with Lasoski driving from third place to the lead in the final three laps.

"We love racing together," Lasoski said. "To be able to go to I-80 Speedway and win is great, especially with it being in Mark's backyard." 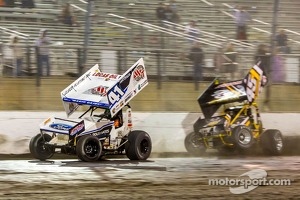 Lasoski started the weekend on Saturday by advancing from fifth to fourth place in a heat race, which earned him enough points to lock into the main event. After starting on the outside of the seventh row, Lasoski powered the Mark Burch Motorsports entry into the top five before ending with a seventh-place result.

"For starting as early as they did and with the wind they had, the track was phenomenal," Lasoski said. "You couldn't do any more than they did. It was tough that it laid rubber that early. We had a better car than that. It was driver error. I burnt the tires up."

The team took the lessons learned on Saturday into Sunday's event, which began with Lasoski claiming his heat race. That earned him a spot in the feature redraw and he pulled the No. 7 to start on the inside of the fourth row.

"I made sure we didn't run the tires off it," he said. "I never do this, but I actually looked at the scoreboard. I wasn't going to race until seven or eight laps to go. I don't even know where I was at position-wise. We had a caution with about seven laps remaining and from that point on I went as hard as I could."

Lasoski, who worked his way into the top five before the late caution, maneuvered into the lead by using a different line in the rubber.

"I had moved down a lane and it hadn't locked down rubber, but it was cleaned off enough where you could get going through there," he said. "The two lead cars were married together. When I came through there I caught them both entering turn three."

Lasoski drove into the runner-up position exiting turn four and he continued his momentum into the lead in turns one and two with two laps remaining.

"After a less than stellar performance Saturday night, adjustments had to be made. Fortunately, our crew did a great job of getting us prepared over the winter for this first race. Shane, Cal and Scott did a great job having everything ready to go so all I had to do was jump in the truck and head to the track. Due to work and prior commitments it was only Danny and I Sunday night, but the preparation paid off from the work done at the shop as usual. The Dude drove a flawless race and saved his stuff until the end. The last lap is the one that pays and we had a car and driver who made those laps the fastest ones of the race."

Additionally, Burch wanted to show gratitude to several sponsors who contributed to the triumph.

"We really want to thank everyone at Tim Engler's shop for all of their R&D work over the winter. Their new stuff is really, really good and not just in 360s. Tim's injectors have been seeing their share of checkered flags with the World of Outlaws this season as well. Congratulations to Kasey Kahne Racing on their podium sweep the other night."

"Steve Huggins still grinds some of the fastest camshafts - bar none. Other companies have spent millions to try and duplicate one thing - win races. We are proud to win with Huggins Cams."

"Once again "Ole' Yeller" got-r-done. Doug Wolfgang's attention to detail and craftsmanship makes all the difference in the world. From Little Rock to I-80 to Knoxville and everything in between his cars have been the platform on which we rely on."

"Dave Shaw has built and maintained our shock program thanks to Speedway and Afco since the first set won at Devil's Bowl three years ago. While other teams tend to dial themselves out with their shocks, the consistency of our Afco gas bulb shocks is unsurpassed."