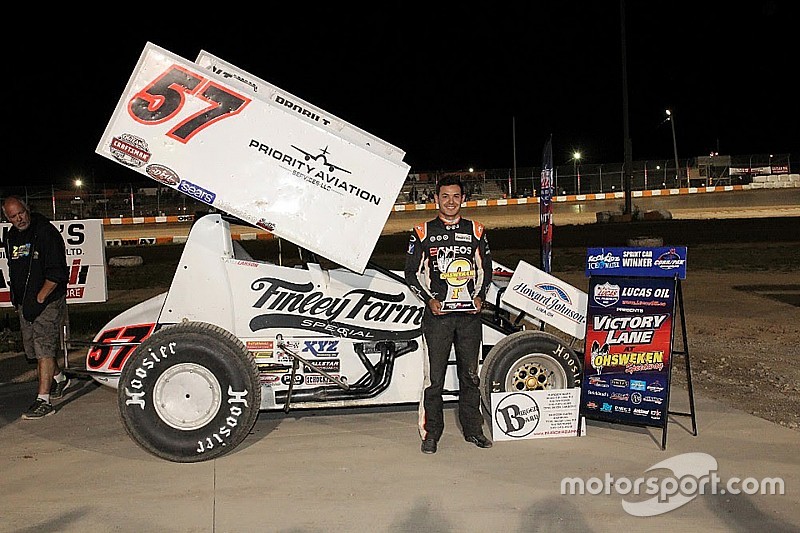 Larson started from the pole position and held off Parker Price-Miller in scoring the win in the 31-sprint car field.

“I knew he’d be good,” Larson said of Price-Miller in Victory Lane. “I’ve watched videos of him and he’s been really good here. His car had a lot of grip all night. I knew he’d be the one I’d have to beat. He got to the lead really quick and was ripping really hard up top.”

Larson and Price-Miller quickly pulled away from the field early in the race and Larson had his hands full whenever they caught lapped traffic. Price-Miller was able to take the lead in the race before Larson made his final pass and stayed out front for the win in front a near-capacity crowd.

“It started getting really slick and slow off four and I actually made a mistake on the backstretch and ran the bottom on accident because I almost clipped the wall,” Larson said. “I gained time on him so I was like ‘Okay, we can run down there’. Once we got to traffic I was able to work it and get by him on the bottom.”

Larson had to hold off Price-Miller on a final lap dash after a caution but held his line and scored the victory. He also enjoyed competing at the track, something he does several times a year throughout North America when he can visit a local dirt track.

“It’s an awesome race track,” Larson said. “This is one of the most fun tracks I’ve been to. It’s super slick, technical. The moisture was basically off the track, so you had to find that. I had a lot of fun racing with Parker.”

Price-Miller, who’s the reigning Canadian Sprint Car Nationals winner from last fall, wanted to beat the NASCAR star but was happy with the runner-up podium finish.

“I really wanted that one just because Kyle’s the best there is out there and it would be really cool to beat him,” Price-Miller said. “My guys gave me a great car and they fixed a lot of stuff from Friday night.

“I’m still a little sore and my arm kind of gets banged up racing, but you don’t think about it. It’s still a good night, but I like to win."

Larson and eight-time sprint car champion Danny Lasoski will also race Tuesday in the 30-lap, $10,000-to-win showdown along with a strong field of drivers.