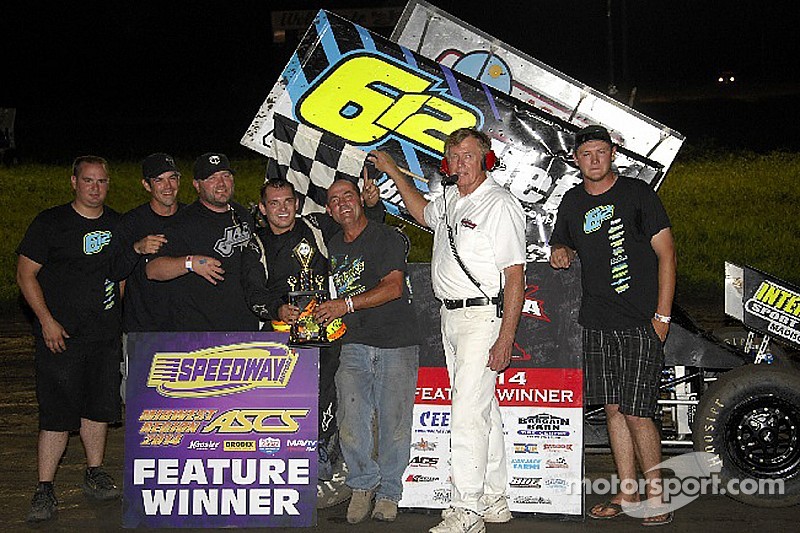 Are you ready for a little good news from the world of sprint cars?

In a scene reminiscent of the movie Rudy, Park Jefferson Speedway in North Sioux City, South Dakota, became the place where dreams come true.  After leading all 25 laps of the American Sprint Car Series race on the 4/10ths of a mile dirt track, Isaac Schreurs, who lost the use of his legs at age 14, pulled into victory lane.

But unlike other victory lane photos, the driver didn’t quickly exit the car.  Instead, with the crowd on its feet, a four-wheeler appeared with Schreurs' father aboard.  Rushing to the side of his son’s car, the elder Schreurs leapt off the back and reached into the cockpit and scooped his son up in his arms.

Then, father and son went around to the front of the car where the crowd roared its approval to the young 21-year-old.  Schreurs became the first paraplegic to win a major sprint car race. He has been racing most of his life, but his life changed in 2005 when he crashed while racing motocross. He fractured his T-3 vertebrae, and the South Dakota native was told he would be paralyzed from the chest down for the rest of his life.

But a racer wants to race, and he got back in the saddle competing on quads, then moved to sprint cars, using special hand controls. He raced locally, but the ASCS is a major series, and winning there is an accomplishment for any driver. The number of his winged sprint car is 612, and there's a huge handicapped wheelchair logo on the top wing.

A front row of Schreurs and John Klabunde led the American Sprint Car Series event to the green flag.  Schreurs quickly took the lead.  Facing multiple challenges from third-starting Cody Ledger, he continued to lead until lap 17.  Ledger put a slide job in front of Schreurs but the yellow flag flew, placing Schreurs back in the lead.

Schreurs once again led the field green until a violent flip from Jack Dover off of turn 3 which saw him flip over 50 feet until his car came to rest.  The accident was the result of a broken front axle.

Schreurs was able to hold the lead for the final laps to take the checkers.  He was followed by Cody Ledger, and Billy Alley rounded out the top three.  Schreurs will next take on the American Sprint Car Series at the upcoming 36th running of the Jackson Nationals on Labor Day Weekend, August 29-30.  Tickets and information are available at www.jacksonspeedway.com.

A to Z Promotions

Even without Tony Stewart, Bob Newton Classic a success