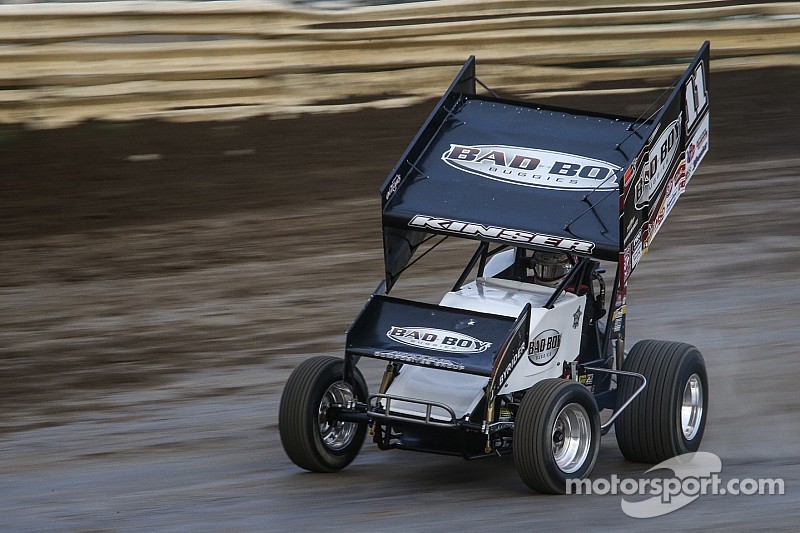 Tops Round 3 of the Winter Heat Sprint Car Showdown for owner Tony Stewart.

Fresh off his final full-time season with the World of Outlaws STP Sprint Car Series, Steve Kinser led the first two and the last 16 laps of the 30-lap feature on Tuesday night at Cocopah Speedway during CARQUEST Auto Parts and Bingham Truck & Auto Night 3 at the Winter Heat Sprint Car Showdown.

The win was Kinser's first at the track since the 3/8-mile oval hosted its lone World of Outlaws event in February 1991.

"I'd still like to be a little younger, I can tell you that, but I'm not," he joked. "But I'm not going to complain about my career. It's nice to get a win here."

Paul McMahan finished second, which propelled him into the lead of the event standings heading into the final weekend, with 12th-starting Brian Brown rounding out the podium to earn the $2,000 Hard Charger Award bonus thanks to Kim and Glen Hanson of Here 2 Wire Inc. in Lake Stevens, Wash.

"Hopefully the casino doesn't get it back," Brown said with a big grin. "I don't know who the Here 2 Wire people are, but I'm definitely going to shake their hands and thank them. That's what makes the event an event."

Kinser, who is affectionately known as 'The King' of sprint car racing and who drives for NASCAR veteran Tony Stewart, shared the front row of the main event with NASCAR sensation Kyle Larson - the most recent Winter Heat Sprint Car Showdown feature last Saturday. The duo traded the lead each of the first three laps with Larson sliding Kinser in turns one and two before Kinser powered to the top spot prior to the flag stand on Laps 1 and 2.

Larson's slide job on Lap 3 gave him the lead for approximately a dozen laps before his right rear tire went flat on Lap 15. Larson slowed to bring out a caution and was forced to the work area, where his team replaced the tire.

That gave Kinser the lead back for good. He went to the top groove as traffic entered the picture with approximately eight laps remaining, which allowed McMahan to close the deficit. However, Craig Dollansky, who was running in third place, flipped out of the track in turn one on Lap 24 to cause the final caution of the race.

Kinser took a commanding lead on the restart and sailed to the victory one race after violently flipping out of the track himself.

"From being in between the walls upside down to winning tonight I've got no complains whatsoever," he said.

"We definitely wanted to win tonight, but Steve had a good race car," he said. "It's good to see Steve back in Victory Lane. We had a good race car. We got by him one time and the yellow came out and he got his spot back. You can't show 'The King' the way around and not have him give it to you the second time."

Brown, who had nose wing damage from the opening lap, earned his first podium of the event following his wild crash last Saturday.

"The goal is not usually to run third, but the goal isn't to almost flip out of the ball park in the heat race either," he said. "From where we were the other night to where we are right now just speaks volumes about our team."

Henry Van Dam scored a sixth-place finish with Larson rebounding from last on the Lap 15 restart to end seventh. Christopher Bell advanced from 15 th to eighth, Joey Saldana was ninth and Dusty Zomer maneuvered from 18th to 10th.