You may not expect a five-time local track champion and current points leader getting choked up over an umpteenth win on his home turf. But that's exactly what Dean Freitas did after beating the USAC boys Sunday morning in the rain-delayed inaugural ...

You may not expect a five-time local track champion and current points leader getting choked up over an umpteenth win on his home turf. But that's exactly what Dean Freitas did after beating the USAC boys Sunday morning in the rain-delayed inaugural $20,000 Hawaiian Sprint Car Classic finale. He defended the honors of the partisan crowd by dominating the second half of the 40-lap feature at Hawaii Motor Speedway, leading reigning USAC Southwest Sprint champion Rick Ziehl and Friday winner Ronnie Clark across the finish line. 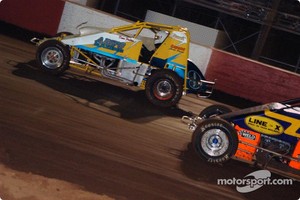 "Last night was a real emotional roller coaster," Freitas says of the unexpected rainout which cancelled the Saturday night program just before the Trophy Dash and sent the USAC crowd into a panic over getting themselves and their gear back home on time. While the mainland visitors fretted over the logistics of restaging the race, the Hawaiian veterans shrugged their shoulders and went home for the night. "We were all set up and ready to go when the rains came. We had to go home, rethink the whole process, and put it all together again for today. It's a really great day."

Despite frequent drizzling all morning on the way in from town, the sun came out and activity resumed as planned at 10:00 am, with Clark outrunning USAC's Brandon Lane and local star Gary Costa in the five-lap Trophy Dash. By then, the track had already begun drying out, necessitating myriad setup changes from Saturday night's traditional wet setup. By the conclusion of the feature, many of the survivors' treaded tires had worn down to nearly slicks.

For the driver dubbed "the Man With the Plan," Freitas lived up to his billing big time on Sunday. "We had a little bit of a game plan going - we had the car set up real tight for the beginning of the race. We changed some torsion bars, shocks, gears, and some rim offsets - quite a bit between night and day. Thank God it was the right one! We went backwards a couple of positions (after starting second), but about midway through, the car started coming to me to where it was really driveable and comfortable and I could make a few passes. From then on, it was a matter of trying to keep the tires under the car. The track got really abrasive and started taking up a lot of rubber. There's not a whole lot of laps left on these tires, but we were able to conserve enough to bring it home."

Ziehl passed Clark for the lead on lap four and led handily until being chased down by Freitas on lap 20. "There were concerns today about the tires living, but fortunately they did. I was running pretty good although Dean got by me. He did a real fine job. I was just trying to stay by him - it looked like he might blow a tire because he was smoking it pretty hard. I was trying to stay close just in case that happened, but my car started vibrating in the corners a little bit. I thought I'd blistered my tire, but what really happened was the fuel valve got shut halfway off. Second's not where we wanted to be, but we're glad to be in the top three anyway. I don't know if we would've beaten him (otherwise), but we would've been closer to him. He'd have known I was there; it would've been a little more of a race at the end." 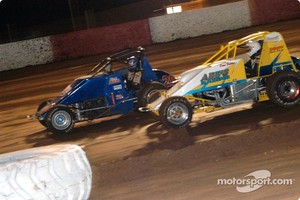 Clark, who kicked off his banner weekend with his first career USAC victory Friday night, continued his hot streak into the Sunday morning sun. "Friday we got lucky, hung in there and got the win - today we just kinda did the same thing we started running pretty fast out there today, maybe with a couple more laps, we could've gotten up there in front and give the Hawaiian guy some competition; unfortunately he had us beat and drove a good race. The track got really dry on Friday night as well as today, so we tightened up the car a lot more because we figured it would dry out a little more; actually we ran pretty loose Friday when we won.

"The track was really dry until it started to take rubber and get fast again there at the end again; that made it pretty racy. The delay kind of upset us because we felt pretty fast yesterday after hot laps. We felt we probably could've done better right off last night, but third's not bad, so we're not complaining."

Lane and Bruce St. James rounded out the top five, with locals Shawn and Albert Ternora Jr. (the highest placed Hawaiian on Friday) sixth and seventh. USAC's Mike Boat, Kaylene Verville and Shon Deskins also made the top ten. First place for Freitas paid about $2,000 - standard fare for the mainland contingent but much larger than normally seen at this track.

"I consider the weekend a total success," USAC Race Director Hal Burns said at the conclusion of the weekend, only 90-odd amazing days in the making. "We had our speed bumps, of course, getting into the groove. I think everyone got along well and had a lot of action amid the racing. The competition was tough on top of the action. The local group was fast and competitive, even though they might have been handicapped with running gasoline and flat-topped piston motors. Dean did awesome today. He started back a little bit and worked his way up, and Ron did a similar job on Friday. For me, it was pretty close to a ten as you can get."

"Day races are never fun because the track always gets dry and slick," adds Lane. "We went out for our Trophy Dash, and the track was already going away and starting to get really dry. When we started the main event, the track was really dry with the sun beating down on it and the moisture starting to go away. We dropped back to fifth, worked our way back to second and thought we had a good car - we stayed right there for a while until Dean came around us and took the lead. Towards the end our right rear adjustable shock cable broke, so when so when the track started laying rubber, I was unable to adjust the shock back to where we needed it and dropped back to fourth."

The field settled down after Friday night's rough-and-tumble fracas, with dramatically fewer on-track incidents but also less passing for position. "These daytime conditions are not really conducive for passing," Boat admits. "I think for the weekend, I probably got the record for passing the most cars, but unfortunately that doesn't make you a winner or pay the bills. I can't figure out how to qualify here so we're always starting in the back, but I've been able to stay out of trouble and move forward. Next time back, we should be a lot closer if I can figure out how to qualify and keep the front wheels on the ground. In the feature I started to make a second lane, but without enough people jumping up and helping you, everyone running on the bottom just keeps throwing marbles up there. I had dusted it off and got a few, but then I had to fall back in line."

For Freitas, the one blemish on his memorable weekend came during Friday night's feature when he and local rival Larry Peterson (who had dabbled in some USAC competition on the west coast in recent years) collided while running 1-2. "I feel really bad about that. I was trying to get in real close and tight with him to race him hard off the corner. I misjudged it from my side, got on top of him and turned him around. I'd say that pretty much cost him the race. That's something I'm not proud of at all, especially since he's from Hawaii - not to take anything away from the USAC people on top of that. I feel he had the car to win and probably would've been the big winner the other night. It was a very unfortunate situation, and if I could turn back the clock, I'd really like to take that back. I want to apologize to him for that."

Friday night also saw some friction between the USAC and Hawaii contingents over officiating and accusations of rough driving, resulting in a flurry of post-race protests. "It amounted to more of a communications issue as far as getting the word out to what the rules are," says Burns. "There was confusion in reference to when a yellow flag comes out - whether the people involved in an incident go to the back of the pack or go back to the position they're in. The USAC rule requires everyone to go to the back. And that was our confusion point; our local competitors operate under a different rule, so we had to work that out. I think that worked out fine for today."

"It was a little shaky the first night - there were some rules differences that should've been settled ahead of time," Boat concurs. "It's not that anybody's right or wrong - it's just differences in rules. Our guys may be a little more aggressive and maybe caused a few problems, but I think all in all, everyone got along great and it was a very successful trip. I think it'll go 100% smoother (next time) - we all learned a lot about how to work together a little more."

While the rainout caused some juggling of itineraries to ensure all drivers could race, clean up and load their equipment for the cargo flight home, not everyone who came could make it back. "Unfortunately my main crew member and his wife had to leave this morning," notes Lane. "Their flight was for 7:30 this morning; that caused us to do a lot more work on our own, so we were a little short-handed, but it worked out all right."

Lane was among four USAC drivers who now take home traditional koa bowls as event trophies for either feature or Trophy Dash podium finishes. "Those are cool - it's definitely nicer than having the plastic trophies we're used to getting back in Arizona. They'll stay around for a long time, and we'll definitely get a lot more visual use out of them when put out for display."

Freitas, for whom koa bowl trophies are nothing new, spoke for the vast majority of the Hawaiian crowd in welcoming USAC's presence and its anticipated return, possibly as soon as next summer with Western States midgets. "I hope they really enjoyed themselves. They're a real class act. I'd like to thank them for some real clean racing out there today. These cars can get really squirrelly in tight quarters, so they're good, competitive racers. I really enjoyed this opportunity to race with them."