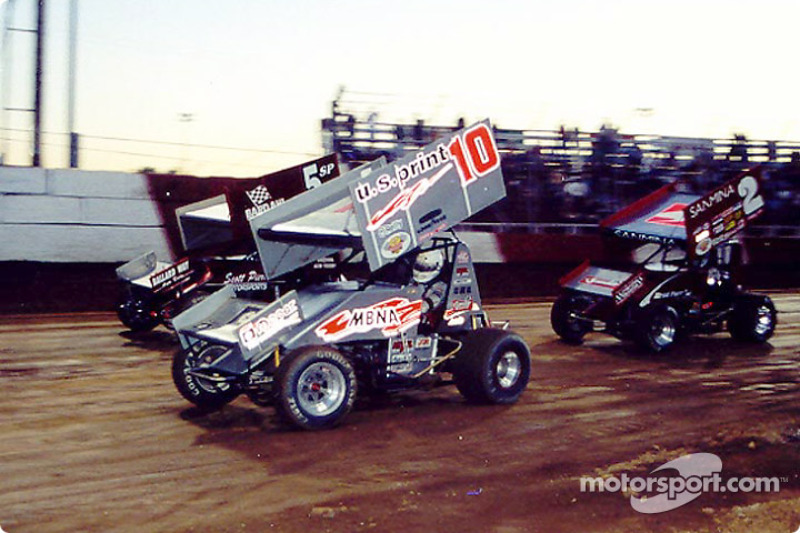 The 2014 season for the University of Northwestern Ohio All Star Circuit of Champions has been unique to say the least. There have been 11 different feature winners over 12 events thus far. And with the 32nd Annual Ohio Sprint Speedweek – featuring 9 straight nights of racing at 8 different tracks in the Buckeye State – ahead, there’s no reason to believe that streak of different winners won’t continue.

It all kicks off Friday, June 20 on Ohio Caterpillar Night at Attica Raceway Park. It will mark the 103rd appearance of the UNOH All Stars at “Ohio’s Finest Racing” speedplant.

The UNOH All Stars paid a visit to Attica in April with four-time series champion Dale Blaney (in photo) picking up his 100th career All Star victory. Blaney has three wins at Attica in 2014 including against the World of Outlaws. He has 20 career victories at Attica, 14 of which have been All Star wins.

For more information go to www.atticaracewaypark.com

The UMP DIRTcar Modifieds and Eldora Stocks will also be in action Saturday.

For more information go to www.eldoraspeedway.com

On Sunday, June 22, Speedweek moves to Waynesfield Raceway Park near Lima, Ohio. The one-third mile bullring has produced some of the most exciting Speedweek shows in recent years. Last year Brad Sweet drove to the Speedweek victory.

The tough trucks will also be in competition at “The Field.”

For more information go to www.waynesfieldmotorsportspark.com

The NAPA Auto Parts Wayne County Speedway near Orrville, Ohio will host the UNOH All Stars on Monday, June 24.

The All Stars paid a visit to one of the original series tracks on May 31 and local driver Lee Jacobs – his great-grandfather built the speedway – recorded his second UNOH All Star win in 2014 – the series’ only repeat winner this season. Last year during the Speedweek visit Oklahoma native Shane Stewart picked up the victory.

The late models and super stocks will also be on the racing card Monday.

Gates will open at 4 p.m. Monday for the Duffy Smith Memorial presented by Shearer Equipment, with racing slated to start at 7:30 p.m.

For more information go to www.waynecountyspeedway.com

Tuesday, June 24th finds the UNOH All Stars at Sharon Speedway near Hartford, Ohio. Another of the tracks that was part of the first Ohio Sprint Speedweek 32 years ago, the 3/8th mile oval fell victim to rain during last year’s Speedweek event. Two years ago local driver Brandon Matus scored his first ever UNOH All Star win.

The TUSA Mod Lites will also be on hand in a Mid-Atlantic regional event.

The track is home to not only current All Star point leader Dale Blaney, but his brother, Dave is part owner of the facility. Dave, a NASCAR Sprint Cup driver, has an All Star win at Bubba Raceway Park in 2014.

Gates will open at 4 p.m. Tuesday with qualifying slated for 6:30 p.m.

Adult admission is $22. Kids 13 and under are always free. Pit passes are $35. Advance ticket holders will be able to gain access at 3 p.m. for preferred seating.

For more information go to www.sharonspeedway.com

The UNOH All Stars return to Atomic Speedway near Chillicothe, Ohio on Wednesday, June 25. It has been a couple years since the All Stars raced at the high-banked bullring. It will be the first of two All Star events at Atomic Speedway as the series comes right back on July 3 for the traditional The Night the Stars Come Out.

The street stocks and sport mods will also be in competition.

Pit gates will open at 2 p.m. with grandstand gates opening at 4 p.m. and racing to get underway at 7 p.m.

For more information go to www.atomicspeedway.net

From there the Ohio Sprint Speedweek travels to “The Home of the All Stars” on Thursday, June 26 for the first of two visits to “The Track That Action Built” during the 9 nights of Speedweek. The All Stars have raced at Fremont Speedway a total of 112 times during the long history of the track.

Earlier this year Caleb Griffith scored his first career All Star win to open a double-header weekend at the track. Australian James McFadden followed with a $10,000 payday for his first ever All Star win as well.

The 305 sprints and dirt trucks will also be in action on I’m Your Guy Water Proofing Night.

For more information go to www.fremontohspeedway.com

On Friday, June 27th Ohio Sprint Speedweek heads to the high banked quarter-mile of Limaland Motorsports Park which is operated by the All Star’s title sponsor, the University of Northwestern Ohio.

Last year Haudenschild would score the speedweek win, his second of the week. In 2013 the speedweek event was rained out, but the two prior years (2011 and 2010) saw first time All Star winners in Kyle Sauder and David Gravel.

Several of the track’s tough weekly 360 race teams will give the All Stars a great challenge.

Also on the racing card for Elwer Fence Night will be the modifieds.

For more information go to www.limaland.com

Last year Dale Blaney continued his dominance of big paying shows at “The Track That Action Built,” taking home the Speedweek finale. It marked his only win during Ohio Sprint Speedweek in 2013.

Ohio Speedweek always draws in the best talent from the Midwest, western Pennsylvania, along with the All Star regulars and usually a few surprises. In seasons past NASCAR Sprint Cup stars Tony Stewart and Kasey Kahne competed at several speedweek events.

For more information go to www.allstarsprint.com.

Smoke has risen: Tony Stewart wins in first race back in a Sprint Car - video