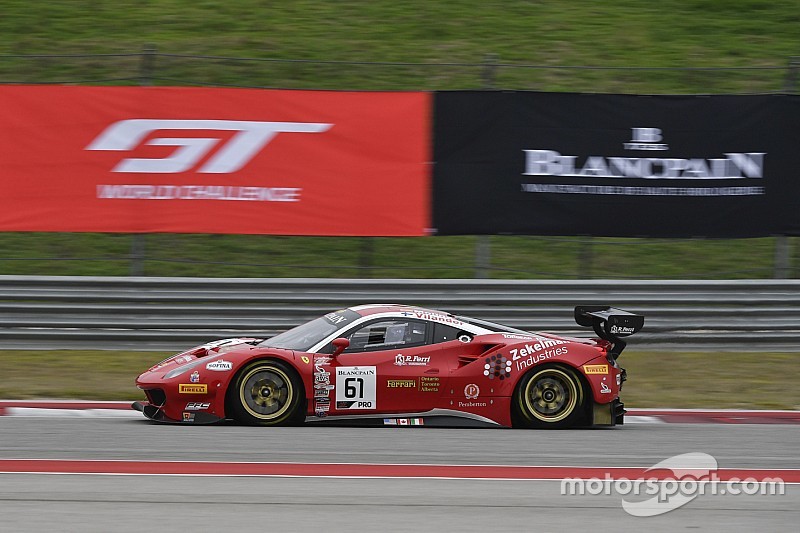 Miguel Molina recovered from a slightly slow restart late in the race to send his R. Ferri Motorsport Ferrari 488 back past Andy Soucek’s K-PAX Bentley Continental and win the second Blancpain GT World Challenge America event at Circuit of The Americas.

Polesitter Kyle Marcelli’s Racers Edge Motorsports Acura NSX held off Maximilian Buhk’s P1 Motorsports Mercedes AMG GT easily into Turn 1, although Buhk had to very aggressively defend second from Toni Vilander’s R. Ferri Motorsport Ferrari 488. Ultimately it was to no avail as the Finn grabbed second before the first lap was over.

Another man making moves was Scott Hargrove who took his Wright Motorsports Porsche 911 past Jeff Segal’s TR3 Racing Ferrari to snatch fourth. But everyone’s effort was put into perspective by Colin Braun who sent the DXDT Racing Mercedes AMG GT from 15th to sixth on that opening lap!

Braun then lost sixth to Richard Antinucci’s US RaceTronics Mercedes, but soon Antinucci was being served a drive-through penalty for having all four wheels over the pitlane exit on the run up to Turn 1 on the opening lap.

Marcelli’s lead lasted just one more lap as he couldn’t keep Vilander behind, and the Ferrari driver bullied the Acura out wide in completing the pass. Vilander was impatient to get on with the program, and swiftly chiseled out a 2sec lead, as Marcelli was left to hold off Buhk.

Braun’s fabulous start wasn’t enough to keep his opposition at bay forever, and Michael De Quesada in the Alegra Motorsports Porsche deposed him on Lap 4, with Alvaro Parente’s K-PAX Bentley Continental doing the same a lap later. The second Bentley (yesterday’s winner) was at this point piloted by Maxime Soulet who ran only 12th and then had his disappointment compounded when he was pinged with a drive-through penalty for spinning Anthony Imperato in the second Wright Porsche on the opening lap.

Parente moved up to sixth on Lap 13 when he passed De Quesada’s Porsche in the intricate corners that end the Circuit of The Americas course, but the Bentley was already 21sec off the lead. By this time, the Marcelli vs Buhk battle had drawn once more within 2sec of leader Vilander, and 8sec clear of fourth placed Hargrove. Finally at the end of Lap 15, Buhk’s pressure paid off, Marcelli making a minor mistake exiting Turn 19 and leaving enough room for Buhk to dive down the inside into Turn 20.

Buhk then ditched the Acura and started homing in on the lead Ferrari, and by Lap 19 the lead was under half a second.

De Quesada was the first of the top 10 runners to dive into the pits as the pit window opened with 50mins to go, and he handed off to Daniel Morad.

Next time by, Vilander and Marcelli pitted to hand over to Miguel Molina and Martin Barkey respectively, allowing Buhk a clear run to attempt to nail some fast laps and jump his teammate JC Perez into the lead once he handed over. However, Perez was immediately struggling to get tire temp and Racers Edge’s pitstop for Marcelli/Barkey was slow, so Molina’s lead was now 15sec.

Closest opponent to the R. Ferri Ferrari was Pat Long, who’d taken over from Hargrove in the Wright Porsche, while K-PAX had nailed an excellent stop for its #9, so that Parente’s co-driver Andy Soucek into third was all over the back of the 911.

The amateur Perez had recovered his composure and temporarily halted his Mercedes’ freefall down the order, but was soon coming under pressure from fellow Am driver Wei Lu who’d taken over the TR3 Ferrari from Segal.

Meanwhile the other Bentley had also received excellent service from K-PAX, so that Soulet’s co-drvier Rodrigo Baptista was hauling in Racers Edge’s amateur Barkey at 3sec per lap and on Lap 27 the big British beast was through into sixth. Its sister car was up into second the following lap, when Long got bottled up behind a backmarker just before the long back straight and Soucek easily hauled past.

Also on Lap 29, Lu deposed Perez to grab the Pro-Am lead and fourth overall, and Baptista knocked the former leading Mercedes back a further spot on Lap 30. Two laps later, he did the same to Lu to make it two Bentleys in the top four.

Suddenly everyone lost their margins with under 20 minutes to go as a collision between two backmarkers brought out the full course caution.

The restart with nine minutes left saw both Bentleys in second and fourth hauling alongside their immediate prey, yet both Molina and Long regained first and third respectively through the long sequence of turns down to Turn 10.

Sadly, Segal and Lu had their great run to the Pro Am lead end as the TR3 Ferrari pulled off the track, handing fifth place overall to Perez… until Perez got black-flagged for not respecting drive-through procedure.

Morad deposed Barkey in the closing stages to earn fifth overall for the Alegra Porsche, while 10sec ahead, Long defended cleanly to retain third ahead of Baptista’s probing Bentley. He was 2.7sec adrift of Soucek’s Bentley who in turn was 1.2sec behind winner Molina.

Barkey and Marcelli’s sith place overall was enough to clinch Pro-Am honors ahead of Gradient Racing’s similar Acura NSX driven by Ryan Eversley and Till Bechtolsheimer, and Wright’s other Porsche, that of Imperato and Dennis Olsen.

Amateur honors went to the Squadra Corse Garage Italia Ferrari 488 of Martin Fuentes and Caesar Bacarella, ahead of the Autometrics Motorsport Porsche driven by Alan Metni and Joe Toussaint.