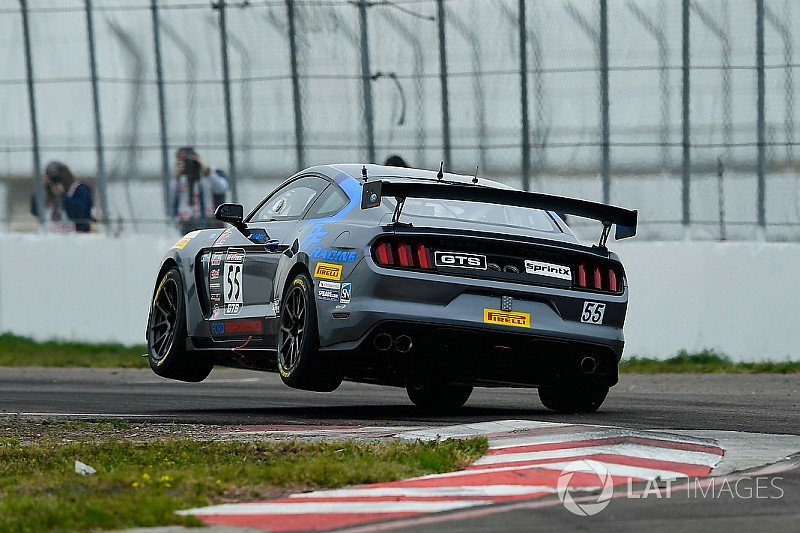 Jade Buford and Scott Maxwell took full advantage of a slow stop from the SIN R1 of Harry Gottsacker to drive their PF Racing Ford Mustang to Victory Lane at COTA, winning by 1.3sec.

At the start, polesitter Gottsacker got the jump on Maxwell’s Mustang, as did Vesko Kozarov in the Audi R8, but the field went under yellow almost immediately as Muller’s BMW M4 swiped across into Mike Hedlund’s Audi on the run to the first corner, while Dean Martin’s Mustang, Matt Fassnacht’s Mercedes-AMG GT4 and Toby Grahovec’s M4 completed the top six.

At the restart, all went well until the exit of Turn 1 – the Panoz of Ian James/Matt Keegan spun 180 degrees, and all avoided him until Sabo’s McLaren ran into him.

Two full-course cautions and zero racing laps – not a great stat. Finally the seventh lap was green and clean, and Gottsacker checked out as Maxwell and Martin struggled to muscle their Mustangs past Kozarov’s R8. Maxwell managed it, Martin had to bide his time, but in waiting, he got passed by Grahovec’s charging BMW M4.

Then came the rash of pitstops, with Jade Buford replacing Maxwell and emerging with the #55 Mustang in front, chased by Michael Cooper in the #11 Chevrolet Camaro he’d taken over from Tony Gaples, Chris Ohmacht having taken over from the M4 from Grahovec, Drew Staveley in the #55 Ginetta, Lawson Aschenbach sporting front-end damage in the second Blackdog Speed Shop Camaro which had been driven by Andy Pilgrim and Gottsacker running solo in the SIN but having suffered a slow pitstop. However, on Lap 13, Staveley passed Ohmacht for third, while Gottsacker demoted Aschenbach.

James Sofronas was charging hard into fifth in the Audi R8 he shares with Alex Welch, but Ohmacht kept tumbling down the order down to seventh on Lap 14, and was soon under heavy pressure from Nick Wittmer who’d taken over from Samantha Tan in another M4. Wittmer passed Ohmacht on Lap 15.

Up front, Cooper kept trying to chip away at the leader, but couldn’t get the gap below 2.5sec. The real battle was 4sec behind him, Gottsacker finally passing Staveley for third on Lap 17, and then starting to home in on the Camaro.

On Lap 19, Aschenbach had to cede sixth place to Wittmer’s M4, while Sofronas got around Stavely for fourth. Then into Turn 1 on Lap 21, second place changed hands as Gottsacker dived to the inside of Cooper’s Camaro to grab second. Could he close the three-second gap to leader Buford? With one lap to go it was down to 1.8sec…

Gottsacker, no doubt ruing the slow stop earlier, trimmed another half second off the lead but came up 1.3sec short of the Buford/Maxwell Mustang, with Cooper finishing another 1.5sec back, chased hard by Sofronas.