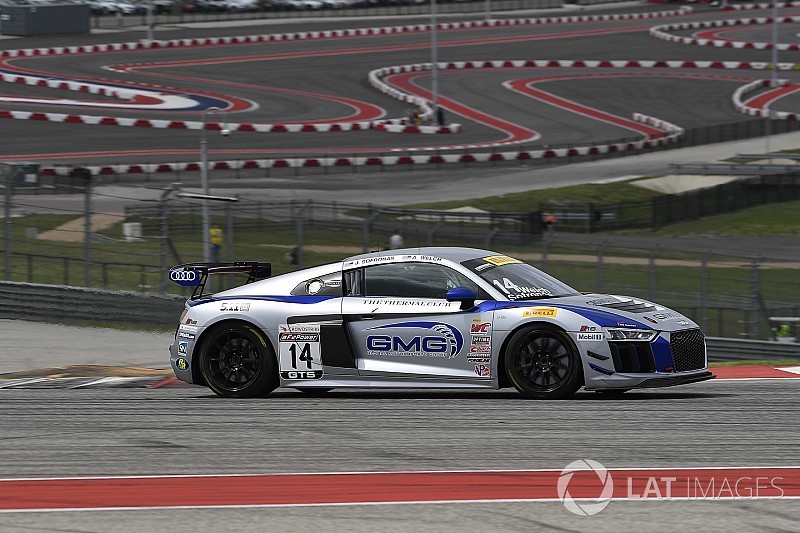 The GMG Audi R8 of James Sofronas and Alex Welch had just made it into the lead ahead of a pair of BMW M4s before COTA’s second GTSX race ended under a full-course yellow for stranded cars on the racing surface.

A damp track – and therefore split strategies between wet and dry tires – helped define the race, as did a Lap 3 collision between Jade Buford’s Ford Mustang  and Lawson Aschenbach’s Chevy Camaro. The melee cost Buford a drive-through penalty and ended Aschenbach’s challenge.

As the pitstops among the leading runners got underway, there was briefly a BMW 1-2-3 with Steven McAleer and Nick Wittmer 15sec in front of third place.

Following the stops – a slow one for McAleer to hand over to Justin Raphael – Samantha Tan, who’d taken over from Wittmer, was out front, chased by Welch’s GMG Audi, Daren Jorgensen’s BMW M4, Dean Martin in the Kohr Motosports Mustang, and Harry Gottsacker in the solo-driven Racers Edge SIN R1.

Recovering a broken down SIN brought out a full-course yellow, and the green arrived with 13min40sec on the clock. Tan initially held onto her lead, but Welch’s Audi moved up, passing Raphael for second and was soon menacing her. Further back, Martin’s Mustang had tagged a backmarker BMW and lost a spot.

Welch finally dived past Tan for the lead at the end of Lap 17, and Raphael followed through on the exit of the final turn. Tan should have gotten another chance when a full course yellow flew again, this time for a McLaren which had stopped on the racing surface on the main straight but other cars needed recovery too, and time ran out under this yellow.

Tan had nonetheless achieved a podium finish ahead of Gottsacker’s SIN, with Al Carter/Aurora Straus’ amateur-class-winning BMW M4 ahead of the Paul Holton/Ray Mason-driven Compass Racing McLaren 570S, completing the top six. Drew Staveley (solo) was seventh in the Ginetta G55, and second of the all-amateurs, with the Buford/Scott Maxwell Mustang recovering to eighth overall, sixth in the Pro/Am class.