Back on a street circuit for trio of races in Toronto 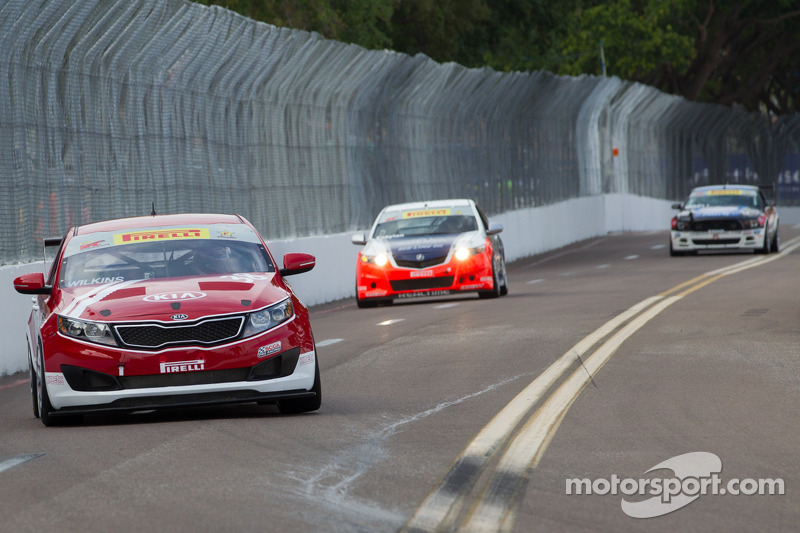 Pirelli World Challenge was at Lime Rock Park this past weekend, and now the teams and their drivers are preparing for the Toronto Exhibition Place race on the streets in the Canadian city for the first time since 2010.

Toronto, ON - The Pirelli World Challenge heads straight from Lime Rock Park north of the border to Exhibition Place and the streets of Toronto this weekend. All four classes – GT, GTS, Touring Car and Touring Car B-Spec – will be in action. GT and GTS drivers compete in Round 10 of the championship while TC and TCB drivers race a Saturday doubleheader with Rounds 7 and 8. The last time the series raced on the temporary street circuit was in 2010 with GT, GTS and TC classes in action. Additionally, GT and GTS raced at Toronto in 2007.

In 2010, Randy Pobst (GT), Peter Cunningham (GTS) and Nick Wittmer (TC) scored class victories. Pobst also won GT in 2007, with Cunningham taking that year's TC class win in Toronto. More than a dozen drivers entered for this year's only Canadian stop on the Pirelli World Challenge schedule have prior PWC experience on this street circuit.

There will be a substantial amount of local flavor in the field with Fred Roberts (GT), Mark Wilkins (GTS), Remo Ruscitti, Tom Kwok, Gary Kwok, Jonathan Young and Alain Lauziere (TC) and P.J. Groenke (TCB) all looking for a victory on home soil. The tight, 1.755-mile, 11-turn course will test the more than 50 drivers entered across four classes to stay off the barriers while still pushing as hard as possible.

Lime Rock Park turned the tides in the battle for the GT class championship. Defending GT class champion, Johnny O'Connell of Flowery Branch, Ga., in the No. 3 Cadillac Racing Cadillac CTS-V.R, scored a podium in Round 8 and his third win of the 2013 season in Round 9 to close to within 31 points of the championship lead (990-959).

James Sofronas, of Villa Park, Calif. and driver of the No. 14 Mobil 1/GMG Audi R8 LMS, still holds the lead but finished off the podium in both races at Lime Rock. Sofronas also has three wins this season, but he has only scored one podium finish in the last four races.

O'Connell's teammate at Cadillac Racing, Andy Pilgrim, of Boca Raton, FL in the No. 8 Cadillac Racing Cadillac CTS-V.R, finished second in both races at Lime Rock and now sits third in the championship, with 864 points. Pilgrim has yet to win in 2013 but has five podium finishes in the last six races.

Pilgrim and Randy Pobst, of Gainesville, GA and driver of the No. 6 K-PAX Racing Volvo S60, are locked in a tight battle for third place in the standings. Pobst is just 14 points behind Pilgrim and has four podium finishes in the last five races.

Mike Skeen, of Charlotte, NC in the No. 2 Hawk Performance Chevrolet Corvette, won Round 8 at Lime Rock and now sits fifth in the standings. Skeen won in Canada last year when he swept the GT class races at Canadian Tire Motorsports Park at Mosport, and seeks a rebound after a mechanical issue took him out just after the start in Round 9. Tim Bell, of Los Altos, CA, in the No. 12 Hawk Performance Nissan GT-R completes CRP Racing's two-car lineup.

Sofronas' teammates at GMG looking to provide him the necessary support this weekend are Duncan Ende, of Los Angeles, in the No. 24 STANDD.org/Merchant Services Audi R8 LMS, and Bill Ziegler, of Ponte Verde, Fla. in the No. 95 Swisher Racing/GMG Audi R8 LMS.

Pobst's teammate at K-PAX Racing, Alex Figge of Denver, CO, in the No. 9 K-PAX Racing Volvo S60, is a winner earlier this year on the streets of St. Petersburg. Figge has four prior open-wheel starts in Toronto.

Tim Pappas, of Boston, MA in the No. 54 Black Swan Racing Mercedes-Benz SLS AMG C63, finished seventh and sixth at Lime Rock and is locked in a tight battle for sixth in the championship with Figge and Ende. Entering Toronto, Figge has 668 points with Pappas on 656 and Ende on 651.

Jack Baldwin, of Marietta, GA, scored his third win of the 2013 Pirelli World Challenge GTS class season in Round 9 at Lime Rock Park last week. That win, coupled with another podium in Round 8, increased his lead in the championship from 86 to 123 points heading into this weekend in Toronto. Baldwin drives the No. 73 Motul/StopTech/Foametix Porsche Cayman S for GTSport Racing with Goldcrest, with his teammate Buz McCall of Boca Raton, FL, in the No. 72 Motul/StopTech/Foametix Porsche Cayman S.

But the local support at Exhibition Place will come for Kinetic Motorsports' Mark Wilkins, of Toronto, in the No. 38 KIA Motors America KIA Optima. Wilkins enters Toronto on a hot streak of four podium finishes in the last five races, including a win at Round 6 in Detroit, just south/west of Windsor, ON and the Canadian border. Wilkins seeks a victory in front of his home fans, which would no doubt help his championship chances. Adding support is his teammate Nic Jonsson, of Sweden, in the No. 36 KIA Motors America KIA Optima, who finished fifth in Round 9 at Lime Rock and enters Toronto 10th in the series points standings.

RealTime Racing's two Acura TSX entries sit fifth and seventh in the GTS championship points standings going into Toronto. Defending GTS Drivers' Champion Peter Cunningham, of Milwaukee, WI, in the No. 42 Acura/HPD/RealTime Acura TSX has continued his consistent run of finishes with his sixth top-five finish of the season in Round 8 at Lime Rock. Teammate Nick Esayian, of San Diego, CA, recovered to finish ninth in Round 9 after an accident in Round 8 in the No. 34 Acura/HPD/RealTime/Red Line Oil Acura TSX.

Splitting the two is Alec Udell, of The Woodlands, Texas, who enters Toronto sixth in points in the No. 17 Motorsports Development Ford Mustang Boss 302R. Udell drove a storming race in Round 8 from 24th on the grid to eighth place, winning the Sunoco Hard Charger Award.

Ric Bushey, of Virginia Beach, Va., in the No. 51 Nissan/Motul/OSGiken/SPL/Sparco Nissan 370Z completes the 16-car GTS class. Bushey currently sits 14th in the GTS points standings and looks to improve on his best finish this year of 10th, set in Round 6 at Detroit.

Winchester, of Mason City, Iowa, scored his third win in Round 6 at Lime Rock in the No. 72 C360R/Ligion Industries/HPD Honda Civic Si while teammate Sandberg, of Allendale, N.J., won Rounds 4 and 5 in the No. 70 C360R/GearTie.com/HPD Honda Civic Si. Winchester leads Sandberg by 72 points, 769-693, heading to Toronto.

Their teammate, though, will be the one with the local support at his back. Rookie Remo Ruscitti, of Vancouver, Canada, may hail from the other side of the country, but is no less determined to score his first win in the No. 71 C360R/Ultimate Racing/HPD Honda Civic Si. Ruscitti has five podiums in six races and is third in the standings with 565.

Orlando, FL's Jon Miller, driver of the No. 68 Titan Motorsports/Loudbasstard Honda Civic Si for Shea Racing, is due for his first podium of the season as he has five top-five finishes in six races, but no finish better than fourth. Miller has showed pace and tenacity all season and stands a good chance of breaking up the C360R podium monopoly this weekend.

Michael Cooper, of Syosset, NY, made a welcome return to the Pirelli World Challenge TC field at Lime Rock after winning the 2012 class championship. Driving the No. 1 Atlanta Motorsports Group Mazda Mazdaspeed 3, Cooper scored the Round 4 pole but was not able to secure a result that matched his pace. He'll be looking to fix that this weekend.

Bryce Miller, of Laguna Niguel, CA, was another late add to the Lime Rock field and will race once again this weekend in the No. 33 Revo/Germanautoparts/Brimtek Volkswagen Jetta GLI.

Besides Ruscitti, there will be four other Canadians looking for success on home soil in the TC class. Tom and Gary Kwok, of Markham, Ontario, will be entered in the Nos. 89 and 90 M&S Quality Produce Honda Civic Sis, respectively. The Kwok brothers have a considerable amount of experience both at CTMP and the Streets of Toronto and could both factor in top placements in class. Gary Kwok won Round 9 last year at CTMP. Jonathan Young, of Richmond, Ontario, joins the Kwoks at M&S Racing in the No. 91 M&S Quality Produce Honda Civic Si. Lastly, rookie Alain Lauziere, of Vaudreuil-Dorion, Quebec, will race in the No. 47 MINI Genuine Parts/Castrol/Team RMW MINI Cooper S. Lauziere also has experience running on the Exhibition Place temporary street course having competed in the Canadian Touring Car Championships in past years.

Robbie Davis, of Dallas, Texas, took the Touring Car B-Spec points lead after Lime Rock in the No. 37 MINI of Charleston Racing MINI Cooper. He won Rounds 4 and 5 and holds a 31-point lead in the championship over Ernie Francis Jr.

Francis Jr., of Davie, FL, in the No. 98 Breathless Performance Mazda 2, swept the opening tripleheader weekend of TCB at Circuit of the Americas. At Lime Rock, he finished second in Round 6 but struggled in Rounds 4 and 5.

The other winner thus far this season is Joel Lipperini, of Pittston, PA, in the No. 81 RaceLabz Honda Fit. Lipperini got on the scoreboard with a win in Round 6 and heads to Toronto fourth in points, 113 behind Davis.

Most of the field who competed at Lime Rock besides those three will also make the trip to Canada this weekend. Francis's father Ernie Sr. will again race the No. 2 Breathless Performance Mazda 2, and enters Toronto sixth in points with one podium and two top-five finishes this season.

Shea Racing will have one of the local drivers in the field, with P.J. Groenke, of Toronto, in the No. 66 MulliganGold/Tundra/Verax.ca Honda Fit. Groenke has six top-10 finishes in all six TCB races this season, with a best result of sixth in Round 6 at Lime Rock and comes into the Toronto race having a considerable amount of experience on the course having run Canadian Touring Car Championship races in the past at the facility. His teammate is Shea Holbrook, of Groveland, FL, in the No. 67 TrueCar/Hendrick Honda/Lucas Oil Honda Fit, who posted a pair of top-five finishes in Rounds 4 and 5 at Lime Rock. They enter seventh and eighth in points. Shea Racing will also have a third driver competing at Toronto - Brian Fowler, of Weston, FL, will be making his Pirelli World Challenge debut in the No. 65 Shea Racing Ford Fiesta.

Kinetic Motorsports' Russell Smith, of Buford, GA, posted three top-10s in the No. 38 KIA Rio 5 at Lime Rock, and returns this weekend looking for more.

Two other Mazdas are driven by Fernando Seferlis, of Panama, in the No. 77 Compulab Mazda 2, and David Alejandro, of Pembrook Pines, Fla., in the No. 99 Claims Support Inc.com Mazda. Seferlis is set to resume after an accident in Round 6, while Alejandro looks to climb from 10th in points.

Chris Capaldi, of Armada, MI, in the No. 22 Wolverine Bronze Company Ford Fiesta, keeps Ford on the grid. Fellow Michigander Ed Magner, of Portage, MI, rounds out the 14-car class in the No. 48 WTF Engineering MINI Cooper.

O'Connell and Aschenbach take poles in GT/GTS at Toronto