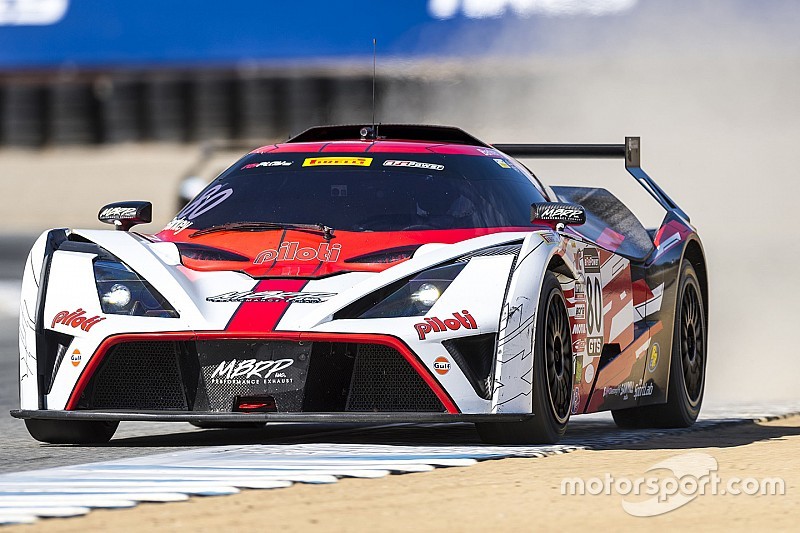 The Pirelli World Challenge’s GTS class put on a memorable race at Mazda Raceway Laguna Seca, as Martin Barkey scored his first win, and the championship contenders had a fascinating fight for the podium positions.

Polesitter Scott Heckert’s SIN R1 made a fine rolling getaway ahead of the KTM XBows of Martin Barkey and Anthony Mantella, as Tony Gaples’ Chevrolet Camaro made a brilliant start from 10th on the grid to claim fourth, before moving aside for teammate Lawson Aschenbach, the man on the championship trail.

Aschenbach didn’t stop there, moving past Mantella on the second lap to grab third. Within four laps, Nate Stacy had his Ford Mustang up to fifth having gotten around Brett Sandberg’s KTM Xbow and Scott Dollahite’s Lotus Evora. However, at this stage Stacy was 2.5sec behind fourth place.

Aschenbach was caught in the familiar and invidious position of trying to protect his tires while also pressuring Barkey for second and trying to stop Mantella’s KTM back through.

This plate-spinning worked until Lap 10, when Mantella grabbed third and started pulling away, as Stacy, Dollahite, Sandberg and Parker Chase’s Ginetta started closing on Aschenbach.

Suddenly the race was turned on its head as leader Heckert’s engine shut down at Turn 11, Lap 11 (bizarrely coinciding with teammate Chris Beaufait spinning to the back of the pack). This should have been Mantella’s opportunity to fight Barkey for the lead; instead, he slid wide on the exit of Turn 4 and allowed Aschenbach and Stacy ahead. Meanwhile behind them, Chase was now into the top six, having taken his Ginetta around Dollahite’s Evora which retired from seventh two laps later with a cut tire.

On Lap 15, with the race approximately halfway through its 50-minute allotment, Mantella dropped another place as Sandberg passed him to claim fourth. But could he do anything about the muscle cars ahead, which had now fallen four seconds behind Barkey? Stacy, in deference to his tires, had now fallen off the back of Aschenbach to just over two seconds, while keeping the XBows just far enough away to prevent one of them making a wild outbraking attempt.

Chase limped to the pits with a broken right-front wheel on Lap 24, allowing Gottsacker’s sister Ginetta into the top six ahead of Gaples. Behind the second Camaro, Mark Klenin had recovered from a first lap spin to get his Maserati GranTurismo into eighth ahead of the Jason Alexandridis-driven Aston Martin Vantage and Bill Ziegler’s KTM.

With 10 minutes to go, Stacy started to charge once more, with Sandberg and Mantella following closely as they bore down on Aschenbach. Soon the Kermit-colored Mustang was hassling and hustling the black Camaro for second… albeit while keeping his eye on Sandberg’s KTM ducking around in his mirror.

Finally at the top of the Corkscrew on Lap 30, Stacy’s pressure paid off as Aschenbach braked late and allowed Stacy to dive inside, which put him around the outside at the first compression and then inside for the fast left-hander that followed. The job was done; P2 was Stacy’s - a great recovery after his shunt in qualifying this morning.

With Aschenbach now directly in his gunsights, Sandberg was desperately trying to put the championship beyond reach by beating his prime competitor to third, but didn’t have the power to get past the big Chevy. His cause also wasn’t helped by having to compromise his line on occasion to keep Mantella behind him.

On the final lap, Sandberg was – as usual – able to carry more sped through the Corkscrew than Aschenbach so that he was right there and partially alongside into the brake zone for Turn 11. When the Camaro hesitated under acceleration on exit, both Sandberg and Mantella ducked through and the Camaro sputtered over the line in fifth. The title was Sandberg’s.

This overshadowed the fact that up front, Barkey scored his first-ever PWC win. Sure, it was a gift from Heckert’s sick SIN, but Barkey knew what to do with it and ran flawlessly to the checkers, to beat Stacy’s Mustang by six seconds.