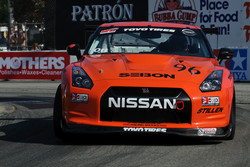 ANGLETON, Texas - After missing the second half of the 2010 SCCA Pro Racing World Challenge season, Brass Monkey Racing returns with a vengeance in 2011 with its pair of Nissan GT-Rs. The Pirelli World Challenge season starts March 25-27 at the Honda Grand Prix of St. Petersburg, in Florida.

Brass Monkey introduced the Nissan GT-R to North American racing in 2010, but the season was cut short after five of 12 races; the team electing to focus the rest of the year on development for 2011. The team expects that development will put its pair of orange GT-Rs at the front of the field, battling for race wins, the Manufacturers Championship and the Driver’s Championship with pilots Tony Rivera and Steve Ott.

“The GT-R is a supercar and tuned to be a world-beater on the street,” Rivera said. “One of the goals of this project has been to utilize as many stock components as possible—more than the other cars in World Challenge GT. While the suspension is well suited for street performance, it didn’t quite translate to the racetrack, at least not in World Challenge.

“There were a few modifications that we needed to spend time on in the chassis and suspension department and I believe that the changes we’ve made will really improve the car on the track, particularly with the new Pirelli slick tires.”

Rivera returns for this third season of World Challenge competition. He was the breakout star of the 2009 season, winning his first-career race (Sebring) and adding another victory (Road America) en route to a third-place finish in the Championship driving a Porsche. He will again pilot the #97 Brass Monkey Racing Nissan.

Ott, of Houston, Texas, is anxious to get to St. Petersburg.

“I’m looking forward to getting back on the track,” Ott said. “It feels like forever since we last raced [Mosport in May 2010] and I’m excited to see how the changes help us stack up against the competition.”

The former Continental Tire and Atlantic Series standout has stayed sharp since May competing in a variety of Club Racing events. Ott will be back in the same, albeit improved, GT-R as 2010, but changes from #96 to #98.