Cadillac and O'Connell second at Mid-Ohio 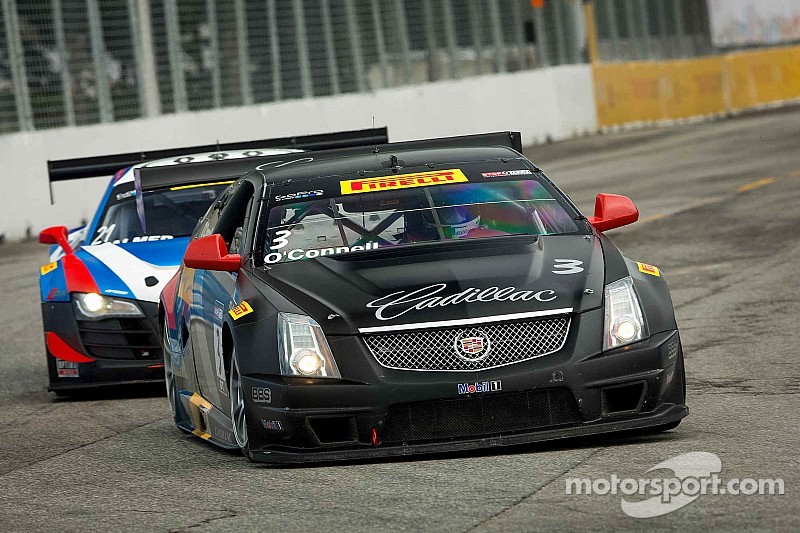 After a difficult qualifying session this morning that had Johnny O'Connell (Flowery Branch, Ga.) seventh and teammate Andy Pilgrim (Boca Raton, Fla.) ninth the duo took the standing start in their Cadillac CTS.V.Rs in dry conditions from the fourth and fifth rows on the GT grid.

O'Connell was able to get a strong get away and was into second place by Turn Three of the opening lap. A full course caution stopped the action after just one circuit of the 2.2-mile, 13-turn track. On the lap seven restart O'Connell slipped to third and feverishly defended his position. On lap 13 sprinkles of rain began to fall and three laps later a full course caution flew for wet conditions. As some competitors decided to pit for rain tires, including Mike Skeen the overall leader of the race, the Cadillac Racing crew had O'Connell stay out as the clock was still ticking.

On lap 20 a red flag flew stopping the action with O'Connell being the first car behind the Cadillac CTS.V Pace Car. Minutes later the checkered waved and per the rules the finish was set based upon the last lap run classifying O'Connell in second position. Pilgrim pitted for rains a lap earlier, returned to the track and was classified in seventh.

"I was able to get some good traction at the start and go from seventh up to second at the start," O'Connell said. "The effort from the team has been great here this weekend. The car is as good as I have ever had at Mid-Ohio. Although we only qualified seventh, that is a balance of performance result. Like race number one in Toronto, we were able to hang around the front and it came out better than expected. When the rain started I had a couple of big moments. Going into Turn One I was crossed up a little and I think guys were going off behind me.  When they stopped the race I was first behind the CTS.V Pace Car. But per the rules they revert to the last complete lap. We brought home maximum points on a day when it was better to be lucky than good."

"I was able to get a pretty good start," Pilgrim said. "I was back in ninth so there were a lot of cars ahead of me. Going into Turn Two it got stacked up pretty good. I was around seventh at that point. We had a long yellow after one lap. On the restart I got passed by the Bentley and an Audi. It is hard to pass here when you don't have a lot of straight away speed. That is frustrating. When the rain came I got by a couple of cars. We made the call to come in late for rains and that cost me a few positions."