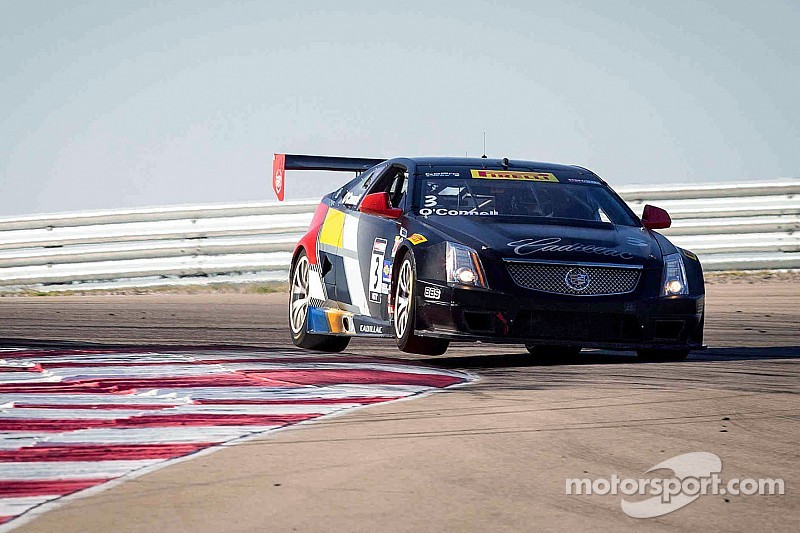 Thorne and Baldwin win the battle, O'Connell and Aschenbach win the war.

Johnny O'Connell (GT, in photo) and Lawson Aschenbach (GTS) have captured class championships for the Pirelli World Challenge 2014 season, following the conclusion of Saturday's final round of the season at Miller Motorsports Park. Additionally, Michael Mills has become the first driver to take home the Sportsman's Cup as top driver in the first year of GT-A.

Robert Thorne (GT) and Jack Baldwin (GTS) won in Round 16, the Pirelli World Challenge Nissan Championship Finale brought to you by Motul. Tim Pappas was the top classified GT-A driver.

"Big team effort, and I could not be more proud of the guys," O'Connell said. "The driver is just the quarterback. If you don't have a great team, good things won't happen. There's a saying where you should surround yourself with good people and at every level of Cadillac racing we have that. We're very fortunate, Andy and I, to represent the excitement that happens on the race track."

In GTS, the same three title protagonists fought for the title this season finale as last. Aschenbach, of Palm Beach Gardens, Fla., in the No. 1 Blackdog Speed Shop Chevrolet Camaro took the title with second at the finish. It is his second straight GTS title and fourth overall (2006 GT, 2011 TC).

"Never say die. I really have to say thanks to everyone at Blackdog Speed Shop," Aschenbach said. "This season we had some ups and some pretty hard downs that basically took us out of the championship.  But we kept fighting and that became our motto and we kept fighting and kept pushing and at the end of the day I am really proud to say that I am proud of what we accomplished this year, especially considering what we've been through."

Kia secured the GTS Manufacturer's Championship over Ford. It entered with a seven-point lead over Ford (88-81), got an additional point for pole courtesy of Nic Jonsson, of Buford, Ga., with the fastest lap in Round 15. Neither Kia finished in the top 10, but Ford was unable to win.

The race itself ran caution-free for 50 minutes and featured an incredible bout between Thorne, of Littleton, Col., in the No. 6 K-PAX Racing McLaren 12C GT3 and Ryan Dalziel, of Winter Park, Fla. in the No. 31 EFFORT Racing Porsche GT3 R.

Despite several attempts to pass, and despite encountering traffic late, Thorne was able to hold on for his first GT victory, and first for the K-PAX Racing McLaren this season. Thorne won by just 0.130 of a second, at an average speed of 82.296 mph. Thorne also won a Touring Car race at Sonoma in 2012.

"It was quite a battle, especially towards the end," Thorne said. "I had radio issues and lost communications to the pits and I wasn't sure actually how many laps were left. Every time I drove by and trying to hold off Dalziel, I was waiting for the 1 more lap and finally it came out.  It was a great day and a great day for the end of the season.  We had some struggles this year with the car and trying to get the launch to work.  Getting the launch and going right to the front shows we are going to be a big contender next year."

Pappas, of Boston, Mass., in the No. 54 Black River Caviar Mercedes-Benz SLS AMG GT3, atoned for a mechanical issue that sidelined him on Saturday to secure his second GT-A win of the season.

Marcelo Hahn, of Sao Paulo, Brazil, in the No. 0 Reiter Engineering Lamborghini Gallardo FL2 was second with GT-A champion Mills, of Angleton, Texas, third in the No. 41 EFFORT Racing Porsche GT3 R.

"It's an honor to be here with Johnny and Lawson," Mills said. "Chuck and I started this team basically for a one-off race deal and it turned into a full season in 2012 and full season in 2013 and we missed the championship by one point last year.  It's an honor for me to bring home the championship for Effort.  I have to thank everyone for letting me do this and the team for helping me do this.  I also need to thank my wife for letting me do this, it takes a lot of time and energy and thank the Bergmeisters, Nick Tandy and Ryan Dalziel for everything they've done."

Polesitter Nic Jonsson, of Buford, Ga., in the No. 36 DonorsChoose.org led the first seven laps before falling back with a half shaft problem. Meanwhile Mark Wilkins, of Toronto, in the No. 38 PutOnTheBrakes.org Kia Optima turned in a storming drive to climb from 17th to sixth by Lap 8, before overheating.

Baldwin, of Marietta, Ga., took the lead on Lap 9 in the No. 73 RESET-MD Porsche Cayman S and wouldn't look back for the remainder of the race en route to his third victory of the season.

"It was a great day for GTSport Racing, our sponsors and Porsche. The way the guys were able to adapt and overcome all of what we have endured this season is remarkable," Baldwin said. "The guys never gave up and to finish second overall with a win is a fantastic achievement."

Aschenbach was second with Drew Regitz, of Denver, Col., third for the second straight day in the No. 02 TRG-AMR North America Aston Martin GT4. Michael Cooper, of Syosset, N.Y., was fourth in the No. 28 Blackdog Speed Shop Chevrolet Camaro with Dean Martin, of Westland, Mich., fifth in the No. 50 Picture Cars East/Rehagen Racing Ford Mustang Boss 302S.

Reportedly a preliminary calendar for 2015 was circulated at the race that shows nine events, with a season starting in March at Circuit of the Americas and ending in September at Mazda Raceway laguna Seca.

Thorne takes first win in last race of the season