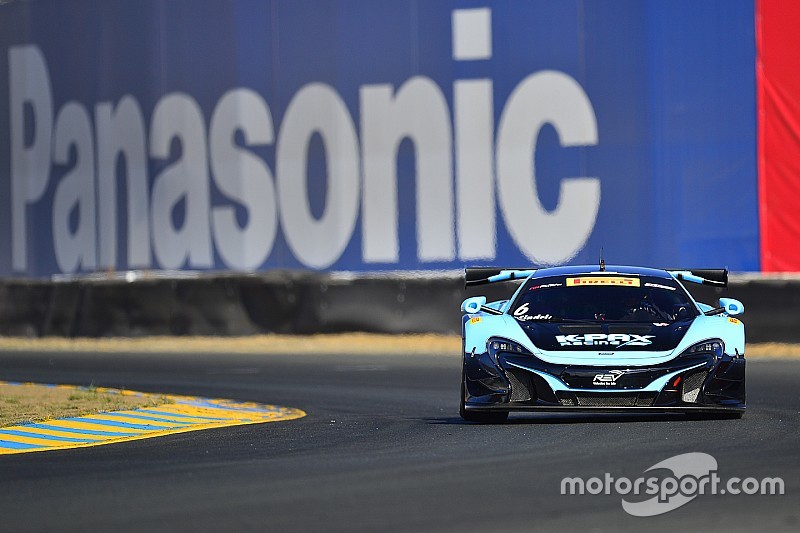 Behind the all-McLaren front-row was an all-Cadillac second row, four-time PWC champ Johnny O'Connell beating out Michael Cooper in their Cadillac ATS-V.Rs.

Another McLaren, the Gainsco/Stallings #99 ‘Red Dragon’ of Jon Fogarty was fifth, ahead of the top Porsche, that of Michael Lews in the Calvert Dynamics entry. The top 12 laps all cut below the existing track record of 1:33.095-seconds set by Renger van der Zande in a Porsche 911 GT3R during the 2015 season.

"With the cooler track conditions, I tried to conserve my tires in the first couple of laps and then throw in a quick one on the third lap," Cindric explained, "and that lap barely edged out my teammate for the pole.

“Of course, we have a great team here with K-PAX, REV and Flying Lizard and it is at our home track: the team is based right here at Sonoma Raceway.

“Hopefully, we can get a 1-2 in this race today. The strategy for me is try and win the race. I’m not in in the point battle like Alvaro. I do need to make sure Alvaro gets good points this weekend as he is 21 points out of the lead. It’s very important for the team to have Alvaro get the point lead heading to (Mazda Raceway) Laguna Seca in a few weeks.”

In GTA, Fuentes, going for his record tenth win in the class, took the No. 07 Scuderia Corsa Ferrari 458 to the pole with a 1:33.951-second lap. Second place in points Michael Schein continued his chase placing his Wright Motorsports Porsche in second ahead of Cooper MacNeil in the Alex Job Racing Porsche 991 GT3R to a best lap of 1:34.471-seconds, good enough for the third position on the GTA grid.

In GT Cup, Alec Udell's 1:37.235-second lap in the GMG Porsche 911 GT3 Cup was enough to put him ahead of Sloan Urry’s and Mike Hedlund’s similar cars.