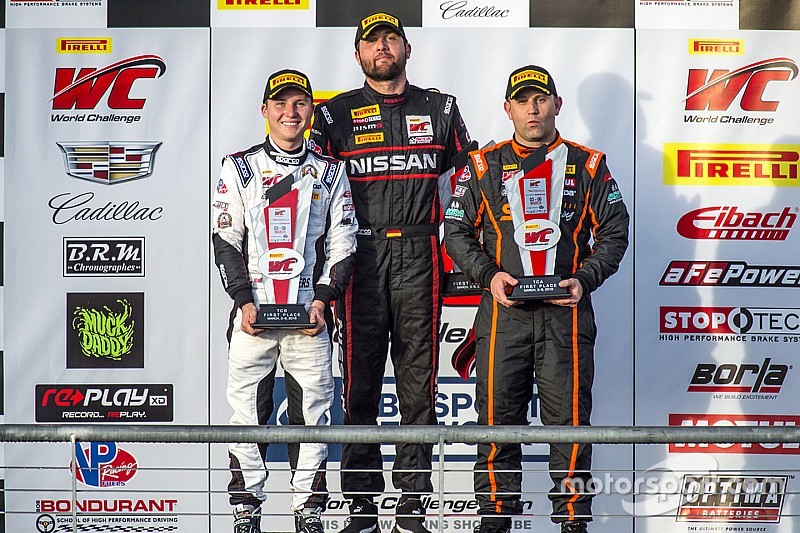 Vesko Kozarov, Elivan Goulart and Will Rodgers took the class victories in the opening round of the 2016 Pirelli World Challenge at the Nissan Grand Prix of Texas at Circuit of The Americas.

From the rolling start, Nick Wittmer in the Honda Ste-Rose Racing Honda Accord V6 Coupe led from pole position through turn 1 with Toby Grahovec in the #26 BMW M235iR for Classic BMW Motorsports in second but challenging. Meanwhile Kozarov, driving a Nissan/Nismo/Stance Nissan 370Z followed closely in third position and Tony Rivera, in the #97 Brass Monkey Racing Tiburon Motorsports Nissan 370Z slotted into fourth before being passed by Carl Rydquist, in the #34 CA Sport Nissan/Nismo/Stance Nissan.

On Lap 5, Grahovec passed Wittmer for the race lead, but soon Kozarov had passed the pair of them as they sliced and diced through TCB traffic. A lap later, Wittmer pulled off in turn 20 with a mechanical problem, but the remaining duo became a trio once more as Rydqvist caught up.

As traffic came into play in the closing stages of the race, Grahovec stepped up the pressure on Kozarov and tried a series of moves on the last lap. The two went side-by-side corner after corner battling for the win but Kozarov regained his advantage from Turn 16 and scored his eighth career PWC win. Rydquist completed the podium, with Rivera in fourth and Adam Poland in fifth after demoting Jason Fichter’s Shea Racing Honda Accord.

“There was a lot of scrapping going on in that one,” said Kozarov. “Too bad Nick [Wittmer] fell out, it would have been more fun for that final lap. Those guys (Grahovec/Wittmer) had some serious machines under them in the race.

“This is a good track. Not really my favorite but it was fun racing when you have a scrap to get to the finish.”

Andrew Rains, in a Honda Accord V6 Coupe, improved from his 21st starting position to 12th by Lap 5 and eventually finished eighth, earning him the VP Racing Fuels Hard Charger Award.

On Lap 10, Goulart executed a move to put himself into the lead over Wolfe, but Wolfe battled back to retake the lead.

However, on the final lap, Wolfe suddenly slowed with an issue he later speculated was fuel surge, and Goulart pounced on the final turn to grab the win. Powell followed Wolfe across the line to take third.

“That was a blast. We knew we didn’t have it down the straights but I wanted to stay within striking distance,” said Goulart. “Jason’s car started to bog on the next to the last lap. Then on the last lap, he really slowed and I was able to sneak around the outside and get the lead. It was an exciting finish.”

Tom O’Gorman, in the #94 Black Armor Helmets TNIA Honda Fit was in the lead after starting the race in third, as Michael Johnson in the #24 Tech Sport Racing Chevrolet Sonic moved into second with Henry Morse, in the #14 Hale Motorsports Mazda 2 in third. Polesitter Ted Hough, in the #69 Breathless Racing Mazda 2, had dropped back to fifth.

Rodgers, in the #65 Hale Motorsports Mazda 2 moved into third after starting at the back of the field due to a technical infringement found post-qualifying. By lap 5 Hough had moved up to third while Rodgers slotted into second, hounding O’Gorman for the race lead until eventually slipping past.

However, Hough closed in on Rodgers in the waning moments of the race, and the two drivers drag raced to the line with Rodgers only winning by a nose in his first professional race.

He said: “It was kind of a wild one. We had to start from the back due to some technical issues. I bought the car three days ago so it was my first time in the car, my first pro race and my first time at COTA. It was exciting at the end with the last corner on the last lap to win. Luckily, I was able to pull it off by about a foot I think.”

TC/TCA/TCB teams next take to the track for their second and final race of the COTA weekend, scheduled for 11:45 a.m. Central time on Saturday, March 5.

Shea’s back! Holbrook returns with new car but same ambitions