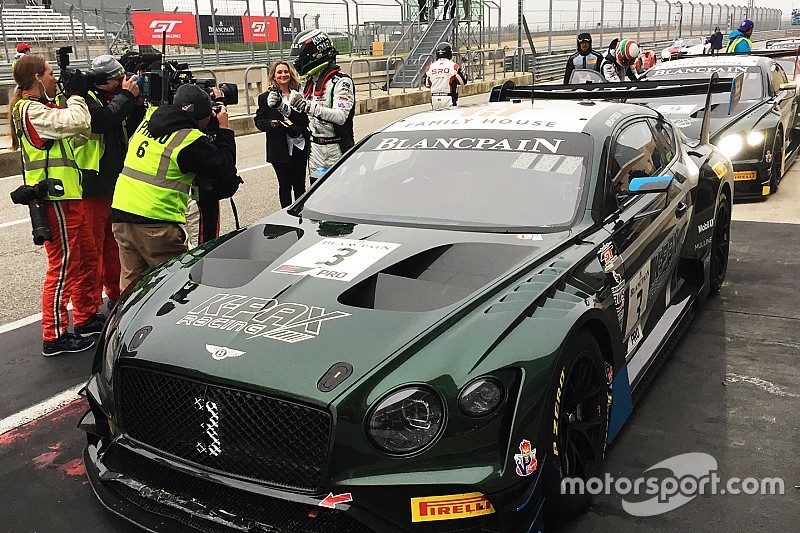 Bentley’s Rodrigo Baptista and Maxime Soulet overcame K-PAX Racing teammates Andy Soucek and Alvaro Parente to win the first round of the revamped Blancpain GT World Challenge America at Austin’s Circuit of the Americas on Saturday.

From pole position for the 90-minute event, Soucek led Baptista into Turn 1. On the exit, Baptista banged wheels with Daniel Morad’s Alegra Porsche 911, as Miguel Molina (R.Ferri Ferrari 488) fell back to fourth and into the clutches of Patrick Long’s Wright Motorsports Porsche 911 and the second Alegra Porsche of Marco Holzer.

During his defence, Molina received a warning flag for blocking – “he was just chopping my nose,” complained Long; Holzer was also warned, for exceeding track limits.

Just as the Bentleys were pulling clear out front, the race was neutralised on lap four as David Askew shunted heavily at the first of the Esses, spinning his Mercedes into the TecPro barrier. “Probably the hardest hit you can have here,” mused teammate Ryan Dalziel. “The main thing is he’s OK.”

The race was halted for barriers to be repaired, and restarted with the Bentleys holding sway again. Morad then divebombed Baptista twice, but each time the Brazilian was able to repass the Canadian, and pulled away to chase after Soucek again.

Morad fell back and came under attack from Molina, banging wheels briefly, with Molina making a move stick on lap 15 at the hairpin.

Leader Soucek pitted at the first opportunity to hand over to Parente, with Baptista following suit a lap later to Maxime Soulet – who rejoined ahead of Parente, who got held up in traffic on his out-lap. This, combined with a fine in-lap from Baptista, would prove decisive.

Parente caught and then attacked Soulet, almost nosing alongside on one occasion, before he straightlined the second element of the Esses after whacking a kerb. Parente regrouped and pushed Soulet hard again as the race entered its final 30 minutes, but he had to settle for second in a dominant Bentley 1-2.

Way behind them, Scott Hargrove took over from Long and established himself in third, with Toni Vilander (in for Molina) dropping to fourth. Wolf Henzler, who took over from Holzer, almost took out the sister Alegra car as he half-spun exiting Turn 1 and retired with damage. To make matters worse for Alegra, the Morad car, now in the hands of Michael De Quesada, was penalised on two separate occasions for exceeding track limits.

All that promoted the top Pro-Am car, the TR3 Racing Ferrari 488 of Wei Lu and Jeff Segal, to fifth.

Martin Fuentes and Caesar Bacarella won the Am class in their Squadra Corse Ferrari 488.