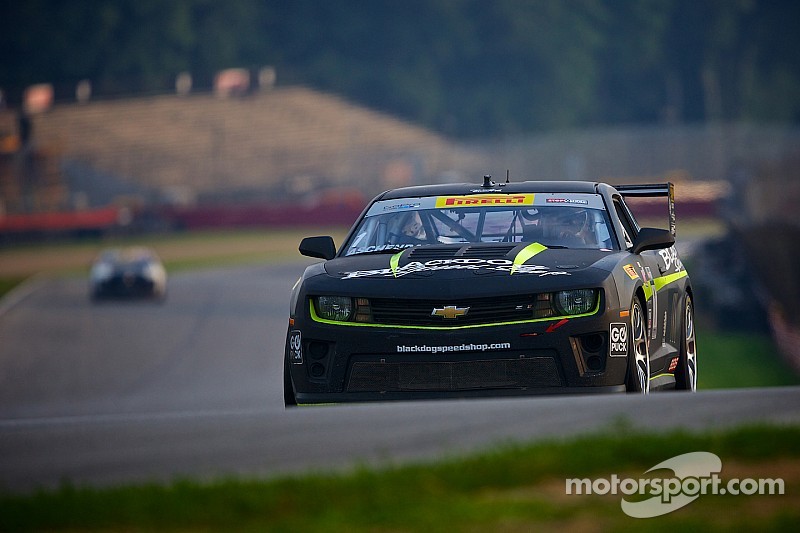 Pirelli World Challenge winners on Saturday repeat in second round.

Sunday's 50-minute sprint race ran with two yellow flag interruptions but compared to Saturday's rain-shortened event in mixed conditions, it was a welcome change of pace with a clear, sunny afternoon.

Dalziel, of Winter Park, Fla., launched cleanly from the pole position in the No. 31 EFFORT Racing Porsche GT3 R; he'd garnered the pole as a result of setting the fastest race lap in Saturday's Round 11. From the lead, he was able to complete a flag-to-flag victory over Mike Skeen, of Charlotte, N.C., in the No. 2 Hawk Performance Audi R8 Ultra. Skeen was within one to two seconds for most of the race and ultimately finished 1.547 seconds behind by the checkered flag.

Dalziel had won his first ever Pirelli World Challenge start at St. Petersburg 2013, only to have had his car be found out of compliance in post-race technical inspection. Then he won Saturday's race after it was red-flagged, so this marked a far more straightforward and simple victory – ultimately his second of his career.

"Condition-wise I thought it was harder today. It was harder racing today," Dalziel said. "Mike kept me on my toes the whole time. Definitely didn't want that last restart. There was a lot of pickup on the tires. I think both of us (Skeen) almost went off on the first lap trying to push to get away." Skeen finished second, for his second podium of the weekend. Despite the near miss on Saturday, Skeen was able to gain points in the championship on Sunday.

Third and on the podium for the sixth time this season was Anthony Lazzaro, of Atlanta, Ga., in the No. 61 R. Ferri Motorsports Ferrari 458 Italia GT3. Lazzaro passed both Johnny O'Connell, of Flowery Branch, Ga., and Andrew Palmer, of Chicago, in one fell sweep on Lap 12 to move into his ultimate finishing position, in what was awarded the Invisible Glass Clean Pass of the Race.

In GT-A, Mills, of Angleton, Texas, delivered another dominant performance in the No. 41 EFFORT Racing Porsche GT3 R en route to his fourth GT-A win of the season, and third consecutive. He will retain the points lead he captured on Saturday, following a 10th place overall finish.

"You couldn't have asked for a better weekend for us," Mills said. "We are blessed. I can't say enough about EFFORT, Porsche, my teammates, Chuck, and my family. A real solid weekend for us."

The same two drivers completed the podium as they had on Saturday, except in a different order. Albert von Thurn und Taxis, of Regensburg, Germany, finished second in GT-A in the No. 24 Reiter Engineering Lamborghini Gallardo FL2 with Jim Taggart, of Cary, N.C. third in the No. 7 Absolut/Porsche Porsche GT3 R.

Aschenbach gets by Martin for GTS win

GTS was also fairly straightforward, although Aschenbach, of Palm Beach Gardens, Fla., in the No. 1 Blackdog Speed Shop Chevrolet Camaro, required a pass of Dean Martin, of Westland, Mich., in the No. 50 Picture Cars East/Rehagen Racing Ford Mustang Boss 302S for the lead on Lap 7 to regain the top spot after starting from his second straight class pole. That was awarded the Cadillac CTS-V Move of the Race.

Martin had got into the lead anyway courtesy of a stellar standing start, where he gained 11 positions off the line to capture the Optima Batteries Best Standing Start. Several cars needed to take evasive action as two cars (Dan Knox, Butch Leitzinger) stalled and had to recover, and Martin made it through to the GTS lead.

The rest of the GTS pack had a chance to catch Aschenbach following the second full-course caution of the race that flew with 16 minutes to go when Jorge de la Torre, of McAllen, Texas, was stopped off course at Turn 11 in the No. 04 TRG-AMR North America Aston Martin GT4.

Aschenbach though, was thrilled with the win, his third of the season.

"Any time you can clean sweep a weekend that's a big weekend for the team and Chevrolet," he said. "I gotta say a big thank you to everyone at Blackdog Speed Shop. These guys have been working hard all year, we haven't had the results we wanted. We had a really fast Camaro, the thing was on rails all weekend. I kept telling everybody we are not out of it this thing yet. We had a mountain to climb last year and we climbed it. We can do it again."

Martin fell to fourth by the flag with Joey Atterbury, of Rochester, N.Y., fifth in the No. 33 Capaldi Racing/Ford Racing Ford Mustang Boss 302S for the second straight race.

As on Saturday, the Capaldi Racing No. 55 entry ran for charity, the Special Operations Warrior Foundation. In his series debut, 15-year-old Austin Cindric, of Mooresville, N.C., finished 14th in GTS in the No. 55 Ford Mustang Boss in what was a clean drive and his fourth race of the Mid-Ohio weekend. He also raced in all three USF2000 open-wheel races.

Of note, Mitch Landry, of Lake Charles, La., was the Sunoco Hard Charger with a gain of 14 positions from start to finish in the No. 97 VersaCrane/DeepSouth Ford Mustang Boss 302S. Landry finished 11th in GTS, one spot ahead of Mark Klenin, of Denver, Colo., who'd also turned in an excellent carve through the field to get up to 12th from the rear of the field in the No. 62 Invisible Glass/Premiere Copier/SCHOMP Aston Martin GT4.

O'Connell will still lead the GT points over Skeen, but Skeen gained 30 points as a result of his second place finish and O'Connell's fifth in Round 12 (1228-1146). Cadillac should retain its lead in the Manufacturer's Championship over Audi.

Mills has an unofficial 27-point lead over Henrik Hedman, of Ft. Lauderdale, Fla., in the No. 10 DragonSpeed Ferrari 458 Italia GT3 in GT-A. Hedman finished ninth in GT-A in Sunday's Round 12. In GTS, Kia teammates Wilkins and Jonsson are 1-2 with Kia leading Ford in the Manufacturer's Championship.

Cadillac Racing's O'Connell and Pilgrim 5th and 6th at Mid-Ohio