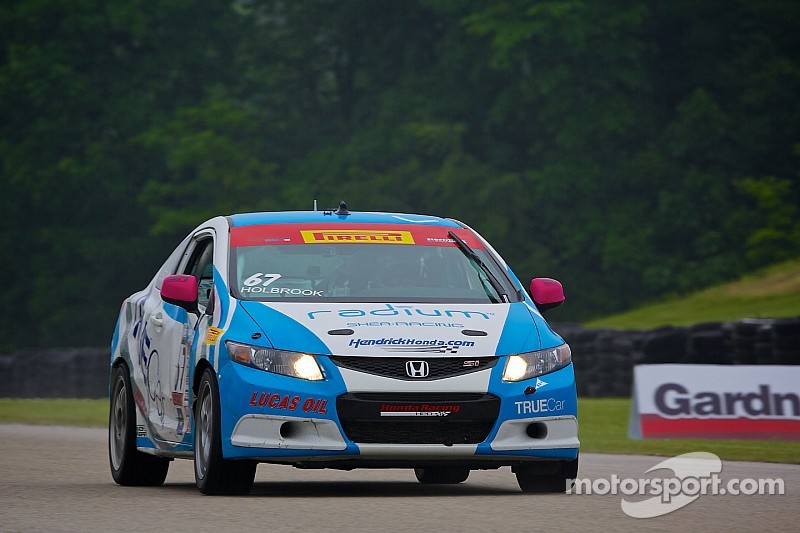 Those who emerged victorious on this occasion included Michael DiMeo, of Toronto, in the No. 71 Grand Alarms Honda Civic Si (TC), Shea Holbrook (in photo above), of Groveland, Fla., in the No. 67 TRUECar/Lucas Oil/Radium Honda Civic Si (TCA) and Chase Pelletier, of Brampton, Ontario, in the No. 12 ADA/Lilly Diabetes/American Honda Honda Fit (TCB). This marks Honda's third all-class TC win sweep of the season (Round 1, Barber; Round 5, New Jersey).

DiMeo and Adam Poland, of Mt. Vernon, Texas in the No. 11 Texas Track Works/Eastex Motorsports Mazda MX-5 put on an absolute show in battling for the TC class lead. At some sections of the 2.258-mile Mid-Ohio Sports Car Course, DiMeo's car held the edge, while Poland's Mazda had an advantage in other areas.

In total, the pair swapped the lead six times officially during the 25-lap race, with more unofficial changes due to the lead exchanging hands on the same lap. One of Poland's moves on DiMeo was awarded the Cadillac CTS-V Move of the Race.

What was set up for a thrilling finish ended two laps shy of the checkered flag as Poland had a brief spin from the lead exiting the left-handed Turn 11 on Lap 24. He ran wide, did a 360-degree pirouette and recovered, but lost the lead to DiMeo. Additionally, Steven Doherty, of Plainfield, Ill., in the No. 94 Nissan/GT Academy/Skullcandy Nissan Altima Coupe, was able to get past as well for second. DiMeo beat Doherty by 5.524 seconds, a misleading margin of victory considering DiMeo and Poland were within mere tenths of a second the first 23 laps. DiMeo expanded on his eighth win of the season after the race.

"That was the most nerve-wracking 40 minutes of my life, but also the most exciting because to go neck-and-neck with another competitor in a different car was awesome," DiMeo said. "Adam and I traded paint, positions like 10 times. What an awesome race and awesome weekend. I have to dedicate this to Children's Tumor Foundation, I had to win it for those guys. Second was not good enough today."

Poland, who sought his second win of the year, was disappointed yet still thankful for the opportunity to wage such a great battle for the win.

"That was a great race," Poland said. "Thanks to those guys, and Texas Track Works to let me off work. And thank you to Michael DiMeo for the race he put on. Top three is definitely worth it after a race like this."

Kevin Anderson, of Huntington Station, N.Y. in the No. 23 TechSportRacing.com Mazda RX-8 and Emilee Tominovich, of Laurel, Md., in the No. 19 Chesapeake Electrical Systems, Inc./Charter Financial Group Volkswagen Jetta GLI rounded out the top five.

TCA was more straightforward with Holbrook able to pass Jason Cherry for the lead on Lap 4, and then run comfortably and cleanly on a dry track to secure her fifth win of the season. She also took home the StopTech Brake Late, Finish First award.

The win also provided Holbrook a needed bounce back following late-race disappointment in Friday's Round 9.  "Mentally I needed something, and the crew got me there," she said. "For a split second, I was doubting myself. My crew chief Nick Chorley and dad Jeff Holbrook helped me pull it together. I knew I would be strong here in the dry, and I was praying for dry! I put my TRUECar/Lucas Oil/Women's Sports Foundation/Radium Honda Civic Si on the pole, then went to the win. This again puts us that much closer in the points."

Ernie Francis Jr., of Dania, Fla., finished second for the second day in a row in the No. 98 Breathless Performance Mazda MX-5.  Jason Cherry, of Gambrills, Md., in the No. 13 Autism Society of America/Avpro/Purposeful Architecture Mazda MX-5, was third. Points leader Jason Wolfe, of Mt. Vernon, Ohio, in the No. 36 Wolfe Trucking Kia Forte Koup, was unable to repeat his Friday performance and finished fourth.

While the TC lead battle was intense, the action throughout the top five or six all race in TCB. In all, four drivers exchanged the lead four different times over the TCB 23-lap race.

PJ Groenke, of Toronto, looked to follow up his fourth place in Round 9 with a podium in Round 10, and led the first two laps in the No. 66 Verax.ca/Tundra/Mulligan Gold Honda Fit. But he slid off track exiting Turn 1 later in the race and eventually dropped back.

Points leader Brian Price, of Middletown, Va., in the No. 51 Unlimited Racing/RP Performance Honda Fit then moved to the lead from Laps 3 to 6. Price had started eighth but quickly maneuvered his way to the front following a great start, a gain of seven positions off the line netting him the Optima Batteries Best Standing Start of the race.

Pelletier was able to pass the fellow Honda on Lap 7, before John Heinricy, of Clarkston, Mich., then got past them both by Lap 8 in the No. 35 Matick Chevrolet Chevrolet Sonic.

Heinricy held the lead for four laps but Pelletier, like Heinricy in his first Pirelli World Challenge weekend of the season, was able to get back to the lead on Lap 12 to take home the Invisible Glass Clean Pass of the Race. The young Canadian would not relinquish the lead the rest of the race, en route to his first career series victory.

"It was definitely a challenging race. The first standing start I've ever done!" Pelletier said. "Once we got that out of the way, there was a lot of passing, side-by-side driving. Pound out some laps. It was a bit of a challenge, I'm used to open-wheel, so I'm not used to traffic and Touring Cars going by."

Behind him, Price, in second and 14-year-old Nathan Stacy, of Owasso, Okla. in the No. 14 MDG/Ford Racing Ford Fiesta engaged with Heinricy and Tyler Palmer, of San Diego, Calif., in the No. 37 MINI USA/Mobil 1/Flying L Racing/ThePainter'sFriend.com/ Discount Tire Mini Cooper for a fantastic scrap over the remaining podium positions.

Ultimately, Price held on with Stacy third. Stacy, who gained nine spots from start to finish, was the race's Sunoco Hard Charger. For both drivers, it marked their first visit to the podium since Round 6 in New Jersey, when they finished in the same positions.
"That's why I picked this class," Price said. "Everybody raced clean the entire race. There was no touching. It was lead change after lead change, position change after position change."

Added Stacy, "It was a ton of fun. Best race I've had all year. The most trading back and forth. It was so clean. Some bruising, but that's TCB racing for you." Palmer and Heinricy rounded out the top five.

At the end of the month, the Pirelli World Challenge TC, TCA and TCB heads to Brainerd International Raceway in Minnesota for Rounds 11 and 12 of the season, from August 29-31.