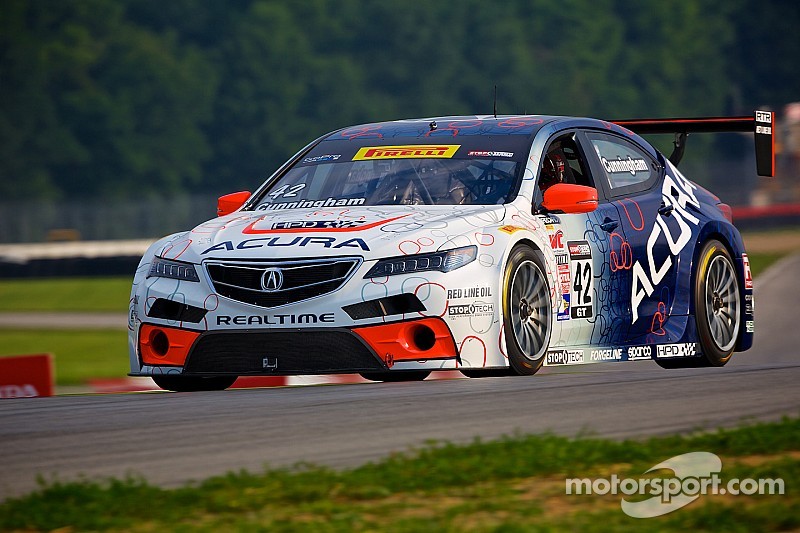 Contact after a restart and resulting pit stop proves costly.

The new 2015 Acura TLX GT race car continued to improve Sunday at the Mid-Ohio Sports Car Course, moving further up the field in the second race of the Pirelli World Challenge doubleheader, until contact while fighting for 10th place forced driver Peter Cunningham to an unscheduled pit stop, and an unrepresentative 19th-place finish.

Unlike Saturday’s rain-shortened opener, Sunday’s 50-minute timed event ran under sunny skies and warm temperatures.  Starting 19th in the 44-car field, Cunningham quickly made up six positions in his RealTime Racing Acura, when a multi-car crash in Turn 3 on the second lap brought out the first of two full-course cautions.  On the restart, while attempting to move into the top 10, contact from another competitor sent the Acura briefly off course, and then to pit lane for a quick damage inspection.

Cunningham quickly rejoined the race, but was now one lap down on the leaders.  The Acura ran problem-free for the rest of the contest, with Cunningham’s lap times showing near constant improvement. “The Acura TLX GT performed well all weekend, especially considering that this was our first opportunity to compete against this impressive Pirelli World Challenge GT field," he said. "The TLX gets faster with every lap.  In fact, the last lap of today’s race was our fastest of the weekend."

Developed from the production Acura TLX by HPD and RealTime Racing, the Acura TLX GT features HPD chassis and aerodynamic performance parts approved for Pirelli World Challenge competition.  It is powered by a direct-injected, twin-turbocharged V6 engine, developed by HPD from the production TLX, and will utilize all-wheel drive, as found in Acura’s SH-AWD system.

The Pirelli World Challenge resumes August 22-24 with another doubleheader weekend at the Raceway at Sonoma, located just north of San Francisco, California.